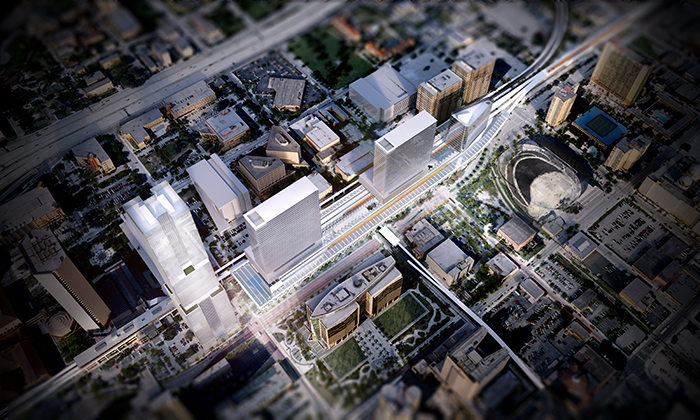 Station and transit-oriented developments will take up three million square feet on nine acres northwest of the Miami-Dade County Courthouse and two acres at Northwest Second Avenue and Sixth Street.

The architect for South Florida’s All Aboard Florida stations says he was inspired by the famous Roman aqueduct in Nimes, France.

Architect Roger Duffy of Skidmore Owings and Merrill designed a series of V-shaped girders for the Miami, Fort Lauderdale and West Palm Beach stations that echo the aqueduct.

He envisions the Miami station as an iconic gateway symbol like Manhattan’s Grand Central Station or Brooklyn Bridge. “Symbolically and visually it’s a land bridge that connects the courthouse district to the Overtown district and cultural district,” Duffy says.

The platform will run longer than three football fields, starting next to Miami-Dade County’s courthouse. Passengers will be able to board a train and get to Orlando International Airport in three hours.

From a functional standpoint, the elevation means that east-west streets will still be able to flow under the rail station. The design will incorporate open public spaces in the block near the courthouse and then another one at Northwest First Avenue and Sixth Street.

Mike Reininger, president and chief development officer, All Aboard Florida, said in an interview that the station and surrounding development will create a new urban realm in the streetscape, serving as the cross hair of an axis that runs down to the waterfront and the arts and entertainment district.

The concourse will have a retail core with amenities for passengers who will be able to easily move between All Aboard, Metromover and Metro Rail. The Tri-Rail Coastal link proposal would add commuter rail services from downtown Miami to Jupiter by 2020 – four years after All Aboard starts service.

Henry Flagler’s FEC Railway pioneered development of Miami, but the wooden downtown station was demolished in 1963 and city leaders subsequently urged that the train tracks be ripped up.

Barry Johnson, president and CEO of the Greater Miami Chamber of Commerce, said, “This is back to the future. This is where the city began with Henry Flagler. The growth on the water has been phenomenal, but the growth is now moving west. This will help transform this whole area and give a redevelopment shot in the arm to a part of downtown that has been overlooked.” ?