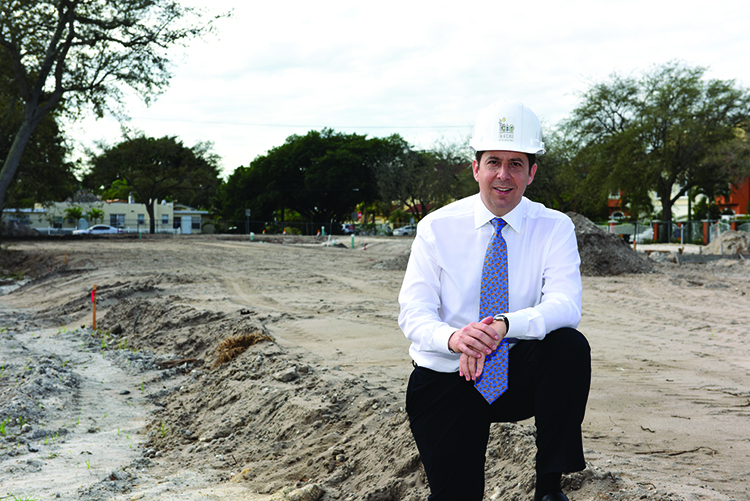 If you wanted to talk about the fall and rise of South Florida commercial real estate, BBX Capital would be a good place to start.

BBX (NYSE: BBX), which was once known as BankAtlantic Bancorp, in July 2012 took over about $500 million in assets that were criticized by regulators when they were part of the BankAtlantic portfolio. As part of the deal, BBX owed BankAtlantic buyer BB&T about $285 million, says Seth Wise, who is president of BBX Capital Real Estate.

Flash forward to the end of 2014 and BBX had paid back all but $14 million after monetizing $350 million of the portfolio. BBX Capital Real Estate is still sitting on about $200 million in assets with practically zero debt, Wise says.

Shareholders have done well with BBX recently. Its shares have gone from about $6 when the BB&T deal was completed to $15.45 in January.

BBX Capital Partners, another arm of BBX that includes operating companies, has bought a closet manufacturer in Canada and made a series of acquisitions in the confection business, including Hoffman’s Chocolate. BBX and BFC Financial Corp. (OTCQB: BFCF), which are both controlled by Alan Levan and long-term Vice Chairman Jack Abdo, also own all of Bluegreen, a resort company that has also had improved fortunes since the recession ended.

Wise said the key to BBX Capital Real Estate’s strategy was looking at each asset as an individual story. “We work it,” he says simply. Sometimes that’s involved getting entitlements to increase value or finding well-known names such as The Altman Cos., CC Devco (Armando Codina and Jim Carr) or Stiles as joint venture partners, Wise said.

With the legacy portfolio now heavily trimmed, BBX is also acquiring new properties. For an overview, see the sidebar below. ?

Here’s a list of some of the projects BBX has cooking, which spread throughout South Florida and also include Orlando and Tallahassee:

In December 2013, BBX purchased a commercial property in Palm Beach Gardens near The Gardens mall with three buildings totaling 145,000 square feet. Stiles Development then became a 60 percent partner in a joint venture.

Several factors could enhance the value of the property.

FPL has entitlements for 1 million square feet of office space across PGA Boulevard and Tri-Rail is expected to eventually have a station on the north side of the bridge.

Wise envisions a pedestrian-friendly development that would allow walkers to go under the bridge and over to Downtown at the Gardens. City approval is expected by summer.

BBX sold the site for $8 million to The Altman Cos. and then took $1.3 million of the proceeds to form a joint venture with Altman on the project. Residents are already moving into the first building of the 321-unit rental project on West Kendall Drive.

The lot used to be parking for BankAtlantic’s headquarters on Sunrise Boulevard and a BB&T branch faces the street. The project has 10 different models with two diferent architectural styles, so just about every one will look different, Wise said.

The homes will have three to four bedrooms, two-car garages and options including plunge pools and summer kitchens. Prices start at $649,000.  Details: newurbancommunities.com.

A joint venture with Procacci Development Corp. acquired three acres of real estate at the northeast corner of Bayview Drive and Sunrise Boulevard in Fort Lauderdale – across from where up to $1 billion in new development is planned at The Galleria Mall. The Bayview site currently has an 84,000-square-foot office building and a 7-Eleven. Wise said the partners are working on plans to turn it into a mixed-use development.

BBX owns 114 acres and has 14 acres under contract at this site in Hialeah, just west of Miami Lakes on I-75 and north of Lennar’s Aragon development. The concept calls for 1,171 single-family homes, villas, town homes and apartments, along with amenities including a clubhouse, fitness center, resort pool, parks and a 15-acre lake.

BBX has entered into a joint venture agreement with CC Devco Home, a company led by Armando Codina and Jim Carr, to develop approximately 394 homes in part of the Bonterra community.

Wise said BBX is planning 300 apartments with another developer.

In October 2013, BBX entered into a joint venture with JRG USA, which assigned a contract to purchase 4.5 acres near the Intracoastal Waterway in the historic Northwood Village area in West Palm Beach. The joint venture is seeking to expand land entitlements and increase height restrictions from four stories to 15. Wise said there is nothing to block the view of the Intracoastal Waterway, which offers a wide vista of the Breakers and town of Palm Beach.  BBX also owns an adjacent 2.7-acre parcel.

Billionaire Jeff Greene has the parcel in between the two BBX parcels and has about four others in the area, Wise said. “You have real players here who are serious about making something happen. It’s a place where people want to live – it has a real vibe and character to it.”

Gardens on Millenia consists of 37 acres near I-4 and the Mall at Millenia in Orlando.  Plans include a 300,000-square-foot shopping center and 280 rental units. BBX is filling about 10 acres of a lake to help enhance the value of the site. BBX was in discussion with a potential joint venture partner on developing the apartments.

BBX has is renovating and releasing these student housing properties in Tallahassee to increase the value.