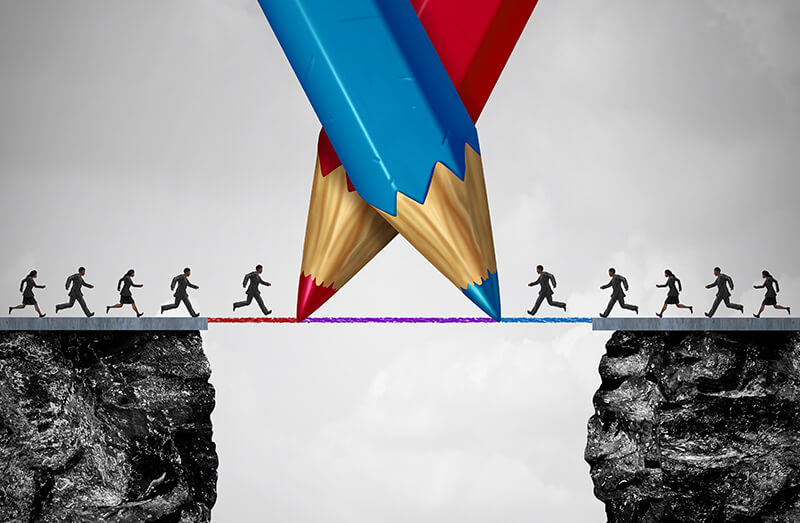 Bridging the gap between training and job openings

Employers say too many high-tech jobs are unfilled because students are not being taught the necessary skills to meet today’s workplace demands. The promising news is many businesses and education systems have combined forces to close the gap between what and how students are taught to qualify them to meet what companies are seeking.

This is part two of SFBW’s continuing series on education/business collaboration. >

Job training can make a world of difference

In years past, those with autism or intellectual disabilities rarely were asked what kind of work they did. Jewish Association Residential Care Florida is taking the steps to change that.

“For so many years, they’ve never been asked that,” says Nancy Freiwald, JARC Florida’s director of program services. She’s referring to clients of the organization’s Community Works Program, who’ve been successfully trained for employment in the community.

The goal of the Community Works Program is to provide opportunities for employment training in the real world, Freiwald says. The program was launched in 2014. Trainees were unpaid until July 2016 when a state grant allowed participants to be paid. So far, 14 individuals have become paid employees with the organization’s partners in the business community. More than 60 individuals are now being trained.

Participants are taught culinary, janitorial and manufacturing skills, and they’ve been well-received in the business community. “A lot of employers say they love the program,” Freiwald says. “When other employees see how hard our guys are working, they step up their own game.”

Freiwald says one of JARC Florida’s clients was doing such a great job working at a local country club salad bar, she was given a job with even more challenging tasks. Then she in turn went on to train someone else from the program. “One of our trainees became the trainer.”

Don’t enjoy working for someone else? Consider a franchise business

John Hayes literally wrote the book on franchising, and he is the Titus Chair for Franchise Lecturing at Palm Beach Atlantic University.

The noted author and lecturer says Gallup polling continues to show the majority of Americans do not like their jobs. The findings are quite different when franchise owners are polled instead. “Their job satisfaction is much higher,” Hayes says.

There are many advantages to buying a franchise as opposed to starting one’s own business from scratch. “Buying a franchise is safer,” he says. “At least one-half of startup businesses will fail within the first year.”

The Titus Franchising Center was just founded last year, and Hayes says more students are becoming interested. He says the majority of students are interested in franchises within the food and beverage arena. “People know people will have to eat. There’s perceived safety in that,” he says. “A lot of franchised businesses hold up during recessions.”

Miami-Dade College is ready to battle

At the Cybersecurity Center of the Americas at Miami-Dade College, they’re training to fight a real war—a high-tech war, that is. The new facility, which officially launched last month, has the latest technology to teach students and community members to recognize and fight back against a cyberattack.

“It’s like a bunker,” says Antonio Delgado, dean of engineering, technology and design at the college, adding students practice and learn using real-world scenarios, not theoretical concepts found in a textbook. The facility is referred to as a “cyber range,” a cybersecurity term for a completely contained environment where one can practice against real attacks without affecting the outside.

“We are providing our students with hands-on skills,” Delgado says. “It’s so high-end we are pushing for more professionals to come and upgrade their skills.”

Delgado sees the threat of cyberattacks continuing to grow. “Hackers are more advanced than the good people,” he says. “Every week you see a new company has been attacked, or the government has been attacked.”

The college has partnered with Cyberbit, a high-tech Israeli company specializing in cyberthreats. Delgado says companies are slow to respond in the event of an attack. However, with the technology available at the center, people can learn to realize when an attack is underway and what to do.

Celebrity Cruises was having trouble finding people with the necessary skills to fill 12 key positions. That’s what prompted the Council for Educational Change to get involved, says Elaine Liftin, the council’s president and executive director.

The Council for Educational Change is a not-for-profit organization that advances school success by forming partnerships between principals—and other school leaders—and CEOs. “Business executives have skills that principals may not,” Liftin says.

Business leaders then mentor and coach principals to develop a strategy that allows students to graduate career-ready. “That’s our niche,” Liftin says. “Connecting schools with businesses.”

Meetings are held between business leaders, students, parents and school faculty. The council focuses on improving a school’s academic performance in addition to readying students for the business world. Not all jobs require a college degree; therefore, students can be introduced to technical jobs as well.

In the case of Celebrity Cruises, “the CEO said the company lacked a pipeline of good leaders,” Liftin says. The council then arranged a series of meetings with the company. “We put together a career leadership forum,” she says. “We worked with them and their jobs to construct an action plan.”

FAU’s Tech Runway can be considered a one-stop training tool for entrepreneurs with a vision. It’s a public-private partnership designed to accelerate technology development as well as incubate startup companies.

“It’s one of the best mentoring programs on the planet,” says Rhys Williams, associate vice president for research and managing director of the FAU Tech Runway. He says program participants enjoy a shared workspace for honing their skills.

Williams says the program provides future business owners with many of the tools they need to make a successful jump into the business world. The Runway, housed in a 28,000-square-foot collaborative workspace, offers mentoring and networking opportunities as well as expert assistance on raising capital. “They can see how to finance their business,” says Williams.

Since its founding in 2014, the FAU Tech Runway has launched and served 52 startup companies, which have collectively raised more than $46 million in capital, creating nearly 300 jobs and generated more than $23 million in sales revenue. Williams says many events are held at the facility. “It’s a free flow of ideas. We want our people bumping into other entrepreneurs at the water fountain.”

Every year brings a new class of 21 participants, he says. “The top seven are FAU students selected to the program,” he says. “Seven are selected from the faculty, and seven from the community with no connection to FAU.”

Russell McCaffery, dean of Broward College’s transportation programs, says the most popular area of study is the aircraft maintenance program. “There are jobs plentiful, and they pay well,” he says. “It’s an easy program to complete. It’s quick at a fairly low cost.”

McCaffery says learning to become a pilot is rather expensive. “A lot of kids want to be pilots when they grow up,” he says, “but the cost is prohibitive.”

The institute is in a partnership with Phoenix East Aviation to train its aspiring pilots. “They’re a large flight-training provider out of Daytona,” McCaffery says. “They’re well-respected and have better expertise and the ability to procure aircrafts. It makes more sense for us to focus on our core strength in academics. Phoenix hires all the flight instructors.”

Mary Kay Copeland, director of Enterprise Systems Education and a professor of accounting at Palm Beach Atlantic, found many managerial consultant positions were going unfilled because most students were not being trained in enterprise resource planning.

She’s quite pleased with the program’s success rate. “Our students are doing very well and getting really good jobs,” she says. “We’re getting great feedback from employers because our program is directly involved with what students need when they graduate.”

The program also offers a comprehensive boot camp in the spring. “It gives them exposure to the system to see if this is something they’d like to pursue,” Copeland says. ♦

Christopher Malter, co-founder of The South Florida Accelerator, looked at the local job market and recognized a huge problem: Most of the area’s potential employers were high-tech firms seeking new hires to be computer and high-tech savvy. Unfortunately, most applicants were lacking in these skills.

“We created Code Skools, a not-for-profit program working hand in hand with high schools,” Malter says. “We teach high school kids, 11th- and 12th-graders, coding languages, including CSS, JavaScript, Ruby and HTML,” he says. “High schoolers with this training can immediately get jobs, starting from $50,000 to $60,000, without a college degree. We are preparing Florida for the digital age. Retail, law, health care—everything is a tech company today.”

So far, the program is in Broward, Miami-Dade, and Indian River counties and soon will be established in Palm Beach and Lee counties as well.

At Code Skools’ first summer session last year in Broward County, they selected 20 students, all minority and 40 percent female. “At the end of the class, they were certified by Broward College,” Malter says. “Citrix and Synechron recruited them in their internship programs.”

Malter is quite pleased with the results. “Lower-income students can now use technology to succeed.”