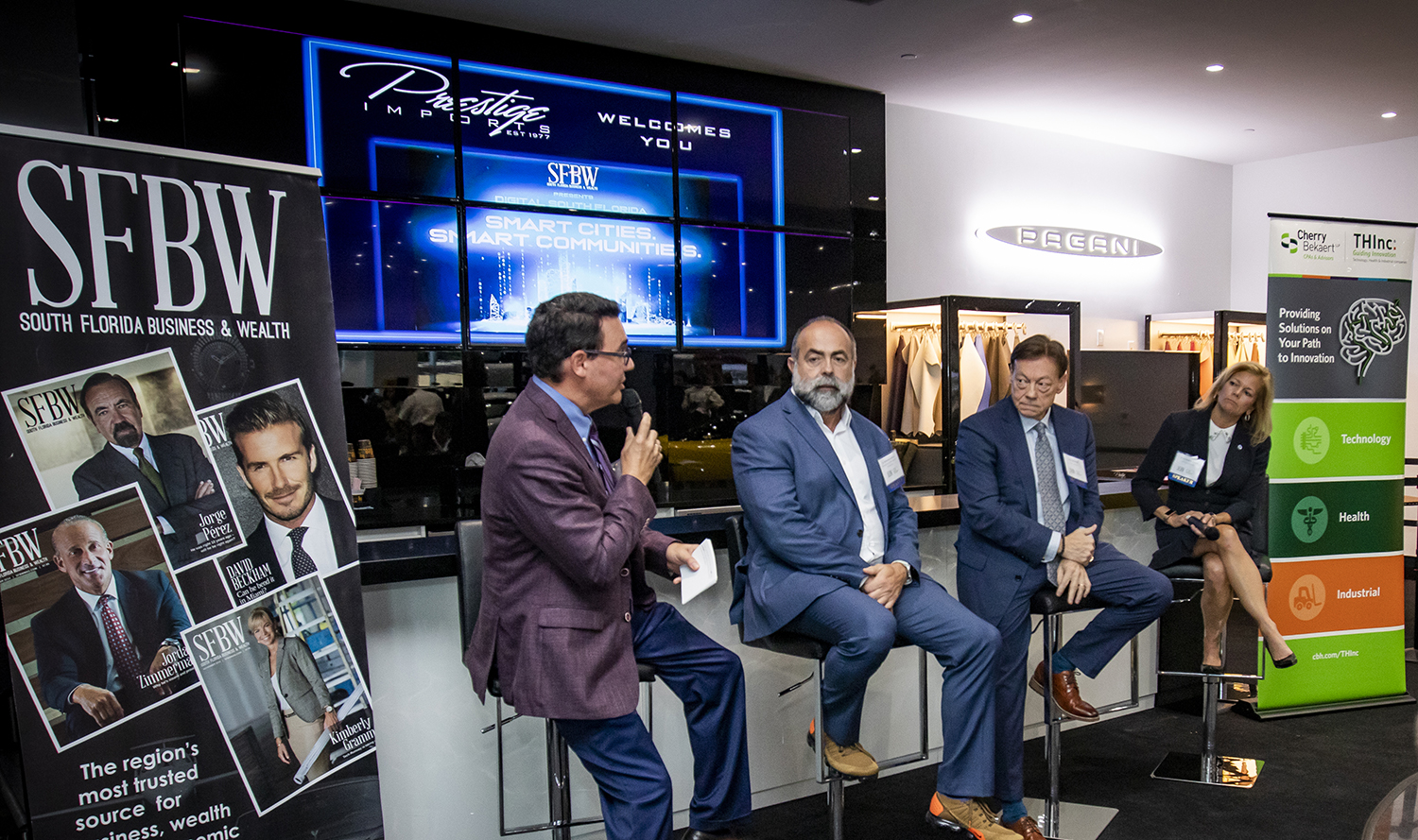 The September SFBW “Digital South Florida” series looked at “smart cities,” which use information and communication technologies to enhance the quality and performance of urban services, such as energy, transportation and utilities.

The concept will provide major business opportunities and spawn collaboration with universities and government entities.

Smart city technology spending reached $80 billion in 2016, and is expected to grow to $135 billion by 2021, according to a report from the International Data Corporation. The technology includes the internet of things, fiber optics, software, artificial intelligence, cloud computing and machine learning.

Barcelona, Spain, has implemented a network of fiber optics throughout the city, providing free high-speed Wi-Fi that supports the IoT. By integrating smart water, lighting and parking management, Barcelona saved the equivalent of $82 million of city funds and created 47,000 new jobs in the smart technology sector, Forbes reported. Boston and Baltimore have deployed smart trash cans that relay how full they are and determine the most-efficient pickup route for sanitation workers.

The moderator for the Digital South Florida panel was Rhys L. Williams, the associate vice president at Florida Atlantic University’s Division of Research and the managing director at FAU Tech Runway.

Rodolphe el-Khoury, dean of the University of Miami School of Architecture, told how his school is focused on IoT, microcontrollers and connectivity. El-Khoury is working on developing a smart city from the ground up in Mexico, which will allow for the design of the city to accommodate smart-city intelligence.

“It gets really interesting when we scale up and have buildings communicating to streets, highways and bridges. This is how we get to the smart city,” el-Khoury said.

Early smart-city technology was focused on energy efficiency and alternative sources of fuel in the early 2000s, and then it moved into urban efficiency and looked at the way people move through a city, he said. More recently, the focus has been on how to create live/work/place cities and connecting people via their neighbhorhoods.

In the era of smartphones, people expect to always be connected, Khoury said. “With that as a backdrop, the definition of a smart city is really in the eye of the beholder. It’s up to the city and that community to determine what it means to them to be smart, resilient, efficient and attract the right businesses for living, working and playing.”

El-Khoury said universities are a great place to study smart cities and come up with solutions since they present multidisciplinary problems that can span engineering, transportation, social science, architecture, policy experts, planners and environmental science. “System of systems” are used to make everything in a city hyperconnected.

Mary-Suzanne Powell, vice president for the vertical market and advanced solutions at Johnson Controls, said her 130-year-old company used to focus on HVAC, lighting, security, fire alarm systems and “make them really smart, so that they did their jobs really, really well.” Now, it’s taking all of the core businesses and figuring out ways to connect with customers in new and innovative ways. That involves deploying artificial intelligence and machine learning across all of the products to give customers essential data to make decisions to drive outcomes. The resulting efficiency can reduce costs and sometimes provide additional revenue streams.

“So, what we do for our customers is help them understand, determine what they want to do to be smart. How do they leverage the real estate that they have and make that real estate smart?” she said. The right devices have to be deployed in rooms and operating solutions allow for smart, unique experiences for the people who are within the building.

Ron Wainwright, a partner with Cherry Bekaert, said his practice area focuses on adding value for clients by providing guidance on where the future will be. He explained how state and federal governments have become involved in smart cities.

The energy policy act of 2004 provided a subsidy at the federal level to promote energy efficiency, which is important to cities. Subsequently, many states began programs.

“Where we add value to our clients is guiding them forward in the context of how does the federal government subsidize when you are creating, whether that’s technology or the next innovation in a smart TV,” he said. Given the complexity of tax codes, Cherry Bekaert has developed subject matter experts to provide advice on credits, rebates, exemptions and deductions.

One of Cherry Baekert’s clients is Cree, which is a world leader in LED technology, Wainwright said.

While the nation in general has problems with an aging energy grid, Florida recognized the issue early, he said. Florida Power & Light is a leader when it comes to energy efficiency.

Powell said some cities and counties are a bit further along than others in establishing an infrastructure upon which they can hang smart devices to interface with residents and businesses. Johnson Controls is in the design phase of working with the city of Miami Beach, which decided to use street lighting as the basis for smart city infrastructure. “You’ll start to see some really great things coming out of the city of Miami Beach,” she said.

El-Khoury said one of the misconceptions about smart cities is that they will come about with a lot of upfront investment in infrastructure, but a lot of the technology is already here. For example, in one project, a smartphone app is used to let waste haulers know when garbage containers are full.

Williams said he wants all the entrepreneurs in FAU’s Tech Runway program to understand that we don’t need to create the building blocks for smart cities because smartphones already exist. The challenge is networking all the pieces and figuring out business models.

Looking five or 10 years into the future, Wainwright says predictive analytics could pair with smart refrigerators to predict personal behavior similar to how a grocery store app can let you know what items are on sale.

“What we see happening right now, when we look at three to five years, is that the information is there, the data is there, but what is not there is the infrastructure attributable to tying the data together.

He suggests keeping an eye on taking data and predicting the future, which is symbolized by IBM’s Watson supercomputer. Also, look at how data can be further networked, such as tying the Nest smart home system to a smart TV and smart refrigerator or a Ring security system to Amazon’s Fire.

Powell said there’s worry about job displacement caused by technology, but the reality is that there is a need to upscale the skills of salespeople, engineers and employees in general.

El-Khoury said smart-cities technology will help with environmental changes, such as sea level rise and extreme weather, by providing more real time data with satellites and sensors on land and in the ocean. ♦

The Presenting Sponsor is Levatas, and our Gold Sponsors are FAU Tech Runway, FAU Division of Research, The Florida SBDC at FAU, Cherry Bekaert, CPAs & Advisors, Third Level, Chase and TechLauderdale. The evening begins with a cocktail reception for about 100 guests followed by the highlight of the event, a panel discussion with well-known C-level executives who provide insight into their personal lives, careers and views on issues affecting digital transformation in the business community.