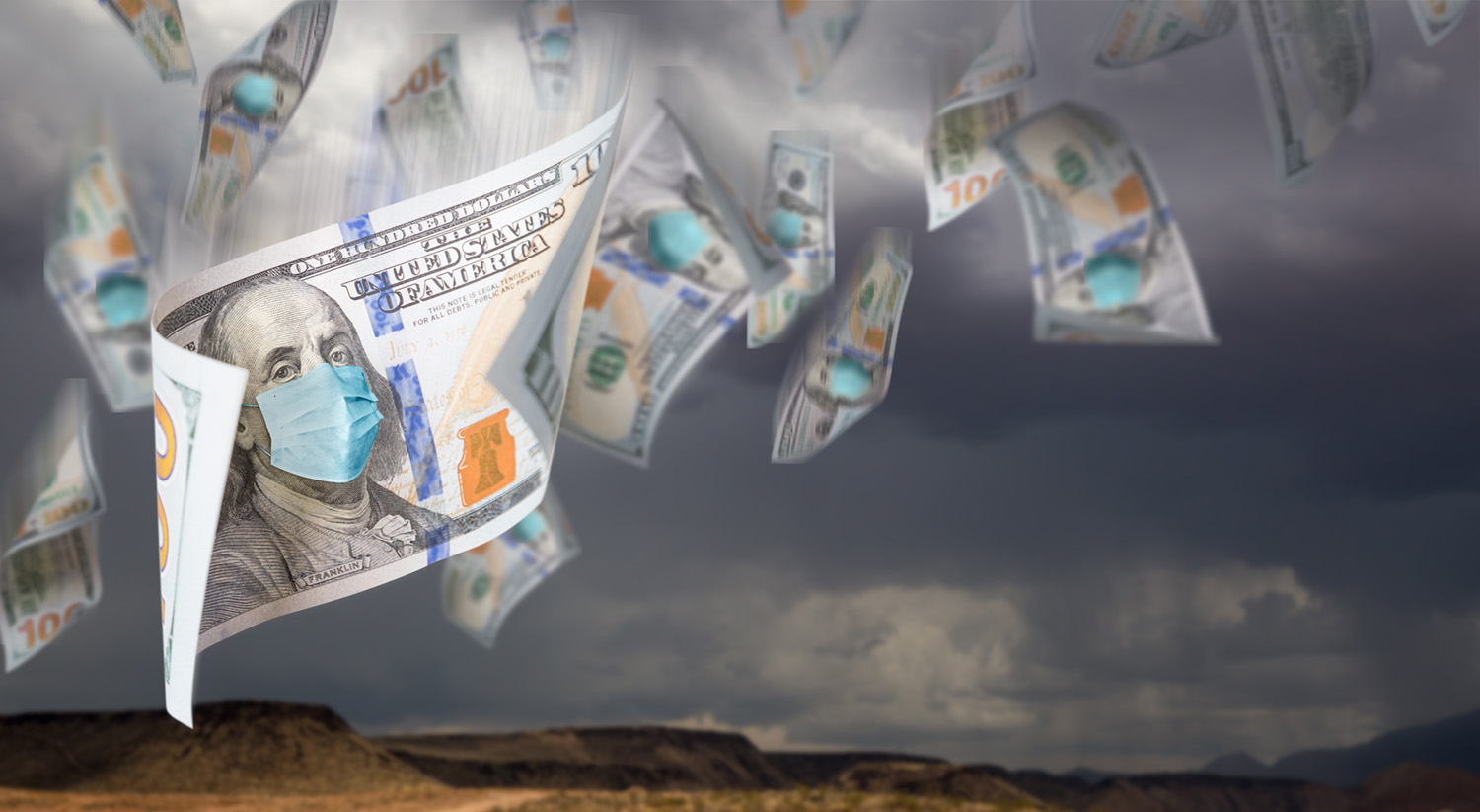 Dollars, Sense and the New Normal

Mason Williams, chief investment officer of Coral Gables Trust, weighs in on the impact reopening is having on the financial markets

Throughout the COVID-19 pandemic shutdown, South Florida Business & Wealth has continued to bring together C-suite executives and category leaders throughout the tri-county region for insightful conversations about issues pertinent to the local business scene.

Recently, the SFBW team hosted a digital discussion about the post-pandemic reopening and its impact on the financial markets with Mason Williams, managing director and chief investment officer of Coral Gables Trust—the largest independent and privately held trust company in South Florida, with more than $1.5 billion of assets under management. (cgtrust.com; with offices in Coral Gables, Fort Lauderdale, Boca Raton and West Palm Beach)

Here are some highlights from that conversation.

On the sectors/industries Williams is observing and how they’re doing:

“Initially, it was travel, leisure, hospitality, restaurants, cruise lines, airlines. They all dropped, big time, and for good reason. We were told to stay home; the world shut down. So, nobody was going to get on a plane. Or get on a cruise ship. Or go out to eat. So, really, everything fell.

“For a while, there was no place to hide. The areas that relatively held up better were large-cap tech, big-balance-sheet companies that don’t depend on the hospitality sector to make their numbers.

“And then the financial media started building this story and this dialogue around stay-at-home stocks, stay-at-home companies and industries. Just think of Amazon, Facebook, Etsy, Wayfair, names like that. They fell, but they really came back harder. Travel and leisure, anything cyclical, like banks, had a hard time. They’re still having a hard time. Energy sold off, and we saw negative oil trade for a while back there, for about a week or so, because things were so discombobulated. …

“Then you can get a little bit more granular; small cap and mid cap did not fare well at all because they’re more economically sensitive and more dependent on a stronger economy. … But a rising tide lifts all boats. From March 23 to [press time,] large-cap tech led us out of the hole we were in.”

On fixed income and bond performance:

“So bonds, again, funny enough, were not immune either back when the sell-off sort of had two legs from the February highs and into March 23; bonds were doing their job in the first part of that sell off, where they were offsetting the equity decline. Like they should do. And then it kicked into another gear.

“I want to say maybe March 10 through March 23, bonds sold off too. There was no place to hide. Even the highest quality bonds sold off and that was due to the liquidity. So, the market dried up. That’s when the Fed came in with both hands and came to the rescue and threw all this money at the system to get the engine going again. And that’s exactly what happened. Before they came in to help, spreads widened, which happens in fixed-income—people sold out because there was a desperation for cash. Anything to get me into cash, even if the best of the best is selling, I want out.

“The Fed came in and started a bunch of programs, bought bonds themselves, and have started to re-inflate the balance sheet of the Federal Reserve. And that started to grease the wheels again, where the credit markets started to behave more normal. There was a five- or eight-day window where if you are a bond buyer, typically in the municipal bond world or the tax-free bond world, you got some deals that you’ll probably never see again—just because there were no buyers and sellers. Spreads widened. And if you were on the buy side, you could pick away at some very good deals.

“So, there was an opportunity, even in the bond market, for people with the stomach to do it, to purchase some fixed income, and you didn’t even have to go out that long. You can get a five-year paper and get a heck of a deal and a heck of a yield. Just because the market delivered a gift as far as the liquidity. But it’s hard to do. When the markets [started behaving] rates dropped. So, the bad markets healed. But, now, if you’re a new investor trying to go in and get income, it’s even harder.”

On the corporate bond market:

“Since the Fed has come in, corporations have now been more willing to issue debt. And I think we’re somewhere between $800 billion [and] almost $1 trillion in corporate debt being announced or raised just in the last few months because of what the Fed has done. Taking the opportunity to lock in rates at lower prices, which you could argue, well, we’re already over-leveraged … hopefully, corporations are managing them correctly, but it’s an opportune time. If you want to raise capital, the markets are giving it to you.

“We would advocate for staying higher quality in the corporate bond market. Stay in the A-rated range, maybe upper-triple-Bs. But that’s it. Anything below that is subject to possible downgrades if your business doesn’t pan out and weakens.”

On his recent experiences with clients and the guidance he’s giving them:

“We try to do a lot of homework in the beginning of onboarding the client to feel out their situation. What’s the risk tolerance? What’s the income needs? What’s your time horizon for the money? Do you have any short-term goals you want to accomplish?

“Eventually, we try to put them into a portfolio that makes sense for all those answers. The market is going to sell off here and there; it’s the nature of the beast. It’s not out of the ordinary for a market to have a 10% correction twice a year. Of course, we got the extreme version of that times three.

“But if you’re in the right portfolio for the long term, you shouldn’t have that urge to jump ship. It’s dangerous if you do. It may feel good in the short term, just because things aren’t going your way. But if you abandon a perfectly good portfolio built for your long term and your financial plan, well, then you’ve got bigger challenges ahead trying to get back in and reconstruct that.

“If you look at history, some of the biggest days you can ever experience in a market are those first 10 or 20 days that you experience coming out of a major downturn. If you are present and invested in those 10 or 20 days, and then you go five years further, your annualized return is going to be far less than it would be if you just would have stayed still. So, we did some minor allocation changes based on the client’s comfort level of what was happening, but all in all, we tried to keep them steady and just reassure them.”

On new clients’ apprehension when it comes to committing to a long-term plan:

“To ease any apprehension for clients, what we’re doing is, if a portfolio is funded with all cash, and it’s an all-cash start, we’ll take three to five months to lag them into their longer term portfolio strategy. And the point about doing that is, in that window of time, you won’t get the high, you won’t get the low, but you’ll sort of get an average basis of that period of time and maybe you can get some really good opportunities on down days to add some money. And that makes people feel comfortable.

“Then they’re going to see it come together on their statements and they see their portfolios come together. We’re taking our time to do that, and it’s worked. Actually, some new clientele that we landed at the turn of the year were all cash beginnings. We walked into a great window of time to start doing that. On those down days that were down 1,000 points plus, we were very active and putting 10% to work or 15% to work to start building out a portfolio.

“You look at those purchase gains, you look at those cost bases of those equities that we bought back then, and you look at the gains that we’ve had in the last three months, it’s worked really well. So yes, we’ll continue to do that. Whether the environment’s stressed or not, that’s sort of an approach we always lead with.”

On what shape he sees the recovery taking:

“When you look at the stock market, I think you’ve got the V shape covered. Not to say that we [won’t] give a little back because the markets came so far so fast. But that’s definitely a V.

“As far as the economy, what would that look like if you had to put a letter on it? Well, we hope it’s not a W. I think we’ve kind of defined that first part of the W coming back up, but the whole part that could put us back down is a second wave of COVID-19 in the fall.

“The reopening is not going as well as we’d hoped. And those things converge in the fall as winter [draws close]. The jobs number [in June] was very strong, relatively speaking, versus what we were predicting. If we get a couple more months like that, to where maybe a trend is starting to define itself, then you can maybe look at a U starting to form—where the bottom of that U is not going sideways and it’s starting to maybe curve up a little bit. To get on the other side of that, it might take a couple years—maybe more.

“If we get a vaccine 12 months down the road, that’s a huge game-changer, and things could fire back on the economic Main Street front much faster and catch up with the markets. So, there’s a little bit of disagreement here with what Main Street sees versus what investors in the market are actually experiencing.” ♦

The managing director and chief investment officer of Coral Gables Trust has nearly two decades of experience building investment strategies and managing institutional multiasset class portfolios for high-net-worth private clients, families and foundations. Williams specializes in customizing portfolio solutions for high-net-worth individuals and families by using an open architecture framework. Having a career fully dedicated to fiduciary investment services, he has extensive knowledge and experience in trust administration, compliance and business development. Williams’ earned a master’s degree from the University of Miami and a bachelor’s degree from Arizona State University.