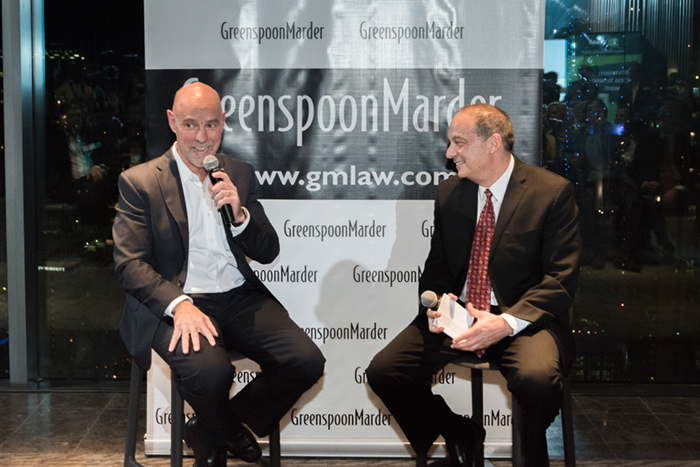 Robert E. Sanchez is chairman and CEO of Ryder System, a Fortune 500 fleet management, dedicated transportation and supply chain solutions company. He was named CEO in January 2013 and chairman in May 2013.

Over the course of two decades at Ryder, Sanchez has held many senior executive leadership positions including president, COO, CFO, CIO and president of fleet management solutions. Since 2012, he has led the development and execution of Ryder’s growth strategy, which focuses on businesses that do not yet outsource their fleet management and supply chain functions. Under his leadership, the company has achieved record revenue and earnings levels.

Sanchez is on the board of Texas Instruments, the Truck Renting and Leasing Association, the United Way of Miami-Dade, St. Thomas University, the Foundation for Human Rights in Cuba and the Association of Cuban American Engineers.

Sanchez was interviewed at East, Miami, the new hotel at Brickell City Centre, by SFBW Chairman and CEO Gary Press. The following transcript has been edited for brevity and clarity.

What was your early life like, and how did you end up getting a degree from the prestigious Wharton School?

I’m very fortunate that I grew up in Miami. I’m not only the CEO for Ryder, but CEO of a Fortune 500 company in my hometown. My parents are Cuban exiles and I grew up in Westchester. My parents were middle-class and taught me about the value of hard work.

I started a small computer consulting company—building computers and reselling them. I realized pretty quickly that I didn’t know anything about business. It’s a company I had started with three other people who had studied at UM.

I went to Wharton and I wanted to be a consultant. I got a job offer in Chicago with a consulting firm. My wife had moved up to Philadelphia and had grown up in Fort Lauderdale. She spent a year in Center City, Philadelphia. She was not happy about that. When I told her I got this wonderful job in Chicago, she said, “You are not going to Chicago. I’m not going to Chicago. We are going back to Miami.”

The only company hiring in Miami was Ryder. I thought, “Yellow trucks? Are you kidding me? That’s not what I want to do.” But, from day one, I loved it. We do business with 50,000 companies from GM to CVS to the local bakery down the street. You get to learn how so many companies do business.

You have the role of both CEO and chairman, which some companies split these days. What are the pros and cons of combining the roles vs. splitting them?

I think it can work either way. At Ryder, I’m chairman and CEO because that’s how we’ve always done it. We have an outside director that’s a lead director. If I do a bad job as CEO, I will get fired equally whether I’m chairman or CEO.

Are we going to have driverless technology in commercial trucking at some point, and when might that be? Are there specific innovative initiatives that Ryder is exploring in this space?

There have been a lot of changes in the past 10 years due to regulations. In the next 10 years, there will be even more change because of what you mentioned. Autonomous trucks, Uberization, electric trucks and new technology—these things are all going to happen.

I’m not sure how many people saw a video of the Otto system that drove a beer truck 120 miles. The driver was in the back seat. The company doing that is making incredible progess on this driverless technology and they are now owned by Uber.

There is no doubt in my mind this will be technology we will be using in the next five or 10 years. The issue will be liability, such as if the truck gets in an accident and there’s a software glitch. You are still going to have to have someone sitting there baby-sitting things. It’s an incredible change. The number of hours that a driver can drive a truck is limited. I think that will change.

Ryder has a focus on hiring veterans. Why are veterans important to Ryder, and what are some of the things that Ryder is doing to attract and retain veterans employees?

We have placed a big emphasis on hiring veterans. We are a main sponsor of Hiring Our Heroes, a U.S. Chamber of Commerce Foundation program. We are just at about 4,500 veterans since November 2011. It’s been great. It’s not only the right thing to do, but it is great business. You get people that know how to follow up on commitments and get things done with a high level of integrity.

If you are a veteran, we will match you up with a veteran buddy to help acclimate you to our culture. We link job codes on the website to job codes in the military. We are training current military personnel at bases on Ryder jobs 90 days out.

As a public company chairman and CEO, how do you balance the short-term expectations of Wall Street vs. the long-term need to invest in the future?

I would say long-term is important as long as I hit my short-term numbers. It’s a tough balance because you always have to do the right thing for the company, but in the long term it puts tremendous pressure on CEOs to make numbers. If you make your numbers, nothing else matters. If you don’t make your numbers, nothing else matters. I take making numbers very seriously. We try to give guidance that we think we can achieve. For the longer term, we say here’s what we are trying to achieve.

What are some of Ryder’s most successful innovations?

The things we do, whether maintaining trucks or running truck fleets, stem from how it started to get more difficult because of regulations—everyone wants cleaner air and safer roads. Air coming out of a tractor trailer is cleaner than the air coming in. The amount of after-treatment that they do to these vehicles is incredible. That’s very good, but expensive and complex. You have to be like a rocket scientist to maintain a diesel truck today. A lot of companies trying to do it on their own came knocking on the door of Ryder. We have 7,000 truck drivers and 6,000 diesel mechanics, and expertise in what’s difficult.

The other thing is changing the culture at Ryder to be a growth company.

It’s been a long time since we had 3 percent GDP growth. There is no substitute for GDP growth. When GDP is growing, a lot of stuff gets moved around. We have lived in 1 to 2 percent GDP growth the last nine or 10 years. Having lived through 2008, we are all kind of babies of depression. You always worry about waking up and it will be a distaster.

What’s the value proposition for using Ryder for outsourcing?

They have to save money or they don’t want to do it. They save 10 to 15 percent typically. We keep trucks up and running better than they can. We can run deliveries and the supply chain better.

Our biggest dedicated customer is CVS. We deliver to about 70 percent of stores. It’s a Ryder truck and a Ryder driver. We do a lot of logistics for automotive companies, such as parts for GM and Toyota. We provide trucks to almost any business you can imagine.

We do business with the company doing almost all the buns for McDonalds. They need trucks to move the buns. We make sure those trucks are up and running. If they are ever down, there will be another Ryder person there within two hours.

In the wake of the election, where do you see growth over the next several years?

I think it’s hard to believe the U.S. economy cannot grow faster than 2 percent a year. This is the best country to do business in by far. It really is.

We need business to feel like government is on your side. I don’t know if it will be different in a Trump administration, but I hope it is. We talk to a lot of small businesses. They have to think, “Do we sign a six-year lease on new trucks? Do we build a new warehouse to distribute?” Whenever there is uncertainty, they say, “We’ll wait.” There is the potential to unleash a tremendous amount of power in the economy.

What do you do in your spare time?

I have three sons. Two are in college and one is a senior in high school. I have spent the last 20 years going to baseball games. I got into playing golf a little bit. I’m trying to get better. I love to go fishing. I’m blessed. I still see friends every week that I went to kindergarten and high school with.

In terms of acquisitions are you looking for a specific geography?

Our growth has been organic, which is the best kind of growth. We do rollups in trucking and leasing. Gator Leasing was a company in Miami we bought seven or eight years ago. There are little Gator Leasing companies all over the country. Those are great acquisitions.

We are looking for capabilities in logistics we don’t have. We are in auto and high-tech. We weren’t in food. We bought a company six years ago called Total Logistic Control and do business with Kellogg’s and ConAgra. We touch every part that goes on a Toyota truck. We touch every Gatorade east of the Mississippi. We touch most of the fries McDonald’s uses in the Midwest.

One industry we are looking for is health care. We would love to be in health care logistics.

How do you drive innovation?

You have to start with small steps. You’ve got to get people to do little simple things you are going to do differently. The first product we rolled out was on-demand maintenance. It took two years to get it off the ground. It wasn’t like we were splitting the atom. Getting culture change was tough. You take small steps and try to get bigger things. ♦