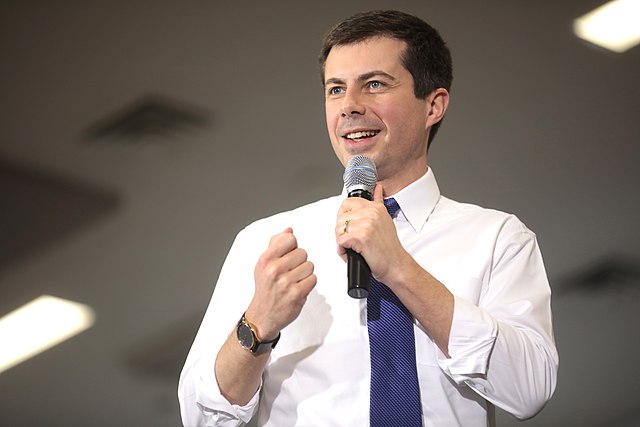 “Travel, in my mind, is synonymous with growth, with adventure, even love—so much so that I proposed to my husband Chasten in an airport terminal,” said the former mayor of South Bend on Wednesday as he accepted his nomination to become President-elect Joe Biden’s Secretary of Transportation. “Don’t let anybody tell you that O’Hare isn’t romantic.”

Mayor Pete is so mild-mannered, and the LGBT community has made such strides in society, that it is easy to forget how absolutely stunning both his nomination and his candor is. The first openly gay person to win a presidential primary contest—2020’s Iowa caucus—will likely also become the first person from the LGBT community to join the cabinet of a presidential administration.

The sense of moment was not lost on Mayor Pete, who, in his remarks, seamlessly moved from the personal and the intimate to the societal and historical. “The eyes of history are on this appointment,” he said, and recalled the tough time President Bill Clinton had pushing through his ambassador to Luxembourg nominee in the 1990s. It took Clinton five years to get James Hormel, who is gay, his ambassadorship, first nominating him for the same role in 1994 for Fiji (a move rejected by the antigay Fijian government), then facing fierce opposition from leaders in the Senate—opposition based solely on Hormel’s sexuality.

Hormel, a vegetarian who happened to be an heir to the Hormel meat packing fortune, finally won the position in 1999 through a recess appointment. “I watched that story and I learned something about some of the limits that exist in this country when it comes to who is allowed to belong,” Buttigieg said of his then-17-year-old self. Buttigieg doesn’t use the word “belong” lightly; as he’s said many times, it’s the key to his political and personal philosophy. “But just as important,” he continued, “I saw how those limits could be challenged. So two decades later, I can’t help but think of a 17-year-old somewhere who might be watching us right now, somebody who wonders whether and where they belong in the world, or even in their own family, and I’m thinking about the message that today’s announcement is sending to them.”

Buttigieg has often remarked that when he was young, he never could have imagined a career in politics because he was gay (just as he never could have imagined getting married to another man). But come January, this eloquent graduate of Harvard and Oxford, this former U.S. Navy Intelligence Officer who will have just turned 39, will find himself within the highest circle of power, with a major department to run—a department that knits together everyone in the country, regardless of geography or party or race or age. It couldn’t be a more fitting role for the man from South Bend.