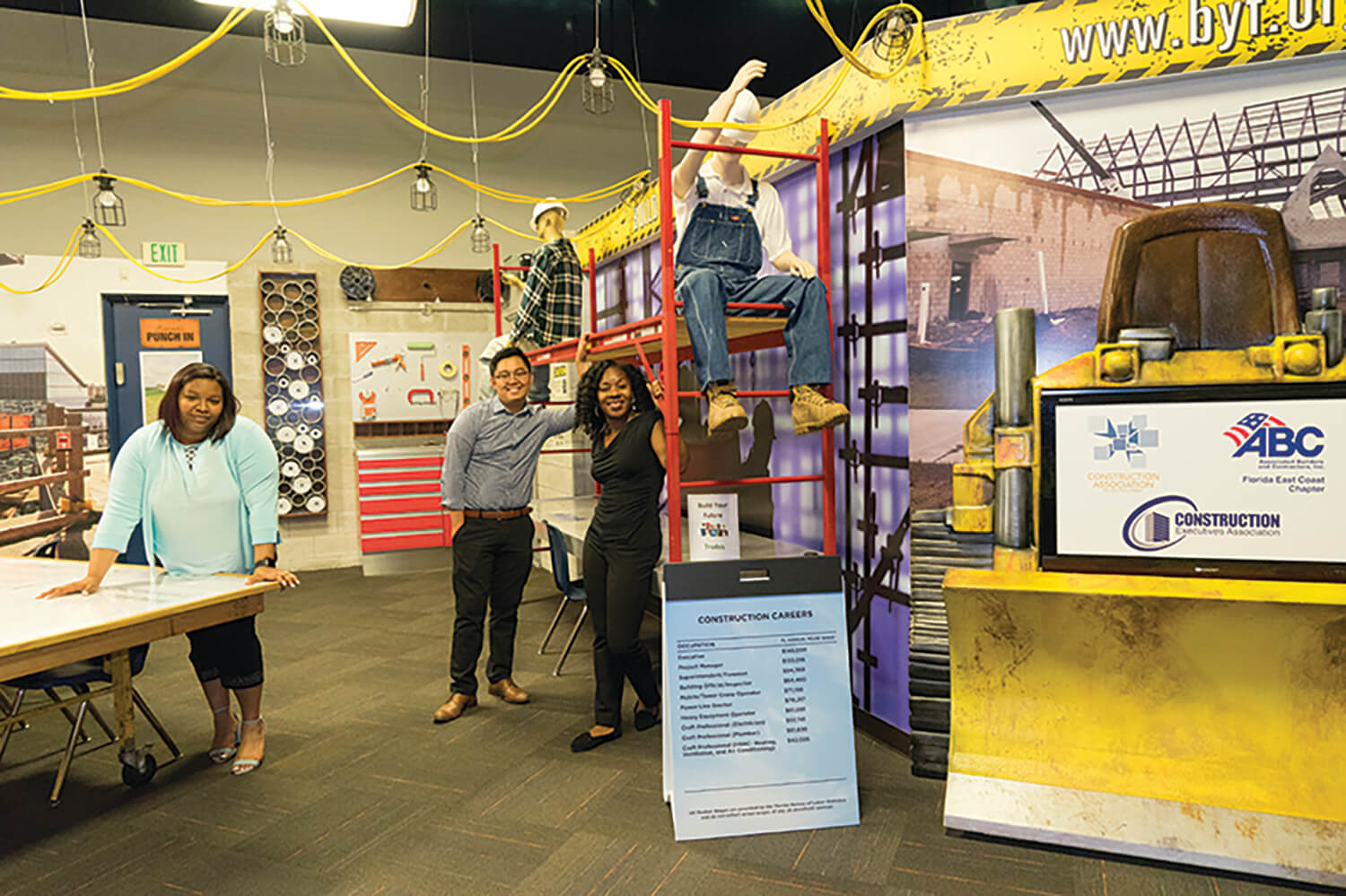 How Junior Achievement of South Florida empowers the future’s workforce

Eight years ago, student Stefano Selorio began his professional journey, thanks to Junior Achievement of South Florida. It started when he was in the fifth grade and participated in JA BizTown program, which teaches youths how to run companies through hands-on role playing and handle their personal finances. BizTown resembles an indoor business hub with real companies, including BB&T, Lifestyle Media Group and Hoffman’s Chocolates.

“We owned little storefronts, and I was the CEO of Sports World,” Selorio says. “I was in charge of making paychecks, depositing them and hiring people.”

In the eighth grade, he participated in JA’s Finance Park program. He took on the character of a single father with three children, and he learned how to manage a household budget. JA has a partnership with Broward County Public Schools that requires fifth and eighth graders to attend these programs.

In 11th and 12th grades, he did the JA Fellows program twice and learned how to create, build and develop a small company along with a team of roughly 15 to 20 students. The 8-month program is led by business mentors and culminates with a “Spark Tank,” where students present business pitches to investors. “We had advisers from JA, entrepreneurs and CEOs who came out and helped us with how to take products to market,” he says.

Today, at 18, Selorio is a polished and engaging marketing specialist at JA, a paid part-time role that was created for him. He studies marketing at Florida International University and says that his JA Fellows experience paved the way for his chosen major. He was the vice president of marketing at one of his old student companies.

“I feel like I’m a testament of the people who funded and provided me this opportunity,” he says. “That’s why the drive from Miami to Coconut Creek is so worth it. Every time I drive into the parking lot, I’m excited because I have a JA staff necklace. I love every minute of it. People don’t just get these opportunities—to be given a marketing position and to know the CEO.”

Wilnifred Thompson just finished JA’s eight-month Career Bound program, which meets once a month. Graduating from high school in June, she’s looking for a summer internship and says the program has prepared her with business-plan creation abilities, interviewing techniques, résumé and cover letter tips, and most important, the soft skills of business.

“The biggest thing, I would say, is learning about soft skills, like how to shake hands,” she says, “because it’s not only for the business world. It helps you in life—learning how to communicate with people, collaborate with people.”

Aquilla Sample-Williams completed the Career Bound and JA Fellows programs. “I did job shadowing at the Margaritaville Hollywood Beach Resort,” Sample-Williams says. “I learned about life skills and realized that I don’t want to have my own business.”

Now a Broward College student, she works at the Ocean Grande Beach Club and Resort in Hollywood.

Laurie Sallarulo, JA South Florida’s president and CEO, explains what some of the goals are for JA’s pathway from education to employment.

“Stefano, he was kind of our test. The Community Foundation of Broward gave us a grant, and we took our Career Bound program from 2017 and piloted it with 14 high school students from around Broward. A year later, now we have 44,” Sallarulo says. “The idea of the program, first of all, is to expose them to different career opportunities across the industries. That’s one goal. Goal two, give them an opportunity to learn and practice soft skills, which we also call ‘critical skills.’ And the third was the internship/job-shadowing opportunities. So those were the three goals with the program we started last year.”

The last part about the program involves personality testing and skill and interest assessments, she says, so students can determine which careers they are best suited for and are later matched up with companies.

Into the Real World

“We had AutoNation Day,” she says. “We went to the Mercedes-Benz dealership. The students got to speak to the general manager, people in the finance department, the technician. We started there and listened to presentations, and from there we went to the company’s headquarters where the CEO, Mike Jackson, spoke.”

Not only that, the daylong tour exposes kids to jobs that they wouldn’t have thought of, says Marc Cannon, senior vice president of corporate communications.

“A lot of young folks don’t realize that you can sell and service vehicles and make a nice living and career at it,” Cannon says. “JA also enlightens people about the opportunities that they are unfamiliar with across industries. In automotive, you have different departments—not just sales and mechanics.”

On the employer side, Cannon offers tips on what to look for when hiring an intern. AutoNation has a six- to eight-week internship program. “Look for someone who wants to learn and has boundless energy,” Cannon says. “Think about it: The world isn’t always made up of ‘A’ students, but somebody who wants to learn can go a long way in any business. You can tell in the first week. Who showed up early? Who stayed late? And who is asking the right questions?”

Violet Lowrey, the director of student services at Keiser University’s Fort Lauderdale campus, agrees. She went through a JA program when she was 10. Now, she is a mentor volunteer and a past board member. “They taught me about community and what a community is and how it works,” she says. “That’s what struck me.”

With the advancement of technology, and millennials growing up as digital natives, soft skills—critical thinking, making eye contact, showing up on time—have fallen by the wayside, Lowrey says.

But JA fills that critical gap, says Linda Carter, CEO and president of the Community Foundation of Broward. She chaired the committee on employment/skills gap with James Donnelly and funded Junior Achievement to hire youth employment manager Debbie Elliot.

“It’s all these personal skills,” Carter says. “Do they have the interpersonal skills to work with the team? The younger generation is wonderful on the computer, but where do they acquire those people skills? That’s where JA, internships and youth employment have that amazing ability to be transformative to them. And what a great way to develop future employees. It’s a win-win.”

“The idea with JA is to be a solution. It’s about preparing students to be the most-responsible consumers, the most-productive employees and business owners that will create jobs to better our economy,” Sallarulo says. “There’s hope. We are giving them something to strive for and to know that they can be anything they want to be really.” ♦

• JA is funded by numerous donors, some of which include: