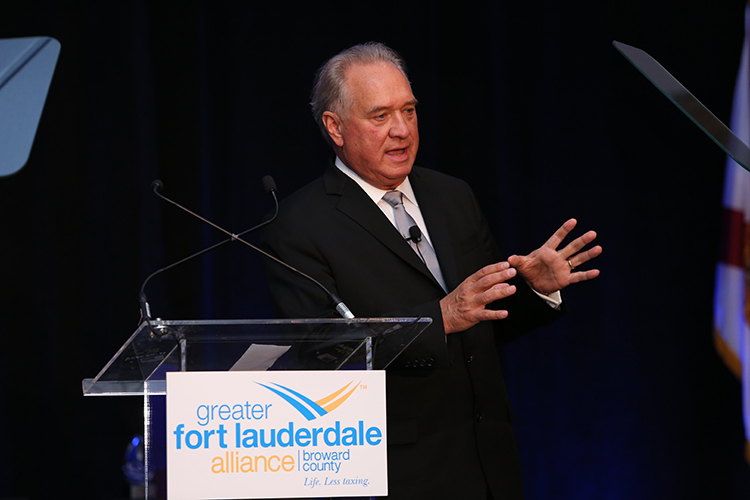 Entrepreneurs, they just don’t get no respect

“It’s too bad we don’t appreciate entrepreneurs as much as we appreciate sports,” says Jim Clifton, the President and CEO of Gallup.

The nation’s motto could be “no running back left behind,” Clifton joked during the Greater Fort Lauderdale Alliance Annual meeting at the Signature Grand.

Clifton, who is the author of “The Coming Job Wars” and “Entrepreneurial StrengthsFinder,” talked about how entrepreneurs often overcome skeptical rejection of their ideas.

Ted Turner had what many thought was a ridiculous idea for a 24/7 news channel on CNN, said Clifton, who has done consulting work for CNN.

Raising buffalo? That may have been the worst idea of all, said Clifton. Of course, Turner now has a 55,000 head herd that supplies his 44 Ted’s Montana Grills.

He also got a laugh from the audience when he joked, “What if someone would have given Wayne Huizenga a good idea?”

Clifton estimated that there are 500 kids in Broward County who could build a business without limits, so it’s a matter of finding a way to encourage them.

The Alliance meeting was upbeat with a report that said the public/private partnership for economic development had attracted 21 new company relocations and expansions during its 2013-14 fiscal year. This means more than 1,400 new value-added jobs, more than 5,000 retained jobs and more than $267 million in new capital investment.

SeaLand, a worldwide shipping company headquartered in Denmark, which has a 13,000-square-foot corporate headquarters for the Americas in Miramar with 65 new jobs at more than 200 percent of the county average wage.

Valley Forge Fabrics, a manufacturer and distributor of high end fabrics and textiles, is retaining 120 Pompano Beach employees and expanding to a newly remodeled 75,000-square-foot facility in Fort Lauderdale where it will create 40 new full-time jobs and invest $2.9 million.