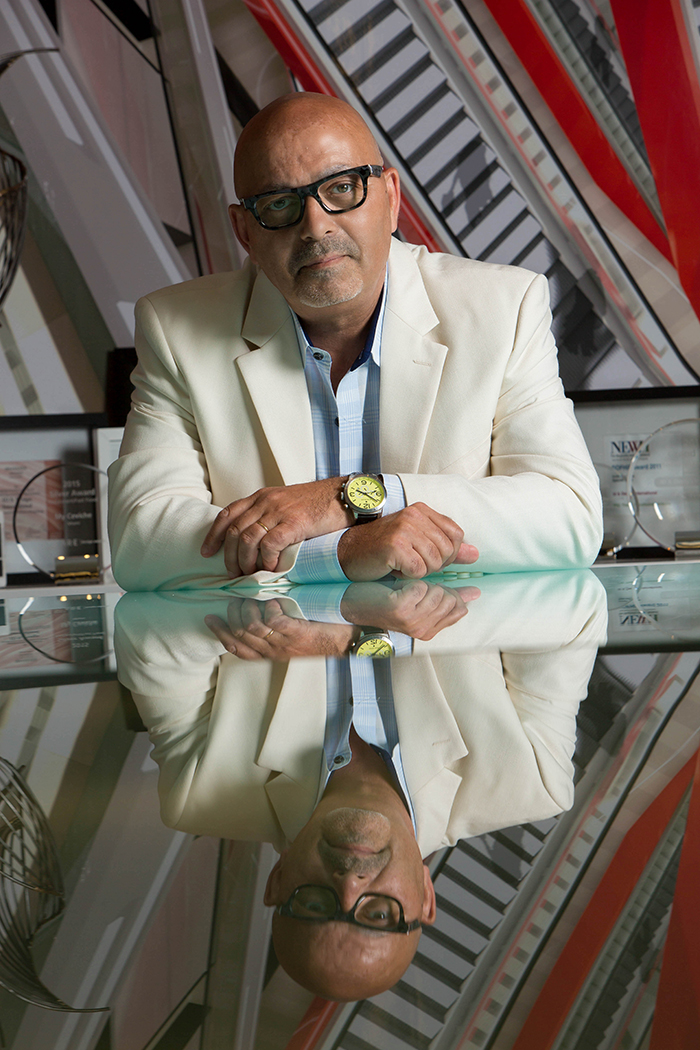 You might not know ID & Design International by name, but it would be hard to avoid the experiences it creates.

IDDI has helped create the branding and interior design experience for major retailers and hospitality venues such as Macy’s, Starbucks, LMVH, Whole Foods, iPic Theaters and Royal Caribbean’s Oasis of the Seas. It has also helped create the buyer experience for a who’s who of South Florida developers. And, it recently assisted with the repositioning of the Arvida Park of Commerce, which will add multifamily residences as it turns into the Park at Broken Sound.

So what exactly is IDDI? President Sherif Ayad says IDDI is what you would get if you took a marketing, branding and advertising firm and mixed it together with an interior design firm.

Ayad was previously a principal with Pavlik Design Team in Fort Lauderdale and Walker Group/CNI in Los Angeles. The inspiration for his creativity is apparent in his office, which is filled with beautiful artwork created by his father, who also designed stage sets.

Ayad grew up in Montreal and graduated from Dawson College with a bachelor’s in interior design. He opened Sherif Design Associates in Montreal in 1981, about 18 months after graduating, and focused on restaurants, nightclubs and retail.

“I ran a studio that became very hot and very vibrant. We did a lot of prestigious projects, but I was just a kid,” he says. “I knew nothing about being in business, but always thought about business. I think that is the root of our philosophy even today. We are built on the premise that we design businesses, not spaces. We design businesses for the owners and for the investors. We design experiences for end users. That’s what I love about commercial design.”

After 10 years of operating his firm, Ayad was dismayed to see the economy in Montreal deteriorating, partly because of the French-speaking separatist movement in Quebec and that his clients were mostly English speakers. He closed shop and became creative director in the Los Angeles office of Walker Group, which led to becoming the point person on design for projects in Singapore, Indonesia and other Asian nations.

One of Walker’s competitors was Pavlik Design Team in Fort Lauderdale. Owner Ron Pavlik tried to recruit Ayad and finally told him, “You don’t have to come work for me, but I’m going to send a ticket for you to visit me,” Ayad recalls.

Ayad says he liked the entrepreneurial nature of the company, which contrasted with the fact that Walker was owned by WPP, one of the world’s largest advertising and marketing companies.

He became creative director at Pavlik and was there for 10 years before he decided to start his own company in 2006 when Pavlik retired. He had a two-year noncompete agreement regarding Pavlik’s clients and opened shop just in time for the recession.

Ayad initially focused on the international market, finding success in South Korea, China and South America. As the U.S. economy rebounded, he picked up more and more clients here.

IDDI developed the tagline of “Let’s brandstorm,” a concept that involves becoming partners with clients to develop a shared vision for the customer environment, ranging from the handle on the door to lighting and the flow of the business layout.

“Environments are the most tangible assets in the branding world,” Ayad says, even more so as bricks-and-mortar retailers face competition in the digital age. “I’m of the opinion that there will always be a need for tangible retail environments. I don’t think that’s optimistic; I think it is human nature to crave those experiences. Retail environments have to think of themselves differently. They have to create more powerful experiences and make it worthwhile.”

Ayad has extended that approach to multifamily developments, working on public amenities such as spas, game rooms, clubhouses and pool decks. “Leasing isn’t done in the leasing office. It’s done by the swimming pool,” he says.

IDDI is also working with the Falcone Group on Miami Worldcenter and its Paramount condominium projects. Altman Companies and The Related Group are other major clients. Additionally, the firm is working on Fort Lauderdale’s Bahia Mar, where two 40-story luxury condominium towers are going to be built along with facilities for the Fort Lauderdale International Boat Show. Several major hotel chains are also clients.

The majority of IDDI’s 70-member staff once worked for Pavlik, Ayad says. It also includes his sisters, Olfat, who is creative director, and Mervet, who is a senior designer. Olfat was also a partner in his Montreal business.

IDDI is housed in a 13,000-square-foot former bank building on Dixie Highway, just north of Commercial Boulevard, that it acquired 1.5 years ago. Forget about the notion of the shoemaker’s kids, though. It’s every bit as stylish as one would expect for a company like IDDI. ?