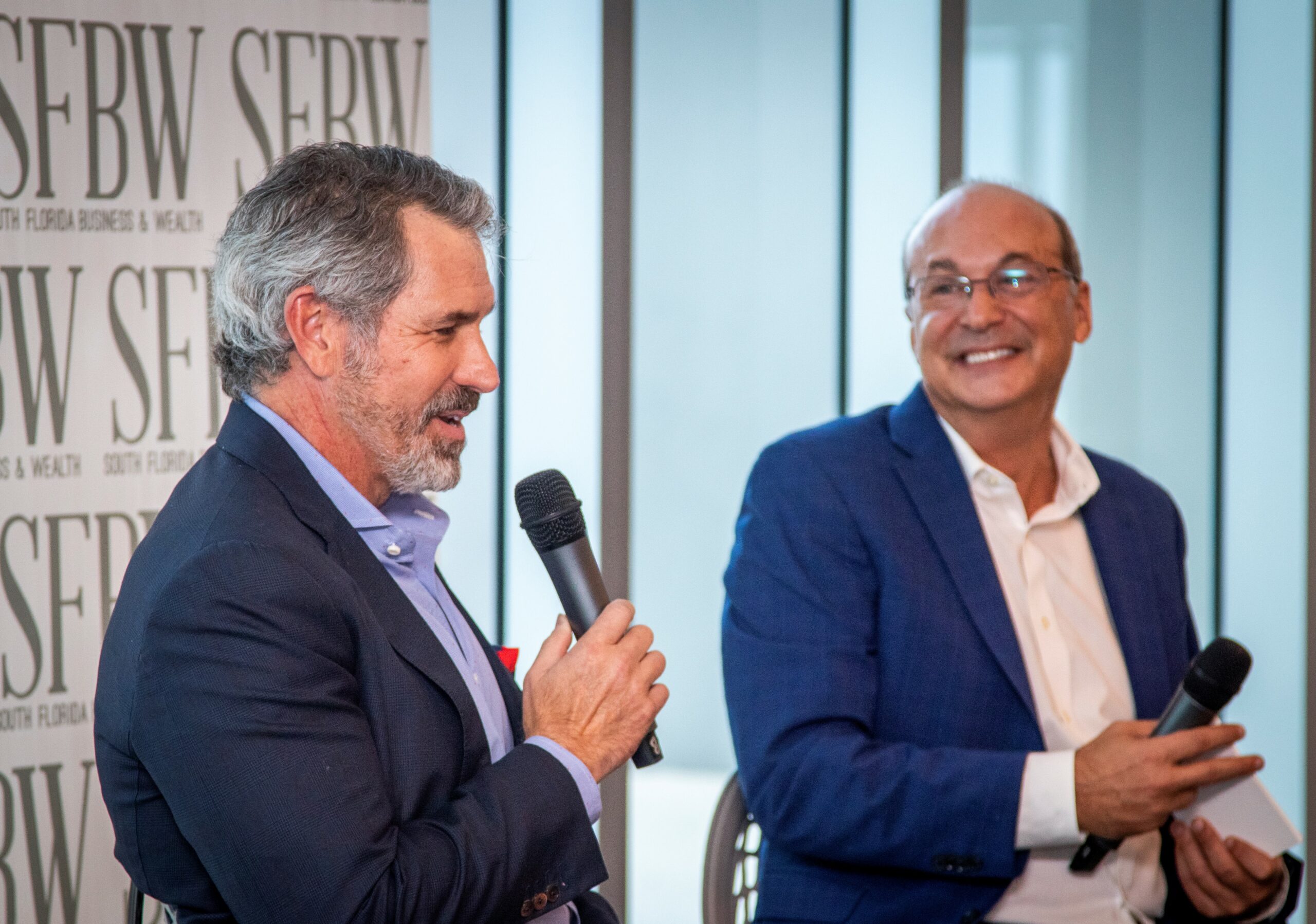 We are sitting here in the tallest building in Miami, the tallest in the state. Can you share with us some of its most impressive statistics?

I would love for you to go up and see what Miami looks like at 868 feet. You can see as far as Fort Lauderdale and all the way out to Sunrise. We have 821 residential units. Panorama was one of my father’s amazing concepts, and I have to tell you, much of the time I questioned the project. As any attorney knows, risk is something you don’t like to take, but as a developer, you have to take risks. First, we have the location—a great view of the bay and great city views. To be in the city of Miami and see it grow is amazing—even 15 years ago, it didn’t look like this. It’s vibrant, and there’s so much to do here now, and it’s real city living.

We opened Panorama Tower in 2018 and we were doing fairly well—and last year turbocharged this building. In a year and a half, we stabilized this building. That’s because people don’t want to be stuck in a 700-square-foot closet. Our average unit here is 1,100 square feet, and that is really unheard of for a developer to do. People want to live in the city, but they want large bedrooms, large walk-in closets and large living areas, and no one was offering that in the rental market. And it’s not only the size of the units— it’s the amenities we provide. We have two pools, a 15,000-square-foot gym, three movie theaters, dining experiences, game rooms, golf simulators. We have everything.

Your father has an extraordinary history, surviving Auschwitz, studying architecture in France after the liberation and emigrating to the U.S., eventually achieving the peak of success in Florida. You must feel proud of what he endured and attained.

What he’s been through has created a drive that’s second to none. It’s a lot to live up to. He’s designed six of the tallest buildings in Miami and now he’s designing the next tallest building in Miami. Somebody at one point coined the term, “edifice complex.” Our buildings keep getting bigger. The city and the FAA say that you can’t go higher than 1,049 feet, so I think the next building will probably be the last time that my father develops the highest tower. He has the drive, the ability and the guts. I try to instill in my own kids that it’s easy to do things when everything is going well, but it’s a real show of character when things aren’t going so well. And that’s how my father separates himself. He likes to say that he’s been through nine undulations of the economy, macro-wise, and certainly micro, in the city of Miami, and that has provided him, as well as our whole company experience that is second to none. Times have been great, and other times haven’t been so good, and what you do when times aren’t good is what really separates you.

Can you describe the family business and the roles involved?

I came into the business as general counsel. That has evolved and my brother [executive vice president Wayne Hollo] and I now do much of the day-to-day work in the business. My father is a big thinker; he is still creating his projects. I’ve had to move away from the general counsel role and depending on where we are on a particular project, I have to step into the facets of those projects, from design to construction. We’re a very integrated company—we develop, and have the capabilities to construct projects ourselves. We will then manage and to some extent, we lease the projects ourselves. [Senior vice president Austin Hollo, who is Wayne’s son] oversees the management aspects of the company.

So, along those lines, lawyers are risk averse. Tell me about your transition from lawyer to general counsel to executive vice president. Are you through this transition?

One of the hardest things I’ve had to deal with, as an attorney, was not always second-guessing a lot of risk. While it does help in a lot of areas, it hinders me in the development process. I don’t know if I’ll ever truly be able to fully divest myself from second-guessing. I do have to try to push [the lawyer mentality] aside at certain times. I don’t know if I would have ever built this, a project like Panorama Tower, but the product has proven itself substantially, so I can’t argue with success. Hopefully, when I have to make that decision myself, I’ll have the chutzpah.

The company also has major developments in New York. Can you speak to the exodus of many businesses and the wealthy to Miami?

New York is a huge market and there will always be people who want to be there and raise their families there. But you can’t get past the fact that a lot of people have started looking to South Florida to relocate, and it’s not just the CEOs and C-suite professionals moving their private residences; they’re relocating their companies, too. Obviously, the environment here, taxwise, is tremendous; regulatory-wise it also seems to be better.

South Florida have some great universities, and they have focused on the curriculum that modern companies are looking for. My parents’ foundation established the Tibor and Sheila Hollo School of Real Estate at Florida International University. The master’s program is a top 10 program in the country. The University of Miami and a number of other schools are really pushing technology, which they need to do. The Mayor of Miami, Francis Suarez, is really looking to attract technology companies, and I think although education-wise, we are a little behind, we do have a strong technology workforce because of our entrepreneurial spirit—we have a lot of technology startups.

Florida East Coast Realty is also developing The Towers by Foster + Partners, two interconnected towers that will be even taller than Panorama Tower. Can you describe the project?

It’s 1,049 feet tall. It will be the tallest in the state. It’s actually right here on the bay, catty-corner to us right now. The Towers are connected by bridges every six floors, which creates a very unique look. We’ve also tried to create a ground-level experience with a wide-open center—an esplanade of around 60 feet, plus the two streets on either side. We’ve created, on the north side, a connection between Brickell Ave. and Brickell Bay Drive with retail, which is very important for the connectivity of the city. So, that allows people living on Brickell Bay Drive to walk over to Brickell and places like Brickell City Centre.

You guys were really ahead of the curve on the urban living element. South Florida is 90-95% built out—

It’s not—you can always go up, and again, I go back to my father 30, 40 years ago. We specialize in high-density, mixed-use projects, and at that time, high-density was 12 stories. But my father saw that when you do a high-density project, it creates an efficiency of services. Think of how many fewer roads you need, or sewer pipes or water pipes, and how much less infrastructure you need to support it. For as many single-family residences as you have in Panorama Tower, you’d need eight miles of roads. It’s tremendous how efficient and environmentally friendly a project like this is for a municipality.