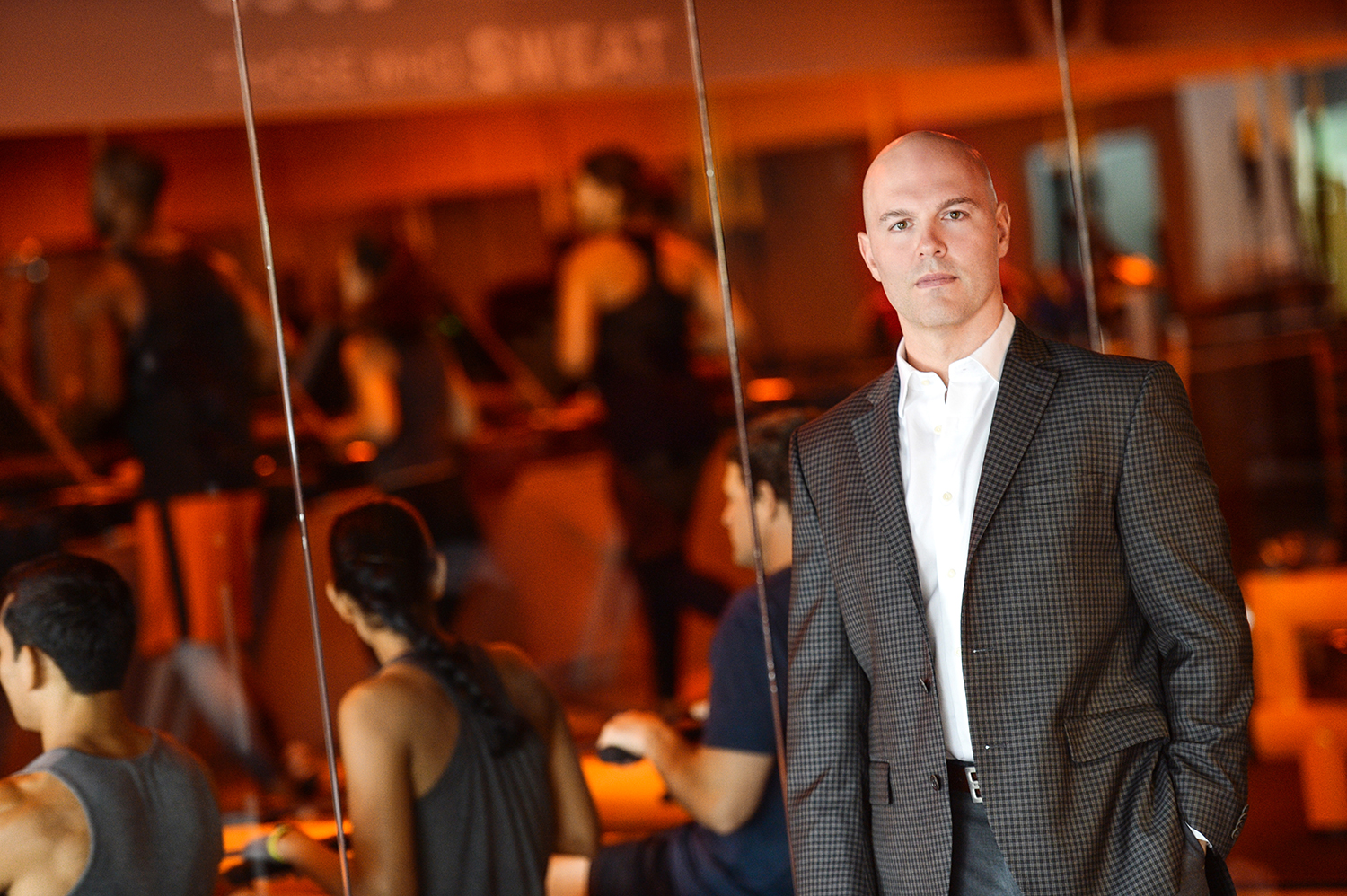 Orangetheory’s growth is as vigorous as its workouts. The company started with a single location in Fort Lauderdale in March 2010; it has now reached over 400 locations, with 675 expected by the end of the year, according to CEO David Long.

During an interview at the Orangetheory headquarters in Fort Lauderdale’s Harbor Shops, a few doors down from the company’s first location, Long provided insights on what it takes to hit hyper growth. He first experienced it while working at Massage Envy, and then again when he joined forces with current Orangetheory partner Jerome Kern at European Wax Centers. Long and Kern are also partners in Ascente Group, which has expertise on branding, business plans and franchising.

The third partner in Orangetheory is Ellen Latham, owner of the 7,000-square-foot Ellen’s Ultimate Workout in Davie, who came up with the exercise foundation for Orangetheory.

The trio self-funded in the beginning and invested the franchise revenue back into the infrastructure. The actual entity that sells the franchises is Ultimate Fitness Group LLC. An affiliate called OTF Distribution LLC sells the equipment.

Orangetheory classes are 60-minute group workouts broken into segments that are performed with treadmills, rowing machines, free weights and the TRX Suspension System, which uses straps and a person’s own body weight for resistance. Participants do intervals that get their heart rates up for a good cardio workout. Costs for membership vary by market, but about 80 percent are $159 per month for unlimited workouts or $99 a month for two classes per week.

The average studio has about 800 members, Long says. At $99 a month, that works out to be $79,200 a month in revenue, which explains the math behind the ultimate $1 million annual revenue goal for each franchise.

Orangetheory has almost 850 franchisee licenses ordered globally. The concept has spread to 20 locations in Canada, three in Australia, three in the United Kingdom, two in Colombia and one each in the Dominican Republic and Mexico. Presales are starting in Israel and the company is getting ready to sign agreements in Japan, Hong Kong and Singapore. “I think it’s pretty extraordinary to do what we are doing,” Long says.

Long was a wrestler and an all-state weightlifter when he was in high school in Spring Hill, Florida, a community north of Tampa. He started training clients as a teen and did an internship at an outpatient physical therapy clinic. He earned his physical therapy degree and an MBA at the University of Florida. Long says working at GNC during college gave him exposure to the franchising world, which would be helpful later in his career.

After graduation, Long worked at Lifestyle Family Fitness, first running the retail operations, selling juices, smoothies, apparel and supplements. That led to becoming general manager of a store in St. Petersburg. The company grew to 20 clubs before he left.

Long’s career took a brief detour when he moved to San Diego and was a real estate broker at KB Home. “That was the only time I shifted away from fitness and wellness,” he says. A friend recruited him back into the health club industry, and Long eventually became COO of Massage Envy, when it only had 15 locations. He worked on employee recruitment and then became vice president of operations. Long says he did a lot of work at the unit level, trying to help make the franchises profitable. He put in place a membership structure and systems to make the concept scalable. Long absorbed a lot from the talented team, which included regional franchise developers.

Being able to scale the business is the critical part of growth in the franchise field, Long says. “The core business model has to work very well. If there are holes in that business model when it scales, and you are not executing it, that is where it falls apart.”

Early franchisees and area representatives have to be passionate about what they are doing – silent investors are not enough, he says. “You need to have people going an extra mile at the beginning.”

Long moved from the corporate side of Massage Envy to being involved in the franchise business by investing with Kern, who was a regional developer and franchisee. Long says their skills were complementary since he’s very operations-oriented and Kern is sales-oriented.

“We were very well-aligned from a value standpoint,” Long says. “We always put the franchisees first.”

The partners founded Ascente Group to find one or two brands that were emerging that they could help grow. They came across European Wax Center, which started in Aventura and had a few units open. “They didn’t have any franchising experience, so they were struggling to get it off the ground,” Long says.

Kern and Long brought in some of the best people from their network and in less than 18 months, European Wax Center had more than 40 regions. They sold out North America. They also opened some of their own locations in Nevada and Arizona.

Long had a bug, though, to get back into fitness. It all fell into place when he and Kern experienced Ellen’s Ultimate Workout. Latham had taken a small Pilates studio and grown it into a sizable one with about 20 Reformer machines and a Spinning room. “In it’s raw form, it was Orangetheory Fitness,” Long says, adding that they came up with the name after going through hundreds of ideas. “Every name you can think of in fitness has been trademarked,” he says. “Our goal was to have something that was memorable and piqued interest.”

Orange represented an energy-heavy color; the theory part is to get into a training zone, measured by heart monitors, that stimulates metabolism and increases energy. The resulting Orange Effect is designed to burn extra calories for up to 36 hours after a workout.

Most members buy the OT Beat heart rate monitors, which cost $99, and can use an app to record their workouts, set goals and see performance summaries.

A majority of gyms make money from the fact that many members never or rarely show up and the ones that do are upsold personal training sessions. But Long says that’s not Orangetheory’s model: “People are making a definite commitment when they sign up for it,” he explains.

A key factor is the personal connection with trainers, who form bonds with members. “That’s the person you are working with in that class… [the person] that offers the motivation that adds so much fuel,” Long says.

Trainers also hold members accountable to show up, and if they miss a class, they can expect a text message. “If you start missing workouts, it snowballs,” Long says.

The workouts aren’t for people who want to have a power-lifter build. They are designed for participants to develop a lean muscular physique, Long says. “What’s most important is that person’s heart will be healthier than it was before.”

There’s also camaraderie among members, who will do activities such as 5K races together with T-shirts that have the Orangetheory logo, often called “the splat.”

Another part of Orangetheory’s business structure is using area representatives who seek and screen potential franchises and then help the franchisees launch and support their businesses in turn for a cut of the initial franchise fee and a share of royalties.

“It’s nice to have feet on the street in every market,” Long says. It also minimizes the number of staffers needed at the corporate level and cuts down the amount of travel for corporate staff.

Orangetheory has a staff of 80 in Fort Lauderdale and 70 area representatives with 200 people in the field.

Presentation is everything! Domino Arts does it for you.

Orangetheory’s growth is being boosted by a strategic investment by Roark Capital of Atlanta, which has acquired 51 franchise/multi-unit brands that have generated approximately
$20 billion in system revenues from 22,000 locations in 50 states and 75 countries. Roark’s investments include Arby’s, Carvel, Cinnabon, Moe’s Southwest Grill, Wingstop, Fastsigns, Massage Envy, Pet Supermarket and Driven Brands, which is the owner of Maaco and Meineke car care centers. The amount of investment hasn’t been disclosed, but Long says Orangetheory’s founders still have majority ownership.

When asked about an exit strategy, Long says he and his partners want to play out the business for many years. “I think we can become one of the most dominant fitness franchises in the world,” he says. “The followers and fans of our brand are really committed to Orangetheory.”

Marketing: The marketing fund commission is 1 percent and can be up to 3 percent. There’s also a minimum of $2,500 in monthly advertising for each franchise, which can include co-op dollars.