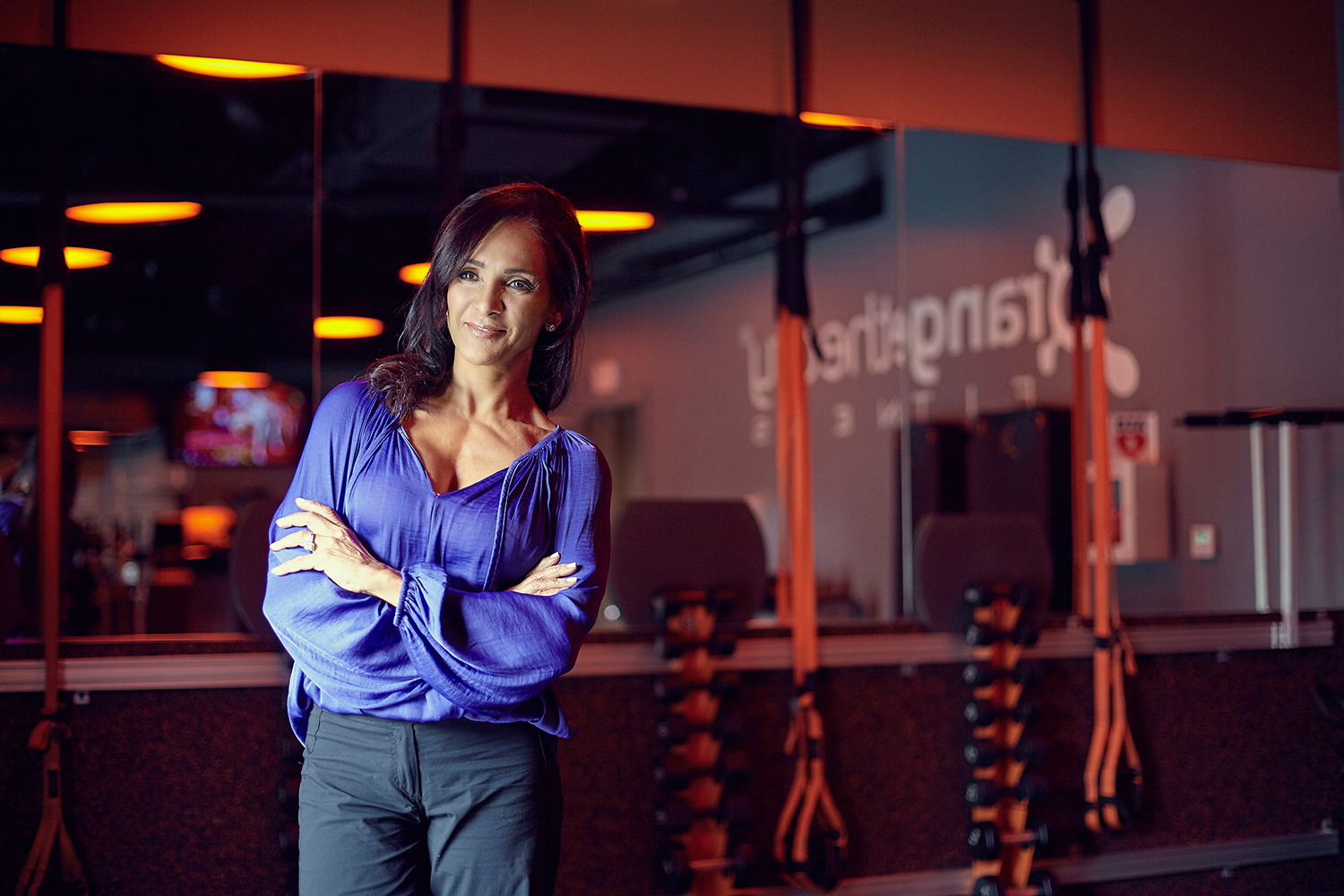 Ellen Latham is the creator and co-founder of Orangetheory Fitness, an innovator in the field of fitness, and a sought-after author and keynote speaker.

Orangetheory, founded in 2010, is based in Boca Raton and has grown to 1,300 locations with a goal of 2,500. Orangetheory is in 23 countries, and workouts are done in eight languages.

Latham was born to a large Italian family in the small town of Niagara, New York. She has a bachelor of science degree in physical education and a master’s degree in exercise science from the University of New York at Buffalo.

She has more than 40 years of experience in the fitness industry, including being a spa director and owner. Latham is the author of Push: A Guide to Living an All Out Life. Her mantra is to “look at what you have, not at what you don’t have.”

Drawing inspiration from her father and mentor, Arthur Calandrelli, Latham speaks passionately about overcoming life’s inevitable ups and downs. Her story begins as a single mother having little more than a fitness certification and an internal drive to succeed. An unexpected career setback motivated her to open her first Pilates studio, where she created The Ultimate Workout, which gave rise to Orangetheory.

She was interviewed by SFBW Associate Publisher Clayton Idle at the Boca Raton Innovation Campus. The following transcript has been edited for brevity and clarity.

So before we dive into Orangetheory, let’s get into more your background.

I grew up in Niagara Falls. My father was a phys-ed teacher and football coach at my local high school. He was a major influence in my life. He was bigger than life. They just knew him as Coach Cale in the city. It’s kind of like if you ever watch those Lifetime movies where the high school football team is everything and going to the games is the big event in town—that’s how I grew up. My father was the man. His influence in fitness and in sports had a major effect on me. I wanted to do what he did. So, I went I got my bachelor’s in phys ed and got into the same field.

What type of inspiration or mentorship did you draw from your father?

Sports psychologists will talk to sports coaches and tell them when the team’s losing, you don’t bring the team to the sideline and scream at them. You remind them of what they do well. You remind them, they’ve got the best running back in the league. That was a huge lesson, which got me through that very trying time where it’s very easy to climb under the covers and give up.

My advice is, which I’m going to give you, is my father’s other advice: Focus on what you have now and build off of that. So, what I had at that time was a Pilates certification. I was a really good group fitness instructor. I’ve been doing it for decades. So, I started a small group fitness class at a gym in my neighborhood. I literally started taking Pilates clients and working them out in a spare room in my home. And that’s how we started my entrepreneurial endeavors.

Tell us a little bit more about your book—why did you write it?

Basically, it tells a little bit about what we’re trying to accomplish in having an Orangetheory Fitness studio. We really don’t see ourselves in the fitness business. I never saw fitness as an “abstruct” concept. I think if you look at your business, and you don’t think of it that way, you might start really, designing and putting different kinds of effort in. I wanted to make sure that individuals really understood when you come into an Orangetheory Fitness studio, we’re really looking at building this kind of great culture.

Think back [to] the TV show Cheers. You know, when you walk in the bar, everyone knows your name. It’s kind of that type of thing, where we wanted this small-footprint, 33,000-square-feet studio, that you’d come in and you really bond with each other. You support each other. You’re there for each other. It’s never a competitive atmosphere. That’s why I hated boot camps—and I’ve been doing this for 40 years, so I’ve taught everything from the Jane Fonda leg warmer days. I really didn’t like that whole concept as we evolved in fitness, because boot camps were always, “10 wasn’t enough. Give me 10 more.” So, it was never enough. I wanted to have a product where it was enough to “give us what you got and let’s keep working on just improving that.” So, you’re never competing against anyone but yourself.

We say we’re science-backed. So, as an exercise physiologist, the theory of Orangetheory is to get the human heart, which is a muscle, beating over 84 percent [of your maximum heart rate] for at least 12 minutes by the end of the class. And that’s what a splat point is [named for imagining the sound of a fat cell exploding]. Every time your heart rate goes over 84 percent, you get a splat point. You don’t do all 12 minutes in one bout, it’s 90 seconds here, 30 seconds there. What I know about physiology is if I give you that at least 12 minutes, I can change your physiology. Your body’s a more-active metabolic body. I can fight cellular decline—you start declining after age 30.

I had a great interest in the science of what goes on, I wasn’t interested in a little circuit workout—a lot of people running around, a trendy workout that will be around for a short period of time. Many people say that’s probably why you were successful. Most businesses sit around and try to just think about what’s the next big thing in fitness, what’s going to be the next big thing in my company, and what I do, as opposed to that, is “Let me solve a problem.”

Why I created Orangetheory Fitness is because I ended up opening up a small Pilates studio, but there’s no fat-burning metabolic work to Pilates. So, I needed to solve that problem. Many of my members were taking spinning classes or worked with personal trainers running around the park, and they still weren’t getting the results they wanted. They were frustrated, and they came to me. That was a problem I looked to solve and I opened up that studio in 2008 with the foundation of Orangetheory Fitness—not to become a franchise, not to do anything beyond solving a problem for my little studio and my Pilates members. But how interesting when you look at solving a problem and you do a pretty good job of it, of what could happen.

I read your book over the last week. Several things stood out, but in Chapter 2, you started talking about Orangetheory as being like your multivitamin—it really works your whole body. You do it about two or three times a week, some people like to do more. But then you still can swim or do your yoga or lift your weights. I like to go once a week, on the weekends, and do a jog with my little kids, and that’s my vitamin A or my vitamin E, and you’re working out that specific muscle group or something like that.

When I say that it’s a multivitamin, let’s take a look at what a multivitamin does. It has everything that you need vitamin-wise, in essence. You’re told in your bloodwork that you’re lacking vitamin K, or vitamin A, or you might need a little bit more vitamin B. So, our workout is your multivitamin for metabolic training. I study human cells. So, now I’m going to keep very active cells. So, as I’m climbing through my 60s right now, I have a very active metabolism that doesn’t drag. I don’t have to sit and eat celery sticks my entire life, because my metabolism is active. Now, I need, as someone climbing through my 60s, more flexibility. So, I do a stretch class, I do some yoga. So, those are my additional vitamins.

So how did your workout turn into Orangetheory?

I had this workout that I created for my client members who were frustrated. I studied for about eight months of what I would do in that workout, what equipment I would bring in. I opened up the doors and it worked. Everything that happens in that room is based on science. You’re on the treadmill, or if you have orthopedic conditions on the bike or strider. The goal is to get those 12 minutes of heart rate over 84 percent. You’re on the rower because rowing is nonimpact power. So think of wattage—a 100-watt light bulb is more wattage than a 40-watt light bulb. As we age, we lose wattage. That’s why we need coffee all day. That’s why we need energy drinks. That’s why we need all this chemical garbage to keep us going during the day—your light bulb has lost wattage. I knew about this physiologically, cellularly. All workouts may use rowers in different ways. How we use them, is to put that wattage back in yourselves. So, we make sure you leave that workout back as a 100-watt light bulb.

Everything in that room was physiologically based. Even so, I was kind of surprised, when I opened up the doors, that, wow, this really took off. People are loving this just after doing three classes.

What happened was one of my members came in. Her husband was involved in franchising. He was involved with his partner in the Massage Envy franchise world. And she loved this. And she basically said, “Ellen, one of these needs to be out on every corner. This is insane. People are bribing the front desk to get into class. There are weight lists 10 deep for every class. This is crazy.”

At the time, she said that to me—and this is something important and I don’t know sometimes if it’s a woman thing, sometimes, or just a thing that we really don’t believe in ourselves full-heartedly—I actually looked up at her and I said, “April, I know nothing about franchising” and she left and walked out the door. So what a missed opportunity that would have been.

Luckily, she walked back in a week later. And I had had some conversations with some friends who are actually here in the front row and my sister and so forth. And they were like, “Of course, you can do something like this. You know yourself. And so when you have the support of others, when you are in that doubtful moment support is everything. And when she walked in the week later, I took her husband’s name. I took his phone number. We met, and Orangetheory was born. ♦