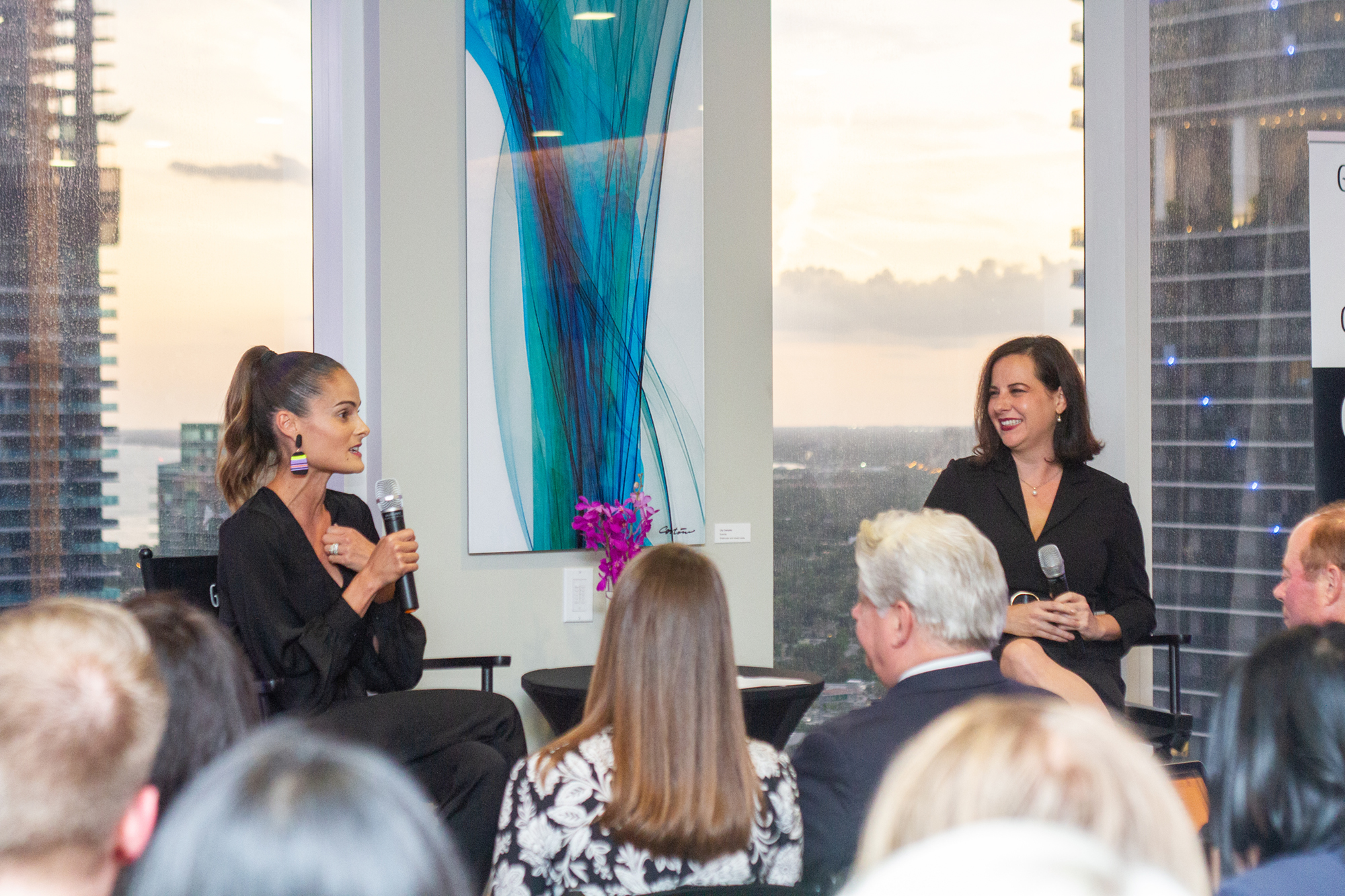 A native to Miami, Melissa Medina is president of eMerge Americas. In May 2014, Medina helped launch the annual, large-scale global technology conference, which provides a platform for the advancement of technology, the sharing of ideas, and the launch pad for innovation while connecting Latin America with North America and Europe. eMerge America’s mission is to serve as a catalyst for establishing Miami as the tech hub of the Americas.

She also is president of the Medina Family Foundation, whose mission is to fund local initiatives that focus on mentoring children and empowering families by enhancing education and quality of life. Most important, Medina is a mother and most passionate about her five children.

The conversation for this edition of “CEO Connect” took place in the Miami office of law firm Greenspoon Marder. Medina was interviewed by SFBW Associate Editor Andrea Richard. The following interview was edited for brevity and clarity.

What does your role as president of eMerge Americas entail?

eMerge Americas is basically a global technology conference and platform where we bring together entrepreneurs, investors, business executives, government officials, from all over the world, right here in Miami to discuss technologies that are transforming industries. It really was an effort to spark a whole new ecosystem in Miami. We’re a very mission-driven organization. As president, I feel we are still very much a startup, although we’ve been now around five years. I have learned multiple roles, from business development, to sales, to marketing, to all aspects of the business and running a team.

What kind of tech hub are you trying to create?

The idea basically was my father’s, and he came to me around 2011. My father is a tech entrepreneur here. He started in real estate, and then sold all the real estate and guided the company into technology. He sold Terremark Worldwide and its cloud infrastructure to Verizon. He had a really exciting success story for Miami.

After that, he came to me and said, “You know, this community has been so good to us. Miami has been incredible, but there’s also been a lot of frustration working in Miami and having a technology company.” I worked at Terremark as well and felt those frustrations. And what were those frustration? People didn’t really associate Miami with technology entrepreneurship up until about five or six years ago, more or less. And so, he had a conversation with me. What can we do to help change the story? And what we said was, we’ve never been in the business before, but why don’t we try to convene all these thought leaders and happenings here, so maybe we could begin to change that mindset and begin to create a whole new ecosystem.

Miami is the gateway to Latin America for every other industry, but it never was for technology and entrepreneurship. And we just felt that there was a void in the market and a potential opportunity to tap into that, and geographically we were positioned to be that connection.

What are the challenges of building this in Miami and the advantages?

I’m very much a glass-is-half-full person. There were a lot of challenges trying to build something that was initially a concept—selling something to people that didn’t exist. We had pushback. But we had support. Miami Commissioner Francis Suarez, who is now mayor, believed in the vision. And because of people like him, and because of other companies that we had built relationships with, working in Terremark, believing in us and saying, “OK, we’re going to trust that you’re going to be able to build this vision,” is why we’re able to launch in 2014 and grow organically year after year.

I think there’s so much opportunity with building something new, which in my opinion, excites me. Yes, that comes with challenges as well. There is an investment gap that we need to fill, but what comes first, the chicken or the egg? We have tons of startup activity. We are now the No. 1 city in all of the U.S. for the last three years in startup activity—over Silicon Valley, over Austin.

Now, I can tell you, that we couldn’t pay investors to come to eMerge the first year. We were begging investors from everywhere, and Miami’s not really a tough sell, but for some reason why, when we would go look for deals in Miami, there wasn’t anything there. And now, five years later, it’s the opposite. They see the startups that we’re bringing and that are part of our ecosystem are extremely high-quality and have a lot to offer. And now the story and the narrative are changing. And that’s exciting for me.

Are you bringing something new for the next eMerge?

One new thing I need to highlight is kind of going back to those investors. We’ve had so much interest from investors that we are now partnering with one of the startups that was in our startup competition, who has created a platform to connect investors and startups in a much more methodical way. So, we’ll be able to have investors sign into this platform, once we select our startups, and they’ll be having meaningful connections that we’ll be able to track as well.

Would you please tell us a little bit about Women in Technology? Is that something you created?

The first eMerge exceeded our own internal expectations, but one thing stood out: There were not many women there at all. And, you know, looking back, that’s something that we should have thought of a little more carefully because technology is very male-oriented. We all noticed on Day 1 that we needed to do something about this and we needed to create a platform where women are highlighted and were able to showcase their story.

It was our content director who came to us and said, “You know, I really think that we could launch a whole summit based on this.” We supported her, and here we are, four years later, and we’ve increased our women attendance. This year, it was at 37 percent of the 15,000 attendees.

What’s your advice for women who want to be technology entrepreneurs?

I think not being afraid of asking for help or asking questions. I think attending events and networking helps. Having a handful or two or three mentors that you can look up to and ask questions—family or people in the business community. As for me, my father, my mother, but also other women in tech were mentors.

One of the biggest things my mother taught me is being empathetic. My dad has taught me a lot about business. One thing in particular that he’s always taught me since I was a little girl, was that the most important thing is to keep your word. Always. He’s like, “I don’t care if you get older and you sign a contract that wasn’t what you intended, you need to do what you said. You have to keep your word. Your reputation is everything.”

You also are running the Medina Family Foundation. What can you say about that?

The Medina Family Foundation is a nonprofit organization, and our whole family is involved. It’s about giving back to this incredible community. Both my parents came here at a very young age, 6 and 13, and this country, specifically this community, provided so much for them.

I think establishing the Medina Family Foundation was all about us being able to help future generations and help establish the city further and help empower families however we can, whether it’s financially or emotionally. It’s very important to us.

You have five children and you run a premier tech conference. Any tips for work-life balance?

I get this question asked a lot. One, wine helps a lot! The truth is, I would not be able to work as much as I work without my support system, including my mom and family.

I am lax about certain things but uber-organized when it comes to scheduling, and also about prioritizing. Sometimes, business has to come first. Whoever says there is a perfect balance is not honest. Sometimes, there is a meeting in New York but my child is being inducted into the honor society, and he’ll never forgive me if I’m not there.

What is one of your proudest achievements?

I think the year that I had my fifth child, which was 2016, I had her less than two weeks before our annual conference. I had a C-section. And two days after I got home, the conference started. Looking back, having gone through those days, and being there day and night, and then going back to the mom work-life balance …

I think also the first conference and seeing it come to life—seeing so many people and partners and organizations coming together.

Have you ever experienced gender discrimination?

I definitely have. I’ve showed up at a meeting and people are waiting for someone else to come in the room. I’ve been in meetings in Latin America, and people ask me to get them coffee.

The confidence in me has gotten better, and I just don’t let those things affect me anymore. I want to make a difference. I’m very proud of my work and what I do.

I just move on, and then I think they respect you for that. And I do think, though, that it’s changing. The #MeToo movement has been something very powerful the last couple of years that has helped change the landscape. I think men are being a little different about how they approach a situation or a comment they might say, and there’s a lot more women in leadership roles. ♦

The evening begins with a cocktail reception for about 100 guests followed by the highlight of the event, a live interview conducted by Andrea Richard, Associate Editor, SFBW and a well-known woman C-level executive who provides insight into their personal lives, careers and views on issues affecting the business community.