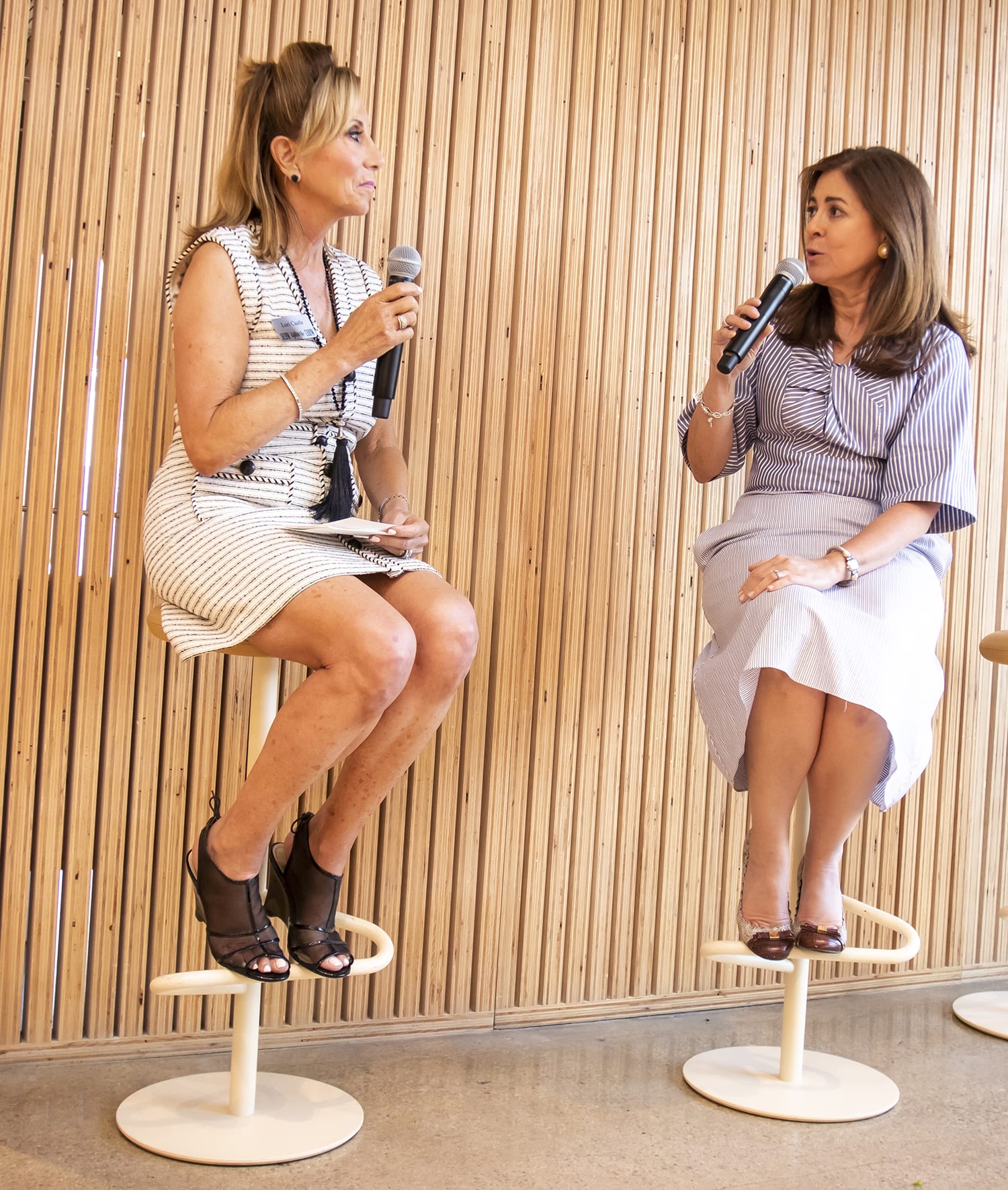 Maria C. Alonso became president and CEO of United Way of Miami-Dade in 2017 after a 22-year career with Bank of America and its predecessor, NationsBank. Working alongside a team of nearly 200 professionals, she guides the strategic direction, operations and finances of the county’s largest private funder of health and human services.

Alonso has an MBA in marketing from Florida International University and a bachelor’s degree in industrial engineering from the University of Miami.

She was interviewed by SFBW Market Manager Loris Castle at WeWork in Coral Gables. The following transcript has been edited for brevity and clarity.

What are the biggest challenges at United Way of Miami-Dade County?

One of the great challenges is how do we solve, address and help our community issues—how do we elevate the quality of life for working families so we can all have a better economy, do business, raise families and have fun and enjoy everything Miami has to offer?

Let me share some statistics with you so that you get a sense for who we serve as part of our work. Six out of 10 households in Miami-Dade County are living paycheck to paycheck every single day. They are one emergency away, one disaster way, one unplanned accident away from financial instability. There are 20 percent living under the federal poverty line and 40 percent who are working families but earn too much to receive some of the programs and services that they would be otherwise qualified for by the government.

Does that jibe with what we all see on TV, or what we hear about Miami-Dade County? This is a beautiful community, but not everyone is privileged enough to live this reality. They live a very different reality. There are kids in Overtown who have never been to Miami Beach, who have never been in the Atlantic Ocean. That’s a challenge.

Another challenge is, we’re a 95-year-old organization, so one of the challenges is to remain relevant, to remain connected and continue to be able to tell our story in a way that inspires people to join our work. At the end of the day, we are a community-led, community-driven, volunteer-driven organization.

I was born in Detroit and my parents were immigrants, which is such a popular story in Miami. My dad was a doctor. My mother was a nurse. They found jobs and they passed boards in Michigan before they passed them in Florida. So, they moved to Detroit and worked there.

My parents separated. My dad went to New York and my mom found her way back to a climate she was much more comfortable with. I’ve been in Miami ever since. I am a product of the local schools. I went to a private school because she felt more comfortable with me in a smaller setting. I am an only child. It was my mom and me throughout our entire lives.

After nursing, she became an entrepreneur and opened an adult living facility. I grew up with my mother as a role model. She was definitely a source of every inspiration for me. She was a very hard worker, and really felt that education was a baseline. She was disappointed because I didn’t become a doctor. I was good with math and I just felt into it, and so I went to UM and I practiced engineering for two years.

Does anybody remember BellSouth? It was a real big name in the 1980s. The time I spent there was actually great, but I have to tell you, after two years, I decided I wanted to go back to school and I got my MBA. I am ultimately more people-focused rather than paper- or numbers-focused.

I worked for Bank of America for 22½ years, but never opened an account [for others] or wrote a loan. I was never a banker. My entire career was in marketing. My focus was, how do you tap into the growing Hispanic population? This was 1995, and it was national. As we grew, we tapped into bigger Hispanic markets and merged with Bank of America.

After that, I went into international private banking and I became the marketing director. My clients were the relationship managers that work with clients in Latin America, in Asia, and in Europe. I would put pitch books together and develop the collateral in four languages.

It was just wonderful. I learned about estate planning, asset management—things that I had never been exposed to. For the last 12 years of my career, this is where I came home to the community foundation aspect and that passion to make an impact where I live, where we work. That was the driving force for 12 years. I led our investments in the community, both from a foundation perspective, as well as sponsorships. I also led our employee-engagement strategies, volunteerism and board service. I got very exposed, got very involved.

I have to say, if I had to do it over again, I would have done it sooner, because it was just so rewarding. I think that is why I get this question a lot: Why would I leave all that? And I think that it was, to me, a natural progression. I was already involved in the community in such a deep way and from a United Way perspective. You heard I was on the board. I’ve been a volunteer for over 20 years. I just think it’s a tremendous opportunity to give back and to make an impact in the community that I that I love.

You mentioned being the first Hispanic segment manager of Bank of America, and you’re now CEO of the very prominent United Way. You obviously show a lot of courage, and you’re not scared to take risks. What is that like?

I try not to focus on that. I try to focus on what’s the end goal. I really believe that luck is always a factor. Obviously, you need to pair it up with preparation, but I’ve always been lucky. I’ve had great mentors, most of them men. They’ve been amazing teachers to me, have also inspired me to try to do more.

I will tell you that when this opportunity came up—not one that I was seeking, by the way—I thought of every reason why I couldn’t do it and my husband gave me every reason why I had to do it. The best line was, “Well, if not now, when?” At the time, I was 54, so he’s like, “What are you waiting for?”

It’s a big responsibility. However, I have a wonderful team, incredible supporters, volunteers … but it’s a big job. I am excited to help shape our future, obviously very cognizant of the rich history and the impact that we’ve had in this community but with the realization that you can’t continue to do what you’ve always done. So, it’s a new day and we are trying to recast ourselves in a way that is relevant to the needs that are bigger than ever.

What advice would you give your 25-year-old self?

I think I said it earlier: I would start sooner. I would start that networking sooner. We all have colleagues in different sectors from different walks of life that you never know when you’re going to need them. Be involved with the Greater Miami Chamber, or the Coral Gables Chamber, for that matter, since we’re here. (My dear friend [Coral Gables President and CEO] Mark Trowbridge would kill me if I didn’t say that.)

I would have started sooner because what I brought out of that is more than I definitely ever invested in it. I think it’s also really grounding to be led by knowing that there’s something bigger than you. Faith, obviously, is a no-brainer and necessary. I also think community, right? It’s not just about our own individual circumstances, but those that are around us.

What advice would you give women on what they need to do—even when they are stagnated or have fear?

I think as women, the first thing we really need to focus on is, how do we support each other? How do we prop each other up and candidly admit that that there is fear. I had the pleasure of hearing Indra Nooyi, who was the first female chairman of PepsiCo. She has since retired, but she’s a rock star. She talked about really creating that sisterhood.

I talked about mentors and I told you that, in my life, the most significant mentors have been men. There’s a generational component to that. When I was growing up, there weren’t a lot of female engineers. There weren’t a lot of female role models, but that’s changed today, which is obviously a step in the right direction. I think we just have to be better supporters of each other and really just prop each other up, and when we’re down, we all fall. We all have issues. We just have to keep strong and not focus on the little things that happen along the way.

What’s one of the biggest initiatives for the United Way of Miami Dade 2019?

As part of this anniversary celebration, we really wanted to have a call to action. It’s called the “9,500 for 95” challenge. We just started April 24 and we’ll run through April 30 of next year. We’re going to have 95 community projects and we’re looking for 9,500 volunteers. … I ask you to join us. Go to volunteermiami.org and join us, even if it’s for two hours or if it’s for an hour.

The evening begins with a cocktail reception for about 100 guests followed by the highlight of the event, a live interview with a well-known C-level executive who provides insight into their personal lives, careers and views on issues affecting the business community.