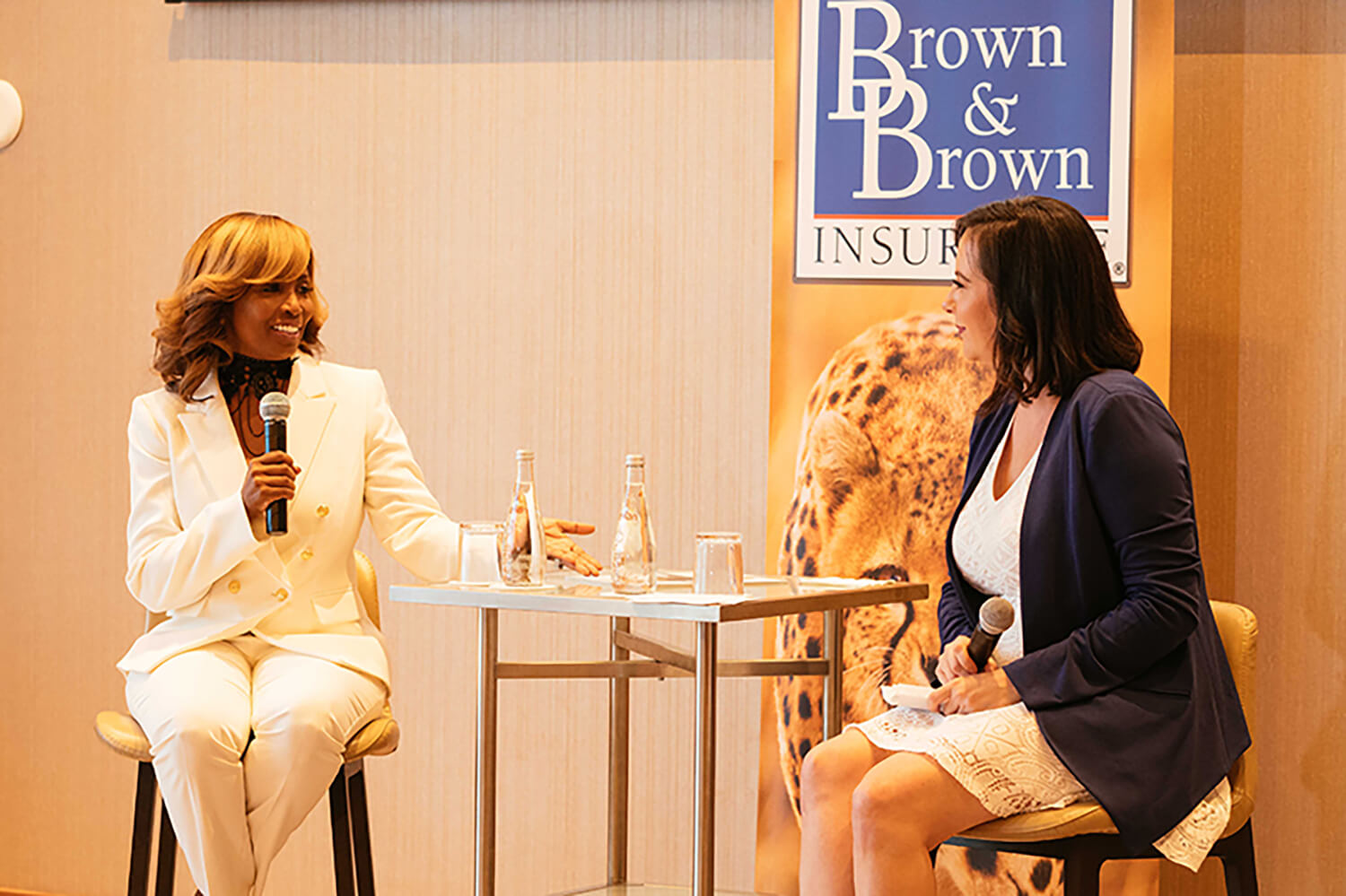 Success with a sense of style

Traci Lynn is an in-demand motivational speaker, author and entrepreneur, as well as a wife and mother. She’s also earned two doctorate degrees in divinity and theology.

She started Traci Lynn Fashion Jewelry in Philadelphia in 1989 with $200 at age 25. Today, the company sells high-quality, stylish, affordable jewelry through a wholesale network and direct sales. She’s grown her business, now based in Fort Lauderdale, into a multimillion-dollar enterprise with 35,000 independent sales consultants in 46 states.

She has earned the University of Pennsylvania’s Carrier of Hope Award for her community service and the Spirit of Greatness Award for her business leadership. In 1994, Essence magazine called her one of the most-innovative entrepreneurs under age 30. She also was featured on ABC’s “Good Morning America” for owning one of the top-grossing businesses among young entrepreneurs. In 2017, she received the National Coalition of 100 Black Women’s Madam C.J. Walker Award for entrepreneurship. Over the last three years, she and her company have raised more than $350,000 for the American Cancer Society.

This “Women of influence” was at the Conrad Fort Lau–derdale Beach. Associate Editor Andrea Richard moderated. The following transcript was edited for brevity and clarity.

The last time we spoke was for a cover story in our April 2017 issue. What’s new since then?

When we talked last, we had purchased our building, but it needed a complete renovation. The Girl Scouts built it in 1984, so it had ‘84 all over it. We had to bring it up to 2017-18 standards. We just moved in about two months ago.

You have been an entrepreneur since what age?

I have been an entrepreneur since 4. My grandmother sold clothes and accessories from the trunk of her car. My job was to remember the client’s name and how much they owed us.

I remember from our last conversation when you were 15 you opened your own hair salon, right?

I wanted to prepare for the prom. I wanted extra money, so I opened a hair salon. Even in high school, I got voted the best-dressed, but not the most likely to succeed.

Have you ever worked for anybody else?

I worked right out of college. I sold stocks and bonds. The problem was, every day at noon, I went to sleep at my desk. I was bored out of my mind, so I wondered, “How many years can I do that?” I just thought for myself, there has to be more to life. That’s when I started doing some entrepreneurial things.

What gave you the idea to go into jewelry?

I started with clothes, but I realized jewelry was one-size-fits-all. The market was better in jewelry than clothes.

You started with the company with $200 and did it for years and then something changed. Can you tell us about it?

By the time I was 28, I made a million dollars. What changed was that I really fell in love with the people. Not just the money of the business, but motivating the people just inspired me to no end. I started a sales force. So what happened is, it began to grow beyond what I could control.

Around that time, you decided to fold the business and went into your other career.

I had such great success, but maturity-wise, I wasn’t ready. I didn’t have the role model that we have today as women. I had women in the business who were the age of my mother, and I wasn’t prepared for the negative side of business. I was helping people and they were kind of against me, so I walked away. I shut it down.

You ended up going into motivational speaking. How did that happen?

My husband told me I should listen to motivational tapes. I was not going to listen. I was in the shower and he put the tape on and I had to listen. I came out of the shower and I listened to a gentleman by the name of Les Brown, and I said, ‘Oh, my goodness. That man has stolen every line I ever said.’ [Laughs] Then I made a mission to meet Les. Not only to meet him, but to travel with him and speak with him. I met Les six months later, and he took me on tour with him maybe a month after that meeting.

Then you went back to your jewelry business.

I went back because I wasn’t finished.

You weren’t finished? Why is that?

Well, it had more money to be made! I went back because, honestly, I wasn’t finished. I left abruptly, and I had learned so much more about how to do business and what business is. I opened up a franchise. I learned something that I did not have when I was business before, which is a system. You need a duplicable system, especially in the type of business I run. I actually ran this franchise for six or seven years and then I went back to jewelry. I had the system. I had the sauce.

You moved to South Florida five years ago. What brought you here?

One of the main things, honestly, was the weather. I lived in Pennsylvania 20 years, but the weather was turning into Michigan weather. My corporate office was in Delaware. Delaware is a banking state, especially in the part of Delaware where we lived. We could not get the talent and attract the talent from fashion, so I came to Florida to visit. I happened to hear the news about the economy and how many people were in fashion and out of work. Then we were moving heavily into the Hispanic market, so I realized coming here I would find everything I needed.

You have a sales force of more than 35,000 reps. How do you grow and build and manage that many sales pros?

We started with a team of two—my husband and myself. We grew organically. We grew to the point where we had no loans from banks. We just reinvested, reinvested. I had a simple rule that if I couldn’t drive to you, you couldn’t join the business. I reinvested my time and myself in the lives of the women I have touched. I did that for three years until we got to No. 2,000. We call her “Stacy 2,000.” We decided we could expand the brand and then go national.

How did that experience as a motivational speaker affect your operations today?

It allowed me something that’s very important and critical in all businesses, which is being able to communicate—being able to effectively tell the Traci Lynn story. I meet my sales force right where they are, in their living room with Facebook Live. I’m on webinars. I’m doing lunch-and-learns. You name it. By the time they meet me at conventions with thousands of women screaming and shouting, they already know me.

Do you have any career regrets?

The fulfillment center was an epic fail. I could have lost my entire business. They couldn’t ship. So I had to close my office, bring in my entire staff, and then I had to hire 25 temps and teach them how to pick, pack and ship in somebody else’s warehouse. I had to do that for a month. It was a bad, bad, bad scene, but we lived to tell the story.

One of the things people ask me all the time: “If you had to do it over again—those big moments, those big failures …” my answer would be yes. Why would I do it? I learned what the books could never teach me. I learned, first of all, how to make sure I check things out and go back and back and don’t make quick decisions like that.

What’s next for your company?

Expanding into Canada is one of the things. We just registered in the U.K. We are in Costa Rica, so I’m excited about that. We just got registration also in Trinidad and Tobago, so we’ll be going into some of the islands.

The other thing I’m very excited about is expanding the family of brands. We’re not just going to be jewelry and accessories anymore. We’re diversifying into some other areas.

Any advice for aspiring CEOs or the next generation of women?

Get a mentor. I belong to so many groups. South Florida has been so wonderful to me and welcoming to me. It was the right decision to come. I belong to quite a few groups and sometimes we have to meet at 7:30 in the morning. It’s wonderful, because these are C-suite women and we share the same concerns. I’m also in reading clubs and book clubs and different organizations. I’m currently in school five nights a week, from 6 to 10 p.m. The next dimension of Traci Lynn requires something I don’t have yet. ♦