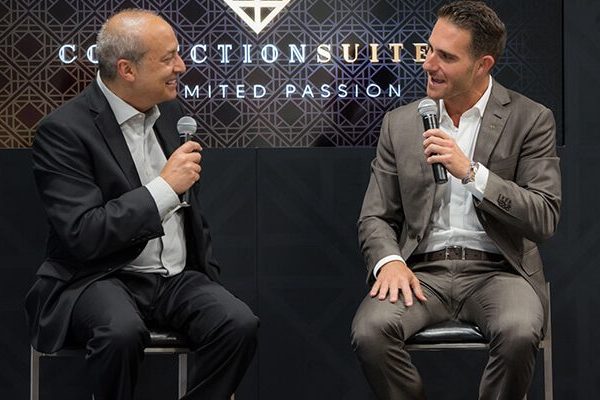 Brett David became the CEO of Prestige Imports Motor Group in North Miami Beach at age 19, when his father, Irv, died of a heart attack. During his first year as CEO, Prestige Audi was the top-volume Audi dealer nationally, a feat he repeated twice. In 2015, he sold the dealership for a record $80 million for a single-location Audi dealership.

Prestige’s Lamborghini Miami has been the automaker’s top-volume dealership globally for 15 years. David opened a Lamborghini dealership in West Palm Beach in 2008, the year after his father’s death, and, in 2012, secured one of three Pagani dealerships in the United States. In October 2017, David debuted Prestige Imports 2.0, a 17,000-square-foot, state-of-the-art dealership at 15050 Biscayne Blvd., in North Miami Beach. David added a marine and aero division to his business with VanDutch Marine and Midnight Express Power Boats and a partnership with JetSmarter.

David is a supporter of charitable organizations, including Kids vs. Cancer, Make-A-Wish and the American Heart Association. In 2011, David created Ride2Revive, a foundation that gives children affected by life-threatening diseases memorable, adrenaline-filled driving experiences.

David was interviewed by SFBW Chairman and CEO Gary Press at Collection Suites in Doral. The following transcript has been edited for brevity and clarity.

What struck me the most about your bio is that you were forced into this because your father had a heart attack when you were 19 and you jumped into the business. That’s unbelievably difficult. Were you scared?

It was, definitely—and an incredibly difficult thing for me to do. At the end of the day, no matter how business-minded I am, family is the most important. My father was not only my boss, he was my best friend, my mentor. He was a man who taught me at an early age how serious work was and how important working together and being a part of the family business was. When it comes to success, I don’t attribute it all to myself. We have an incredible team, and I get a lot of support from my mother and sister.

When everything happened, we didn’t have time to grieve. We never had time to sit down as a family and say what was going to happen. My dad wrote a letter to me before he died. It was pre-stamped and handwritten on top of it, saying: “Be the change you wish to see in the world.” We know Gandhi is credited for saying that. Sitting and receiving a letter from my father that stated, “Brett, if you are reading this letter and I didn’t pass because of a boat accident, car accident, motorcycle accident, and it happens to be because of business stress, I want you to live a balanced life. Live life and keep all the materialistic aspects at bay.” I remember sitting there and I was thinking to myself, looking at my mother and younger sister and the way the attorneys were speaking and the way they were discussing all sorts of things about this lifestyle, it was very materialistic what was said. It was all about what could be kept. And, meanwhile, I had watched my father every day busting his [tail].

I watched my father work his entire life. Not because he worked to live; he did what he loved and was an animal at it. For me, at 19 years old, to bury my father, was scary and surreal. In life, we go after these monetary things, these things that don’t really mean much. To witness all that and go through it, fast forward to being in the boardroom, where we were deciding whether to sell the company or keep it going, I knew that at the end of the day, I wasn’t going to be able to define true success and true character-building if it was just about monetary things.

I didn’t want the loss of my father to define us, but let character define us. And unless I was going to go ahead and give it a try, I would live the rest of my life in doubt and in fear. Even though my father told me, “Listen, son, celebrate and do what you need to do,” I wanted to prove him wrong.

That’s an amazing story. What are the other philosophies from your dad that you’ve used? And what are some of the things your dad did that you decided you wanted to do differently?

My mother and father both instilled a very, very hard-work sense in me that nothing comes for free. And my father told me that whatever we accomplished in business was because we were working as a team.

That saying—”Be the change that you want to be”—stuck with me more than anything. At the end of the day, I saw friends my age that were focusing on different areas, goofing off. For me, I wanted to be different. We are part of a larger family, and our larger family was the 142 employees at the time. My dad was the kind of guy who made himself a part of the team, and made it known that he was part of the team and he never put himself on a different level.

A couple days after he passed, and after I sat in the boardroom with my mother and sister and made the decision that we were going to continue, we walked into the service area, where the whole team was. I remember saying, “Guys, the leader is gone and the ship is still going to sail. I will never be my father. I will never attempt to walk in my father’s footsteps. But with everyone’s help, I’ll be able to walk next to them. We will trip. We will fall. We will make mistakes. But at the end of the day, if we work together we will all be successful. But if you leave this meeting, and you doubt the future of this company, and you go home and speak to your wife or husband and you say, “I’m scared about working for Prestige Imports,” there’s the door.

You’re a CEO and a millennial. That must have a combination of advantages and disadvantages.

It is a mix of both. Being young is a great thing. It brings a lot of elements to our business. It brings a lot of youthful, creative thinking and a lot of creative marketing strategies. Also, it helps to modernize our company by bringing in social media and technology into our company. There are negatives, and one of them is my age, but I use it to my advantage. It goes back to that I didn’t create this success; I am managing my father’s success.

What’s your strategy for dealing with jerks?

You look them in the eye, be real and confident. A million people can sit in front of you to chip you down and try to insult you. I meet tons of people I respect, and some I never want to do business with again. It’s all a part of the game.

Tell us about the brands you sell now and why they are part of your portfolio.
When dad passed on, we inherited Lamborghini, Audi, Lotus. But after that, we had an opportunity to receive a Pagani [franchise]. In today’s automotive world, this was the most-anticipated super sports car that ever entered American soil. This is the vehicle today that is still driven by its creator, Horacio Pagani. Any car enthusiast would want to meet him and break bread with him. My dad had told me that this man is the next living legend. .

A multimillion-dollar Pagani was on display

This CEO Connect was held at Collection Suites in Doral, which has condominium suites for collectors

Why the Pagani is so significant to us is, when it came out in the duPont Registry, mentioning that it was coming to America, I called the factory and never got a phone call back. Two weeks later, I called again. No response. And this went on for six or seven months, so I realized there was something deeper going on. My general manager at the time suggested that if we can’t get the franchise, we should buy the car and let’s see what happens from there. So I called the manufacturer, saying I was going to Italy with my colleague to buy a Pagani. And, you know what? I got the phone call back, and we got the franchise. We went to Italy and had an incredible tour and meeting.

He later tells me that he promised a guy, 10 years prior, that he would get the franchise. He was talking about my dad and didn’t realize I was his son.♦

The evening begins with a cocktail reception for about 100 guests followed by the highlight of the event, a live interview conducted by Gary Press, SFBW Chairman and CEO and a well-known C-level executive who provides insight into their personal lives, careers and views on issues affecting the business community.