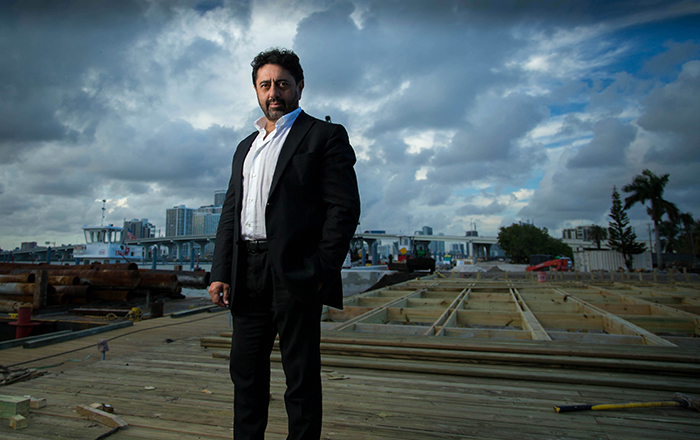 Mehmet Bayraktar’s quest to develop the $1 billion Island Gardens project started with a simple package in the mail. He had just flown back to Istanbul from Miami in February 2001 when he received an RFP to develop a site on Watson Island along the MacArthur Causeway, overlooking downtown Miami and the cruise ships at PortMiami.

“I was just in Miami the day before,” says Bayraktar, who had been scouting around for opportunities. He thought to himself, “Watson Island? I know exactly what it is. It’s just one big empty space that people run around and do nothing.” At the time, neither Jungle Island nor the Miami Children’s Museum were open.

The island, which is named after an early 1900s Miami mayor, was given to the city by the state, but it had deed restrictions of being used for a public purpose. While the matter at hand seemed simple enough at the time – submit a proposal on what to do with 13 submerged acres and 10.5 acres on land – Bayraktar was embarking on a 14-year odyssey that had to overcome skepticism, opposition, myriad governmental approvals and the Great Recession.

Bayraktar, who is founder, chairman and CEO of Flagstone Property Group, is finally getting a return on his efforts with the opening of a mega-yacht marina that will provide a new venue for the Yachts Miami Beach show in February. Real estate investment bankers at HFF are also busy showing packets to investors for the land development, which would include two luxury hotels, boutique retail spaces and restaurants with spectacular views.

Bayraktar discussed Island Gardens during an interview at the project’s preview center as workers were outside screwing in planks for the dockside promenade that will be used for the show.

While Island Gardens started with a package in the mail, it almost seems like Bayraktar’s life was a steady path toward the project. He was born in Kayseri, a historic, industrialized city in the center of the Asian part of Turkey.

Bayraktar’s grandfather started selling cars in the 1940s, and by the 1950s, he was importing cars from the U.S., along with trucks and tires. His father and uncle joined the business and started manufacturing components and parts. These days, the family exports axles and brakes to the United States. The family is also the distributor throughout Turkey for Citroën, Infinity and Subaru, encompassing about 200 dealers.

In the 1970s, Bayraktar’s father was managing partner of a joint venture to build a tire factory in Turkey under license from BFGoodrich and was making frequent trips to Akron, Ohio, the tire capital of the world. That’s how Bayraktar ended up going to St. Vincent-St. Mary High School, a Catholic high school in Akron that happens to be LeBron James’ alma mater. He then went to the University of Akron and majored in business and marketing.

“I used to come down to Florida every year – one time during spring break and the other time with my parents and my uncle,” he says. He actually wanted to move to Florida after graduation, but his father told him, “We invested so much in you. You have to come back and work in the family business.”

Staying with the family business turned out to be a stroke of luck, since the Turkish economy was opening up under Prime Minister Turgut Özal.

Bayraktar’s father pursued opportunities in real estate and developed the first modern indoor shopping mall in Turkey, Galleria Ataköy, which has 120 stores throughout its two stories. “We had ice skating, the first food court in Turkey, the second McDonald’s, the first KFC, the first Pizza Hut and the first Baskin-Robbins,” Bayraktar says. The Ataköy Complex surrounding the mall also includes two hotels, waterfront dining and a marina – just like Bayraktar is planning on Watson Island.

The Bayraktar family also went on to develop the $150 million mixed-use Carousel Shopping Center, with movie theaters and a 1,000-slip marina, and the Izmit Outlet Center, the first luxury outlet center in Turkey.

Bayraktar became marketing manager of the mall and later became involved in the financial, manufacturing, food and service operations of the family’s holding company. He then led the real estate arm and eventually became chairman and CEO before founding Flagstone in 2001.

The Galleria and Carousel both won awards from the International Council of Shopping Centers: the Galleria won a design award in 1988 and the Carousel won a marketing award in 1995. Bayraktar served on the ICSC’s worldwide commission and its European board.

Bayraktar traveled to the U.S. a lot for business and pleasure and bought a home in Celebration, a community that received widespread publicity when it was developed near Disney World. He lived there full time from 1998 to 2004, taking more time to rollerblade and spend time with his family as the Lost Decade in Japan and the 1998 Russia financial crisis caused a slowdown in global business.

Bayraktar began thinking about doing projects in Florida, talking to brokers and real estate advisory firms, as he looked in Orlando, Naples and Tampa. Then came the package in the mail about Watson Island. After he received it, he found a 1997 consultant study for the city suggesting that a mega-yacht marina would be the best use of the site. His reaction: “We have to create the elegance of Monaco, but the relaxed style of
St. Tropez and Mykonos,” he says.

The ground lease was signed in early 2003, but it took a couple of years to get zoning and environmental permits and approval as a development of regional impact. Bayraktar moved to Miami
in 2004.

“In 2005, we got signed up with hotel flags. Then Bank of America and WestLB of Germany became our banks. So, we were up and running,” he says. The project was hit with a lawsuit over the issuance of its major use special permit, which took a couple of years to resolve, but things still looked good as the Abu Dhabi Investment Authority (ADIA) came on board as a partner.

Keeping a vision during the recession

Then came the market crash in 2008. The banks and ADIA pulled out. Bayraktar says he spent time riding his Harley, and in 2010, he took his family on a 15,000-mile, four-month ride around the United States in the Rolls-Royce Phantom that he bought to help market Island Gardens.

“I had never lost my trust or vision on the site in Miami, what I did or what I proposed,” he says. “But there comes a point, no matter what you can do, that you can spin your wheels.”

He noticed things started to turn around in 2010. And in June 2013, Jorge Pérez’s Related Group and Stephen M. Ross of Related Companies expressed interest about becoming co-developers. Pérez said it could be a crowning achievement, signed a letter of intent, and pitched the Miami City Commission on a concept that would have boosted the hotel rooms from the initially planned 605 to 705, more than doubled the retail space to 500,000 square feet and added 100,000 square feet of convention space.

The Miami City Commission supported the plan, but some residents of Miami Beach complained about the traffic the project would generate along the causeway. The Miami Beach City Commission reacted by saying it would explore ways to fight the deal and maybe even file a lawsuit. After about two months, Pérez pulled out, saying friends had warned him he might face a lengthy approval process. Flagstone said it would go back to its original concept.

Environmentalists made a last-ditch stand to oppose the project in 2014, when Flagstone requested some modifications of the deed on the island, but the state cabinet approved it unanimously.

The construction of the marina and a $22.67 million mortgage from Demir-Halk Bank are now providing concrete evidence that the project is moving forward. The marina’s docks have massive pilings that go 25 to 35 feet into the ground under the water and tower overhead as you walk along the dock. The docks move up and down on rollers with the waves and the tide. The docks, which are like two prongs facing the turning basin used by cruise ships, are massive: A 550-foot mega-yacht could anchor on the outside while 180-foot vessels can fit inside.

Marieke Van Peer, who has deep industry connections from previous stints at the Miami Beach Marina and Bahia Mar in Fort Lauderdale, has been hired as manager of the marina. “There’s a real shortage for space for this sort of vessel,” Van Peer says. “Most of the marinas that can take them are older and they don’t have all the electrical needs. We’re juiced up to the eyeballs.”

Yachts will also be refueled and have their waste tanks pumped out in place, she says, adding that, “It’s not easy moving one of these yachts.”

Getting more slips for mega-yachts has been a priority for the region’s marine industry since a visit by one ship can generate hundreds of thousands of dollars of economic activity, ranging from fueling, provisioning, repairs and upgrades to spending by crew and passengers in stores and restaurants.

Van Peer is hiring about 15 people to operate the marina, ranging from a dockmaster, supervisors, dock hands, office staff and divers who help with mooring lines and anchors.

The marina’s floating docks will offer flexibility on configurations, such as whether ships are anchored parallel or tied up perpendicular, Van Peer says.

Site work and relocation of utilities will continue after the boat show and Bayraktar expects to start foundation work in the fall and complete the project by late 2018. He is also expecting to release the names of the flags for the two hotels and the European fashion company that will anchor the retail space.

HFF is making presentations to institutional investors and high net worth individuals to finance the project. Of the latter, Bayraktar says, “They may have a mega-yacht and totally understand what we are doing.”

Mega-yacht harbor: 50-slip harbor for yachts 80 to 550 feet with views of downtown Miami and cruise ships at PortMiami. A key selling point is the 18- to 21-foot draft depth and easy access to the Atlantic Ocean.

Hotels: Nearly 500 rooms and suites; one hotel is luxury-oriented and another is more trendy, lifestyle-oriented.

Fractional residential units: Owners of a unit will split maintenance costs and avoid the hassles of managing upkeep. The concept is widely used to share ownership of jets and yachts.

Shopping and dining: 221,000 square feet of boutiques, restaurants and cafes. The 10 to 12 restaurants are expected to have 2,000 seats indoors and outdoors with views of the water and downtown skyline.

Spa: The spa, rooftop gardens and pools will be nearly 120 feet above sea level.

Art and landscaping: Fairchild Tropical Botanic Garden will be engaged in the development of the horticultural features and artists José Bedia, Michele Oka Doner and Maria Martínez-Cañas will create works of art.