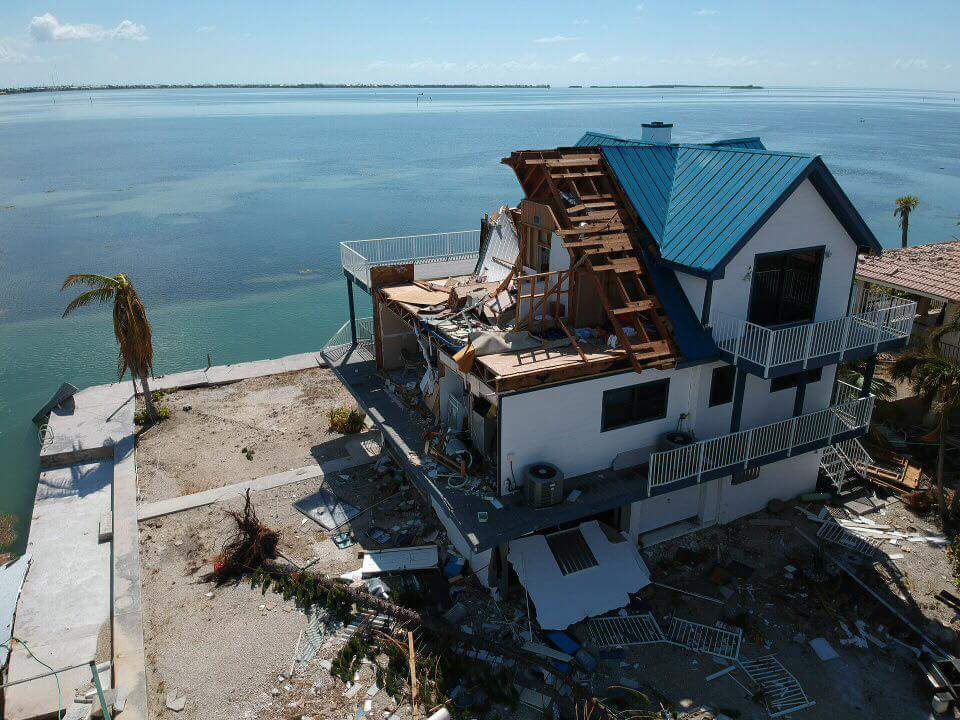 By Kevin Gale and Andrea Richard

Hurricane Irma is leaving a huge price tag in its wake with losses throughout the Southeastern United States that are estimated at $42.5 billion to $65 billion, according to CoreLogic, a property information company.

The economic impact has been estimated at $100 billion as businesses shut down for days due to lack of power, according to data compiled by Cushman and Wakefield. The closure of South Florida’s ports for four days resulted in $208 million in lost revenue per day.

The damages in Florida will probably total $50 billion, says Mark Vitner, managing director and senior economist for Wells Fargo Securities. “Business interruption is a much larger part of losses in this storm and there was more flood damage than we saw in most other major hurricanes that impacted the state.”

Insurance won’t come close to covering the tab. Residential flood losses are estimated at $25 billion, but only $5 billion to $8 billion is covered by insurance. Most of the $11 billion to $15 billion in residential wind loss is expected to be covered by private insurance.

The amount of devastation varied greatly in South Florida.

While water flooded the street level of Brickell Avenue, buildings were high enough to escape. Investigators will try to figure out why three construction cranes collapsed in Miami and Fort Lauderdale.

The marine industry was heavily hit. Yachts in Coconut Grove’s Dinner Key Marina were tossed around like toys, and boats were sunk in marinas downtown and on Watson Island.

Bob Roscioli, CEO and owner of Roscioli Yachting Center in Fort Lauderdale, says there was no damage at his boatyard in Fort Lauderdale. “It’s when you leave a boat by itself at a dock or in a yard, hurricane force winds can get ahold of it,” he says.

To avoid damage at his boatyard, Roscioli and his crew secured 106 boats with rope, tightly bundling them together. “Those boats all tied together became a mass, and it is hard for the winds to move that mass,” he says.

Over in the Keys, unfortunately, boats were destroyed., There, many structures also were washed away or heavily damaged. While many buildings built to post-Hurricane Andrew standards fared relatively well, Irma’s strong wind gusts and water surges damaged mobile homes and other older structures.

The hours following Irma, the region’s businesses had to gear-up rapidly to help their customers.

In Miami, insurance company Brown & Brown had a remote command center up and running less than 18 hours after the storm passed, says Executive Vice President Michael Gorham of the company’s Fort Lauderdale division.

“We had 15 dedicated employees that left their homes and families in order to take calls and claims of our clients for theirs. Our physical location in Fort Lauderdale was without power until late Tuesday night, however we were up and running by noon on Wednesday,” said he says.

Most of those with property insurance probably won’t hit the threshold for claims in urban South Florida, Gorham says. After Andrew, most deductibles went from $1,500 to 2 to 3 percent of total insured value.

From a market perspective, it appears the marine insurance industry as well as the National Flood Insurance Program will be hit the hardest from a claims standpoint, Gorham says. “With back to back major storms, the already beleaguered and broke NFIP will need full assistance from Congress to pay all the claims and re-fund the program for 2017 and 2018. The largest insurer of marine craft is the London market and by all accounts it appears they are going to be raising rates and deductibles significantly.”

Gorham is hearing that rates may increase 30 to 50 percent with high deductibles. Pricing power for marine insurance rates had been soft for seven years “and with all the storms this year hitting the islands and Florida, they will have no choice but to refill their coffers with higher rates,” Gorham says.

FLASH Restore set to work in a non-air-conditioned command center right after Irma and didn’t have power back until a week after the hurricane, said owner Donald Brodsky. It expanded service to include yard cleanup, limb and tree removal.

One urgent request for help came from the 211 Helpline, which also fields calls from 1-800-Suicide Hotline. 211 Helpline’s Sharon L’Herrou was trying to cope with a fourfold increase in normal inbound call volume while employees were working remotely because of flood and water damage.

“FLASH immediately mobilized a team to 211’s undisclosed secure location and began water extraction and the drying process. 211 Helpline was running business as normal, from their facility, within 24 hours,” Worth says. “FLASH felt blessed to have received the opportunity to help such an important organization and provided all services free of charge.”

The biggest tragedy in South Florida happened at the Rehabilitation Center at Hollywood Hills where 10 deaths occurred after the center lost power and temperatures inside spiked. Gov. Rick Scott announced new rules that require nursing homes and assisted-living facilities to have generators that can maintain comfortable conditions for at least 96 hours if power is lost.

Another assisted living and memory community, The Palace Gardens in Homestead, helped with relief efforts. It had a 25-employee caravan bring food and relief supplies to a staging area near Mile Marker 15 in the Florida Keys eight days after Irma.

“It’s important for us to help others in this time of need,” says Palace Gardens Executive Director

Zack Shaham. “Some of our employees are working on their first day off since Hurricane Irma but wanted to be part of this effort. We’ve experienced thedevastation when Hurricane Andrew hit both The Palace Gardens in Homestead and The Palace Kendall. We know how important it is to lend whatever support we can.”

Elizabeth Martinez, director of sales for The Palace Gardens, put the wheels in motion for the relief mission. And the Palace Coral Gables’ Executive Chef Ken Eubanks joined with Palace Gardens Sous Chef Orlando Casanova in planning the menu. Barbecue ribs, roasted chicken, yellow rice, macaroni and cheese, coleslaw and potato salad and corn on the cob were prepared and packed for serving. The group also brought nonperishable food to give to local chefs cooking in the Keys along with 1,000 cases of water donated from the 10 Palace communities.

In SFBW’s November issue, a further look at what happened to the region’s business community will be examined. Stay tuned.