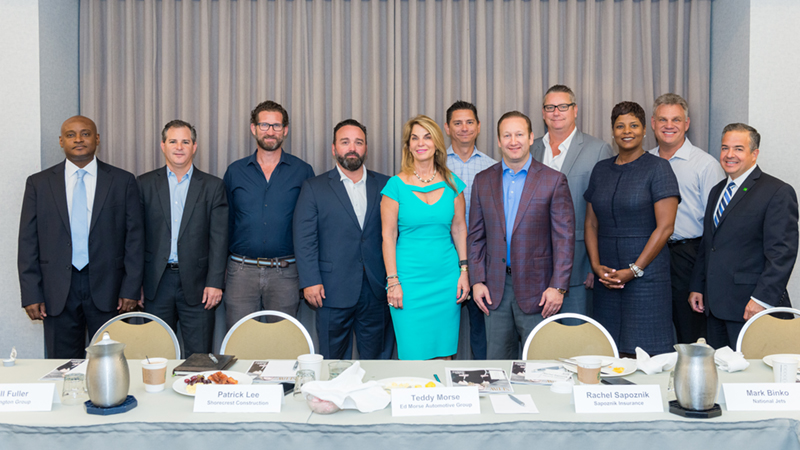 Periodically, the editorial team at SFBW arranges advisory board meetings for a chance to talk about the state of the region’s business climate. Over breakfast at the Westin Fort Lauderdale, 11 members from the advisory board discussed, with candor, what ails and achievements they have recently been experiencing. They described in detail what caused growth and slowdowns within their respective industries. The executives hail from banking, hospitality, aviation, technology, and the automotive sectors, among others.

While coming from different professions, they unanimously agreed that the rising costs of health care is a major concern and understanding what motives the younger workforce is a challenge.

In addition, millennial consumers have different purchasing habits says Edward J. “Teddy” Morse III, chairman and CEO of Ed Morse Automotive Group. “What we notice a lot is that the next generation really doesn’t care about getting their driver’s license,” Morse said. “I have friends who got kids who are 17, 18, 19 years old who don’t have their driver’s license.”

Over in the South Florida luxury condominium sector, sales have cooled in 2017. Patrick Lee, president of Shorecrest Construction, shared that clients are taking longer to buy. “Our typical client is a very high-net worth individual. While construction was booming in Miami in 2016, deals weren’t closing as fast—in 2016 even—people sat on the sidelines,” he said. “We tied it to the election. After the election, I thought 2017 was going off on a roar, but it hasn’t like I thought. People aren’t closing very fast. I’m expecting that to tip, for people to overcome the jitters, and begin to feel the need to move forward. There are signs of that happening.”

“I was going to say that the uncertainty of the tax reform, and interest rates going up, are hurting the high-end home buyer, for what we see on the banking side,” Pino said. “We are seeing the demand kind of flat this year. But as things are being defined and people are seeing where things stand on their taxes. Things will get better, so we are hoping it will pick up.”

However, Bob Birdsong, president of OK Generators, a generator supplier, says his business is booming. “I’m tied to the construction industry. And one of the really good economic indicators is the commercial construction. And it’s booming. We couldn’t be busier. All you have to do is look at Miami and see the cranes all over the place,” he said. “And we don’t see it ending anytime soon.”

Bill Fuller, co-founder and managing partner at urban development company Barlington Group, thinks prices are too high and unstainable. “From the real estate side, we believe that pricing is over heated—the condo market is starting to suffer greatly,” Fuller said. “Nine months ago, developers switched to multifamily, because that was the hot product. I believe we are going to see some challenges, not like the crisis before, but a real estate pull back. Look at Uber and what that means for parking garages. Banks’ real estate footprint is not like before. I remember when banks wanted to be on every corner.”

Yolanda Sheppard, Celebrity Cruises’ market sales manager, is seeing healthy growth. “Business as a whole has been great. We just launched our new ship that will be sailing in 2018, Celebrity Edge,” Sheppard said. “It’s our newest ship that we’ve launched in 10 years. It’s really bringing in the revenue from all walks of life. We touch all seven continents and reach 300 destinations.”

Matt Dernis, a managing member at financial advisory firm Fortune 360 Group, said business is good. “From potential tax policy to ACA, so what’s been popular is succession planning and business strategy—what you’ll see more of is consolidation. Mergers and acquisitions. So how do you approach that strategy? That sparks a lot of conversation.”

“Business is very good, which is causing other issues like finding talent. We are finding a lot of competition in the talent space,” she said. “Being on the employee benefits side of it, we are finding that creating a culture through our benefits that are allowing employees to know that we care about them and that they will make they want to stay the long haul.”

On recruitment, Mark Binko, vice president and chief operating officer of National Jets, prefers unconventional interviews. “Take them out of their comfort zone when you interview someone. I take them out to errands to have conversations with them to see how they interact. It’s a much longer process, but it gives you more insight in who you are dealing with and how they can handle themselves in certain situations,” he said. “Our biggest challenge, is that we are in an old industry. In an industry that used to be really sexy and exciting.”

“We are in the technology business. There is no hiring. There’s recruiting,” he said. “We are recruiting folks and are developing a position six months in advance.”

Regarding retention, Rufus James, Fort Lauderdale Executive Airport’s airport manager, has a unique approach. “What I learned working at the airport is to give my staff a sense of ownership,” James said. “No, it’s not my airport, but you are out there. I have been successful in keeping staff for a while. If by three years they are gone, I’m OK with that because they’ve learned a lot.”

Birdsong continued saying that, “It’s funny that I used to hire on ability and hoped that they had the right attitude, now I hire purely on attitude and hope I can teach them what I want them to know.” ♦