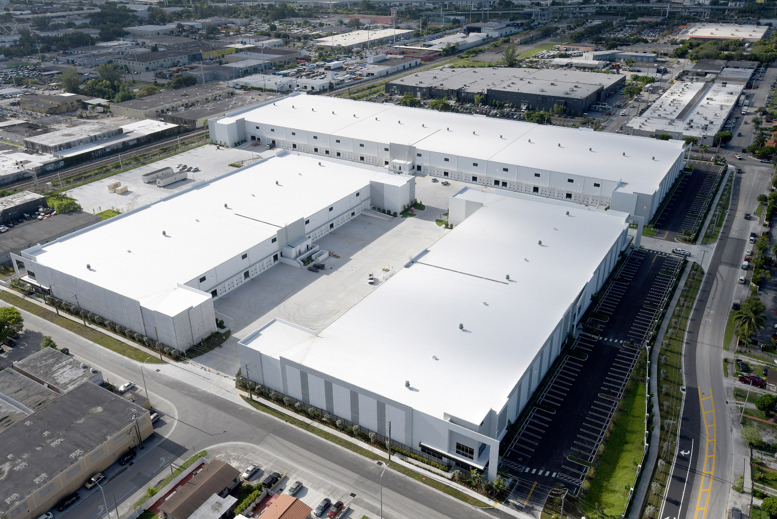 Miller Construction has been busy with several Miami projects. And now it’s proud to announce another completion in Miami-Dade County.

The Fort Lauderdale-based company announced that it has completed the simultaneous build of three industrial buildings at the 415,460-square-foot Miami Axis Park in Hialeah for owner Lincoln Property Company.

The company notes that completing all three structures required innovating scheduling and creating approaches while saving time and costs, especially since the park’s site plan makes highly efficient use of its 20-acre site at 725 SE Ninth Court, Hialeah, which meant limited space for staging and operations.

“Site work required bringing elevations to grade, with little space to store dirt,” says Miller president Brian Sudduth, “so we removed and stockpiled dirt offsite, then trucked it back to complete grading.”

Space limitations also dictated that pouring and lifting tilt-wall panels had to be done on the slabs and supplemental casting beds. To meet a 10-month structural timeline, Miller’s complex sequential scheduling kept the tilt crane moving and saved about two weeks. “We lifted 90 percent of panels on Building 100, then moved to Building 200 while the remaining panels were poured on Building 100’s slab, and so on, with all the project’s subcontractors tightly scheduled,” Sudduth added.

Miami Axis Park is Miller’s first project for Dallas-based Lincoln Property Company and included shell construction of the 212,760-square-foot Building 100, as well as 96,540-square-foot Building 200 and 106,160-square-foot Building 300. The site is bounded on the east by Florida East Coast Railroad property. With Building 100 located close to the boundary, Miller’s crews built one side of that building from the interior by double-lifting the panels using a process known as top-picking. This process was also utilized at the north side of Buildings 200 and 300 due to the proximity of the overhead power lines along SE 5th Street.