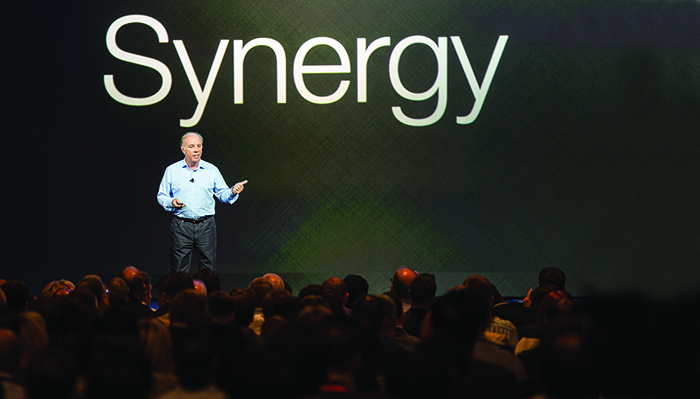 Citrix: Reboot for a Tech Titan

Citrix Systems is considered one of the nation’s top tech companies and its CEO routinely makes most-admired lists, but that doesn’t mean the path is easy for South Florida’s largest software business.

CEO Mark Templeton is leading the third major reorganization in the company’s history, complete with 700 layoffs and new members of the C-suite.  The stakes could be high with Citrix shares range bound over the past year and speculation that activist shareholders could emerge and call for a sale of assets.

Sitting in a conference room at Citrix headquarters, Templeton appears fully prepared to accept the challenges.

“Reinvention is not a new phenomenon to us. This will be our most difficult, because we are more complex than we were the last time. It probably takes a little longer. It will take an equal amount of energy and courage that we have demonstrated before to reinvent ourselves,” he says.

Templeton is under close scrutiny from investors. Shares fell 8 percent to $59.75 after a trading halt on April 9, when Citrix reduced guidance for the first quarter, but shares were trading near $67 after the company announced the actual results.

During the post-earnings call with analysts, Templeton at one point said the company wouldn’t address rumors about spinoffs, but later said, “The answer is that we feel better than ever, actually, about the portfolio and the rationality of how all of these pieces fit together.”

A simple way of looking at Citrix is that it provides the glue that helps devices and software stay connected – the need for which has exploded with the Internet of Things (IoT) and bring your own device to work (BYOD). All of this technology allows people to be productive while they are on the move.

As Citrix COO and CFO David Henshall says, “Work is not a place. It is something you do.”

Templeton says Citrix has reframed its strategy to reflect how software is defining the workplace as being more digital, more virtual and more flexible.

The reorganization has created three business units rather than a model based on customer types, such as small business vs. enterprise. The reorganization gives Citrix a chance to make sure the company has the correct alignment and shifts resources away from areas with excess capacity, Templeton says.

Henshall has played a key role in the company’s success, even serving as acting CEO after Templeton took a leave of absence after the death of his son.

Henshall says he was attracted from Silicon Valley 12 years ago when Citrix was evolving from a one-product company into adjacent products, which would allow the creation of value for employees, shareholders and partners.

“Mark is one of the reasons I love Citrix,” Henshall says. “He is the most authentic and genuine person. He has a passion for technology and a passion for Citrix. The passion is infectious. It makes things exciting and fun.”

Glassdoor.com in 2013 rated Templeton its No. 12-rated CEO and he recently had an 85 percent approval rating on the website, which is based on employee feedback.

While Fort Lauderdale continues to be the company’s largest employment center at 1,800 employees, the three major business units of mobility applications, workplace services and delivery networks are all based in California, with its abundance of tech talent.

“He’s an expert in going to market for small business customers and selling direct over the web,” Templeton says. Mobility apps is based in Santa Barbara, Calif., but has far flung operations in places such as Raleigh, NC and Karlsruhe, Germany, which is home to the German equivalent of MIT.

One sign of how well-regarded Hylen is: He just joined the board of Boca Raton-based ADT in January.

Ramleth’s value becomes further apparent when you consider that Citrix also acquired Octoblu, where Ramleth was a co-founder and CEO. Octoblu has been heralded as a company that enables machine-to-machine network communications. The most splashy use, shown in a YouTube video, allows drones to communicate with each other.

Octoblu used to be known as Skynet – named after the self-aware artificial intelligence system in the “Terminator” series of movies.

With Octoblu, devices get a unique 36-character identifier and can communicate with other devices that speak the language across different types of protocols and platforms, according to news media accounts.

This type of technology in general will play a key role in IOT, which ranges from the drone transportation of packages envisioned by Amazon to home automation systems such as Nest.

Citrix has gained not only Ramleth and Octoblu, but Chris Mattieu, Octoblu’s CTO and other cofounder. He’s now director of IoT Engineering at Citrix.

In contrast to newcomers Hylen and Ramleth, the leader of delivery networking is Senior VP and GM Klaus Oestermann, who has had a similar position for eight years and been with Citrix for 15 years.

The core of delivery networking is Citrix Netscaler, which is used by thousands of customers to deliver cloud and enterprise services, including via mobile devices. Netscaler was recently heralded as the only application delivery product that fully integrates into Cisco’s unified fabric – a next generation data center for scalable virtualization, seamless workload mobility and cloud computing.

Templeton describes Oestermann as “commercially savvy” and tells how he went from running the Nordic sales region for Citrix, to a staff role in the U.S. for channel marketing and development and running Citrix sales in the western U.S.

It may be no coincidence that Oestermann has been joined by newcomers with broad experience, one tech recruiter says.

Times of restructuring can be ideal to attract top-level talent into a company, because they know they can have an immediate major impact, says Mitch Kramer, CEO of Octagon Professional Recruiting & Octagon Staffing. “If you go into a company like Citrix in a normal course of business, it’s hard to influence change as quickly and significantly as when the company is at an inflection point of where they are and want to go to be competitive and increase market share.” ?

The Citrix back story

Citrix started with a vision by co-founder Ed Iacobucci.

Back in 1989, Boca Raton was a major center for IBM as the birthplace of its PC, while Iacobucci led the team that created OS/2 – the operating software being developed by IBM and Microsoft as a successor to DOS.

Iacobucci recognized the need for software that would allow multiple, inexpensive computers to access software programs on a central server running OS/2 rather than having it all loaded onto each PC. Businesses would save money and have an easier time operating networks.

According to media accounts, Iacobucci ventured on his own after IBM and Microsoft didn’t jump on his vision.

“Ed brought a lot of technical talent and the team from IBM, but also the relationships that allowed the company to probably be the only company in history to have a license to the source code of every Windows operating system through NT 4,” Citrix CEO Mark Templeton says.

Citrix was originally called Citrus Systems, but a trademark challenge sparked the new name, which was derived from Citrus and Unix, a programming language. While the company launched in Richardson, Texas, it quickly moved to Coral Springs, where Iacobucci was joined by five other former IBM engineers.

Templeton joined the company as vice president of marketing in 1995, just before Citrix went public and a year before it moved its headquarters to 6400 W. Cypress Creek Road.

“It was like a lot of startups start ups are – a rag tag crew of dreamers. Everyone wore multiple hats,” Templeton remembers. “Like most teams, it’s like putting a jigsaw puzzle together. When you put it together as a whole, we were quite a good team.”

Roger Roberts, who had worked at Texas Instruments, was the CEO and president while Iacobucci was chief technical officer. Templeton says hiring a CEO was a condition by the original investment group that included Kleiner Perkins and Sevin Rosen Funds.

Citrix’s first product was Multiuser, which was based on OS/2 and could run DOS, Windows and OS/2 apps. When OS/2 didn’t take off, Citrix did a pivot and in 1995 released a Multiuser version of Windows NT.

Citrix subsequently survived a challenge in 1997 when Microsoft said it would develop its own multiuser version of NT 4.  Instead, the companies negotiated further and Microsoft bundled Citrix’s offering into its Windows NT software. Citrix received a $75 million initial fee as part of a 30-month agreement.

What’s the relationship like these days? “We both have a self interest in, as opposed to the way it used to get interpreted – that we loved them more than they loved us,” Templeton says

In 2002, both sides agreed to the mathematics of the revenue synergies under a licensing deal – for every dollar Citrix pulls in, it pulls along 75 cents of revenue for Microsoft.

“We are bearing the cost of sale driving their dollar,” Templeton says.

A history of acquisitions

Citrix has also been fueled by more than 40 notable acquisitions.

These days, Citrix has a lineup of products that are widely marketed to business consumers, including Sharefile, GoToMeeting, GoToWebinar and Podio, a project management software.

The company recently announced it would acquire Grasshopper, which allows businesses to set up phone systems in the cloud with features including toll-free numbers, voicemail and forwarding to mobile numbers.

Another major evolution for Citrix came in 2005 when it paid roughly $300 million for its biggest acquisition, Netscaler

“We believed very firmly that every modern software company would have to have a competency delivering software as a service [SAAS],” Templeton says.

That gave Citrix a big toehold not only in Silicon Valley, but in Bangalore, India, since NetScaler was founded by entrepreneurs from India.

Citrix’s moves have helped it deal with the rise of smart phones and tablets. One of the reasons for the company’s success is that it is device and application agnostic, Templeton says.

Similar to how Netflix aggregates a wide variety of entertainment titles, Citrix offers a reliable service delivered over any network to any device, Templeton says. Similar to how Netflix has developed “House of Cards” and “Orange is the New Black,” Citrix is developing its own mobility apps. Citrix’s Xenmobile includes WorxMail, WorxNotes, WorxWeb and integrates with GoToMeeting and Sharefile.

The whole system is designed to be highly secure. “Companies are finding out that they have underinvested in security competencies, both on the physical side as well as the digital,” Templeton says.

Using one more comparison, Templeton says Citrix has to act like Amazon in packaging and shipping securely.

Citrix has an array of brands hat have broadened its offerings to customers:

Remote access to your PC and work network – works with mobile devices, too

Connects devices across multiple protocols and allows analysis of data

Project and team management that integrates with file sharing services