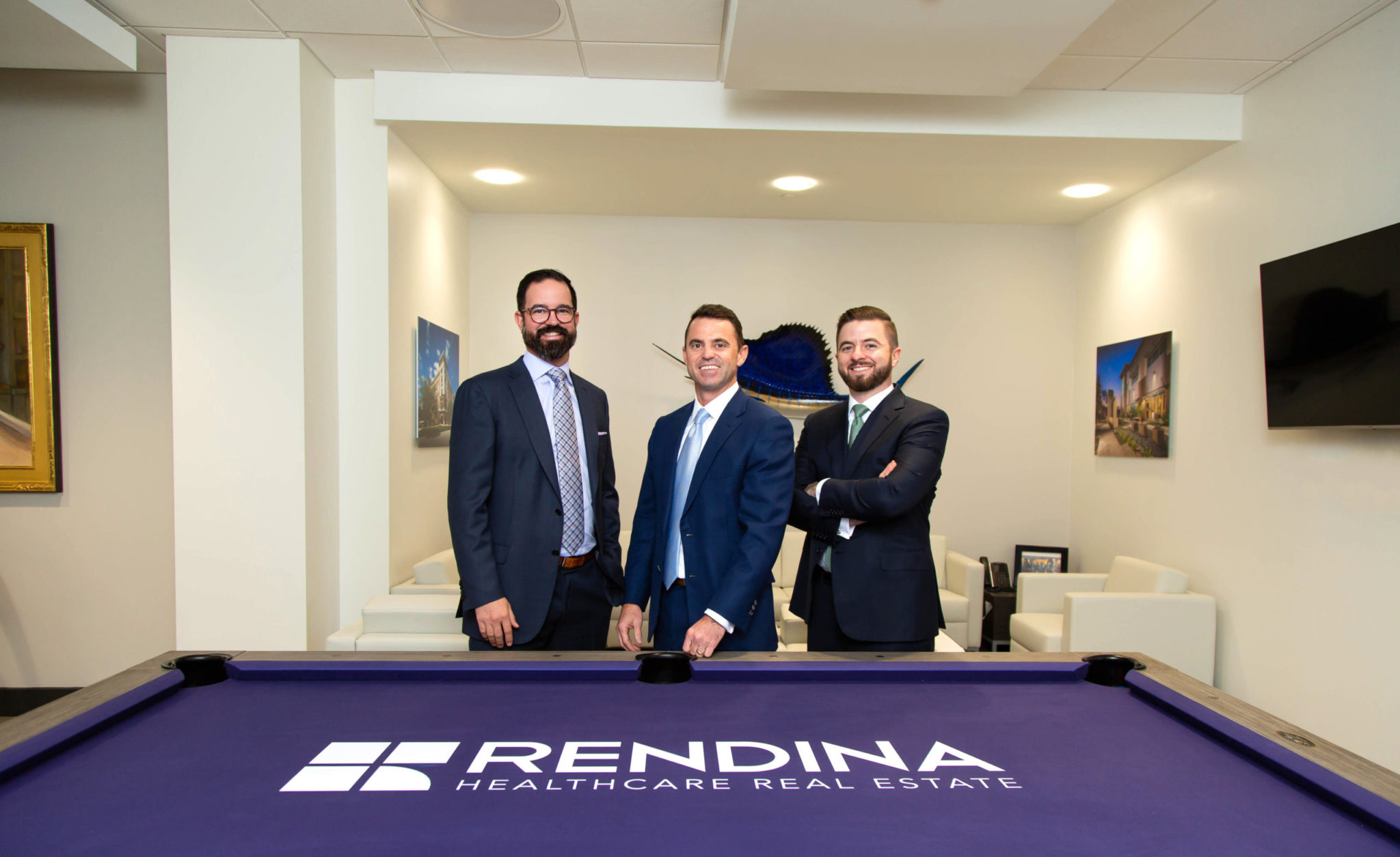 Straight to the Heart

Rendina Healthcare Real Estate has always been about much more than the bottom line—derived from its portfolio of medical office buildings it manages, acquires, develops or leases. Philanthropy long has played a large role to the firm’s three brothers. Most years that includes employee-led efforts to support local organizations, sometimes preparing holiday meals for the less fortunate, writing letters to military members, and raising money to support clinics and cancer support centers.

Hoping to align with an institutional equity partner that can help expand its mission, the Jupiter-based company rolled out a joint venture offering in February with the intent of putting $300 million in equity to work over a three-year investment horizon. “We are one of the only health care real estate developers in the country that is not aligned with institutional capital on a programmatic basis, so we definitely feel like we will be the belle of the ball,” explains chairman and CEO Richard Rendina. “We are also planning to do our first Friends & Family General Partner Equity Fund to the tune of $15 to $20 million.”

These major milestones are especially significant for a company that has seen its share of seismic shifts in recent years, starting with the death of Richard’s father, Bruce, to cancer in 2006 and including Richard’s own diagnosis—of non-Hodgkin’s lymphoma—in 2011. Bruce founded the Rendina Cos. in 1998 and grew it into one of the country’s leading full-service health care real estate development firms, hoping his three boys would someday take over. Today, Richard’s brother, Michael, is vice chairman and chief investment officer and David is the executive vice president of development and acquisitions. And while the trio grew up learning the business by working in all its various departments, none truly considered someday running Rendina Healthcare Real Estate—especially in so sudden a fashion.

The brothers’ journey began in 2004 when Bruce convinced Richard (he’s the oldest), who’d graduated from the University of Notre Dame two years prior, to leave Wall Street and return to Florida. The unthinkable happened a year later. “Once I found out he was sick with a malignant brain tumor in August 2005, I tried to shadow him as much as possible,” he recalls.

“Rich’s last week in New York was my first week there working at Lehman Brothers,” says Michael, who had graduated in 2005 from Florida State University with a real estate and finance degree. “But I moved back home in August to take care of my dad.” David, the youngest of the boys, was just starting his freshman year at FSU.

Bruce had plans to sell the entire portfolio and its property management division the summer before he passed, but Richard recalls, “Dad gave us a choice of whether we wanted to take it over or sell it. We told him we wanted to carry on his legacy.” The siblings had to quickly find their footing. “Dad had big shoes to fill.”

Michael adds: “Richard knew he had to step up as CEO, but it took me and David awhile to figure out what our roles were. We’re all uniquely good at certain things.” Fortunately, they had it all worked out before the 2008 recession hit, and, in 2014, David led the charge to change the company’s name and its destiny. “We went through a process and got the whole company involved to identify a new mission statement and core values. We knew if the company was going to survive, we had to have buy-in from the employees,” he remembers.

The Rendina Brothers’ ABCs of Giving

A) Choose a cause that you’re passionate about.

B) Make your fundraising efforts a celebration.

Gather your family, friends and colleagues in a celebration of the cause. Inspire others to get involved.

C) Focus on quality, not quantity.

Focus on one, two or maybe a few charities. Don’t spread yourself too thinly, and you will make a more meaningful impact.

Feel the impact you can make in the lives of others by seeing it first-hand.

E) Make a connection with the beneficiaries.

Making a human connection with those directly impacted is the most rewarding part of the process.

Fast forward to August 2020, when Modern Healthcare named the company one of its Best Places to Work in Healthcare for the second straight year, based on employee surveys. “The reason we won is our people and our culture,” David says. Part of that culture includes Rendina Cares, an employee-run program designed to help local organizations through volunteerism and philanthropy. Its current projects involve the renovation of a local high school and working with Jupiter Medical Center to support an outpost of MyClinic, a free clinic that helps severely impoverished adults and children without insurance. To date the group has donated more than $1 million.

Richard, who was just appointed to the national board of the Leukemia & Lymphoma Society, says a good number of his 60 co-workers are not just writing checks—they’re volunteering time: “We always look to hire people who want to be a part of something bigger.”

The Rendina Family Foundation, which Bruce and his wife, Marji, founded nearly a decade before he died, also continues to flourish, donating nearly $6 million to various hospitals, thanks in part to its annual golf tournament and donors. In deference to their father, the brothers decided to turn the foundation’s focus exclusively toward cancer research when they took the reins.

The brothers have had a lot to contend with as they have developed more than 2 million square feet nationwide, including the new 73,000-square-foot Cleveland Clinic Coral Springs Family Health Center: “It’s a one-stop shop,” Richard says of the $53 million joint venture. “Patients can see their primary care physician and specialists, have a surgery in the same place and their followup care. It’s Cleveland Clinic’s first and only outpatient facility with a third-party developer.”

As for the future, Michael is bullish, “We’ve got roughly 500,000 square feet of development breaking ground: three projects in New Jersey, two in Tennessee, one in New York, three in Florida and one in Arkansas. 2021 is going to be a banner year for us.” (Historically, Rendina develops nearly half of that square footage annually.) David adds, “And we’re projecting 360,000 square feet in acquisitions.” With a suitable institutional equity partner, those numbers undoubtedly will multiply quickly—for all the right reasons.

“We’re fortunate to be in a business that makes people’s lives better. Our clients and tenants provide access to high quality health care,” Richard says. “Being a cancer survivor myself and after losing my father to cancer, it was a reminder of the real magic behind the walls of the buildings our company develops.”