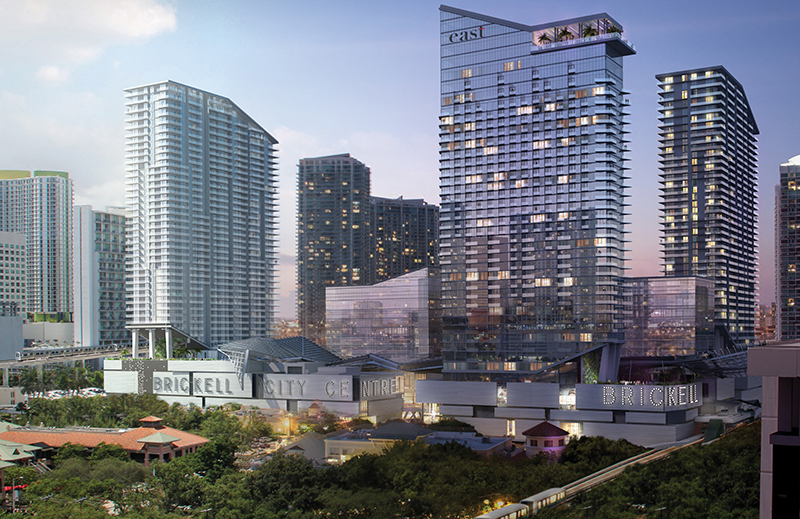 Seeing renderings of the Climate Ribbon at Brickell City Centre is one thing, but seeing it in person on a hard-hat tour is something else. SFBW was part of the first group of journalists to see the $1.05 billion project, which just two years after breaking ground, is rapidly nearing completion.

If I had to pick one word to describe City Centre, it would be “mammoth.” The Climate Ribbon, arguably the complex’s most notable feature, soars several stories above the promenades with graceful curves. It’s hard to understand the size of the ribbon’s panels until you see one on the ground and realize it resembles the wing of a midsized jet.

We saw the east end of the ribbon, which has a scoop to pick up the prevailing breeze from Biscayne Bay. The ribbon will help direct the breeze downward to cool pedestrians on the promenades that connect the center’s buildings. It will also harvest rainwater with the goal of helping Brickell City Centre earn LEED designation. Our tour guide, Christopher Gandolfo, senior VP of Swire Properties, said cisterns the size of swimming pools will store the water, which will be used for irrigation.

The sprawling center is, in essence, a city within a city that will provide everything from a Saks Fifth Avenue, a Cinemax Theater and restaurants, to condos and a hotel. In a market that has seen little office construction since the Great Recession, Brickell City Centre will add 260,000 square feet.

Our tour started on the east side, where visitors can arrive via an attached Metromover station. One of our first stops was in the east tower, where we entered into a park-like plaza with trees and panorama views of the skyscrapers along Brickell Avenue and Biscayne Bay. We could see Brickell Key, which was Swire Properties” earlier $1 billion Miami project. On the opposite side, we could see the Miami River and Marlins Stadium in the distance.

The construction crews were actively working as our group moved through. Some were using scissor lifts to install fittings in the ceiling, others were working on HVAC ducts, and at least one worker was on a boom that stretched up a couple of floors to the Climate Ribbon. Construction elevators rattled up and down the sides of the buildings.

Gandolfo took us to the third floor to what he called the “knuckle area,” where the promenades flowing east/west and north/south will connect. The area will have granite pavers and looks like it could easily hold a thousand people for public events. Cars whizzed through the middle of the project on Miami Avenue as we walked overhead.

There were sweeping views between levels with escalators that crisscross in dramatic fashion. The center will have 42 escalators and 52 elevators, Gandolfo said. Some of them will go down below street level, since 1,600 of the parking spaces are below grade.

When asked about traffic, Gandolfo said the Florida Department of Transportation is looking at how the Seventh Street ramps to I-95 might be improved to help traffic flow in the neighborhood. Brickell City Centre is hardly the only traffic generator; three towers are under construction just south of the tower alone.

We stopped again on the retail level as Gandolfo pointed toward an area where the curtain wall for Saks Fifth Avenue will be. It was stark-gray concrete during our tour, but Saks will soon create 180,000 square feet of retail paradise.

As impressive as our tour was, there’s even more to come. The Federal Aviation Administration recently approved the 80-story One Brickell Centre Tower, which will eventually be the eastern entrance to the city within a city. The tower would add even more office, hotel, condo and retail space.

If it existed today, One Brickell’s 1,040-foot height would make it the tallest building in the U.S. outside of New York City and Chicago.

Developer: Swire Properties Inc., the U.S. subsidiary of Swire Pacific Holdings Ltd., which is headquartered in London and Hong Kong

Schedule: June 2012 groundbreaking with first phase expected to be complete by year’s end

Jobs: 2,500 jobs while under construction and approximately 3,700
after completion