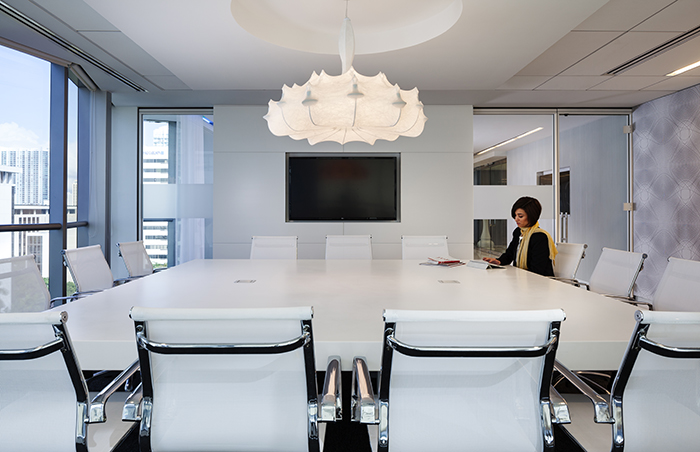 At first glance, it appears that Pipeline is in the business of renting short-term, high-design shared office spaces to individuals and companies in South Florida and Philadelphia. But Philippe Houdard says he and Todd Oretsky created Pipeline to offer much more: spaces where people can find community and connections at work.

Houdard, the founder and former CEO of SkyBank Financial, an electronic payment processing company based in Miami, and Oretsky, an attorney and member of the board of advisors to Florida International University’s Pino Global Entrepreneurship Center, created their first Pipeline property in 2012 on Brickell Avenue; the space was meant to be shared by a diverse community of entrepreneurs, startups, independent professionals and small corporate teams. In 2014, they opened a Pipeline in Philadelphia, followed by a Coral Gables location in 2015. In April, a Doral location opened, and this summer, they expect to open in downtown Fort Lauderdale.

Pipelines have members (not tenants), and those who have signed on locally include Google, Uber, HBO, Telenovela, Microsoft, the Knight Foundation and IBM, Houdard says, noting that companies of this size typically lease space short term while waiting for offices to be built, for specific projects or while in a staff growth phase. Each Pipeline location has 100 to 150 business members.

“We’re really in hospitality, not real estate,” Houdard says. “The concept for Pipeline is part of a national trend: Our world seems to have grown smaller as we have become disconnected from our neighbors and community. And there is a real human need to connect. Pipeline gives people access to others on a daily basis when they might not otherwise have it.”

The need for interaction and perspective-sharing is especially acute for those who work independently – whether or not they are connected to a larger company, Houdard says, adding that the opportunity to network in an unforced setting at Pipeline is also valuable. For startups, the interaction and opportunity to brainstorm with other businesses in diverse industries is also important.

Amenities that foster collaboration among Pipeline’s members include common areas such as cafes, large event spaces, living rooms, phone booths (for calls requiring privacy) and technologically advanced conference rooms in various sizes. There also are several monthly events held at each location that feature speakers or are holiday-themed.

Pipeline locations offer additional amenities important to businesses, Houdard says, including close proximity to city centers and easy access to coffee shops, restaurants and other companies – all of which facilitate convenient meetings with customers and vendors.

Office leases, which range in price from $650 to $3,000 per month, are generally taken for a year, but also are available for as little as three months. For $199 per month, individuals can have access to Pipeline’s flex-spaces – tables in the open with Wi-Fi and charging facilities that provide the opportunity to work alongside others rather than individually. This also includes access to Pipeline’s social spaces and events.

“The Garden” at Pipeline Brickell

“People don’t just come in and out of Pipeline; they have a sense of community. It’s about creating connections, which creates value from the experience,” Houdard says. “When you work at the headquarters of a large company, it’s easy to find motivation if your offices are designed to provide it. But to be a small business in isolation is difficult. We all appreciate the opportunity to get motivated, get validated, and bounce ideas off others.” ↵

A private room at Pipeline Doral

A workspace at Pipeline Coral Gables

• Pipeline Brickell is designed with the philosophy of color therapy, with natural lighting, yellow furniture accessories and tropical views. The office features two all-white conference rooms, an event space and a social lounge known as the “The Garden,” an area with garden walls, hanging chairs and writable walls where members can gather to exchange ideas.

• Pipeline Coral Gables reflects the architectural influences of the area with Mediterranean-style design elements and Spanish-inspired accent pieces, such as a coat of arms, a bull’s head and a candelabra. Green is the central color, representing the lush tropical canopy that characterizes the historic city.

• Pipeline Doral is inspired by elements of Doral’s past and future. The shared workspace features a cafe that resembles a cargo container and an old-school music room where members can stimulate their minds with a selection of vinyl records and spin tables.

• Pipeline Fort Lauderdale embraces the city’s proximity to the ocean, its love for aquatic activities and its beach culture. Water is incorporated into the space’s design, representing one of the most important natural elements in the city.