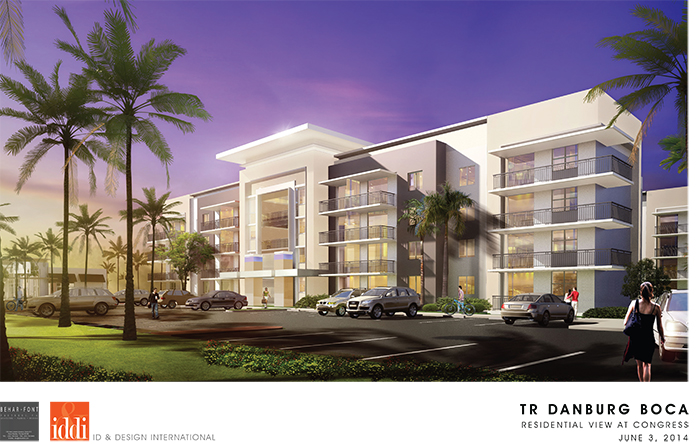 Suburban office parks are the poster children for urban sprawl, but South Florida is joining a national movement that seeks to address the issue.

The New York Times and The Wall Street Journal have written about dozens of office parks throughout the U.S. that are getting makeovers and turning into the live, work and play centers that are all the rage in downtown areas.

The Arvida Park of Commerce in Boca Raton is being reborn as the Park at Broken Sound with 1,463 residential units and accompanying retail spaces.

A big plus for the residential developers is the park’s winding streets, mature tree canopies and buildings that are set back from the street. Some of the office buildings overlook the Broken Sound Club, which annually hosts the PGA’s Allianz Championship.

The park and its surrounding area are already home to major companies, most notably the headquarters for Office Depot (NYSE: ODP) and ADT Corp. (NYSE: ADT), which is right by the entry road to the golf club.

The 5.2 million-square-foot office park constitutes 22 percent of the total office space in Palm Beach County. The vacancy rate is estimated as being in the low teens.

Many of the buildings in the park date back to the 1980s and are ripe for renovations into modern workplaces that emphasize collaborative workspaces rather than cubes.

Birth of a park

The Arvida Park of Commerce was established in 1978 with 850 acres owned by master developer Arvida Corp. (It shrank when the golf club was carved out.) Much of the park’s growth was propelled by IBM, which later developed the personal computer in the city.

Arvida was acquired by Disney in 1984, and the park was sold to Tishman Speyer. It currently has about 66 property owners and is managed by Irongate Real Estate Management.

The upcoming changes are possible because Boca Raton redesignated the park from light industrial property to a mobility land-use category, which allows multiple complementary uses, says Brian Schmier of Schmier & Feurring Properties. His father was one of the original developers at the park and he’s developing one of the new residential projects.

The mobility theory is that people won’t have to drive so far to work, shop and eat if the uses are in close proximity.

The park is already connected to mass transit by a city shuttle service that connects to the Tri-Rail station at Yamato Road, the commuter line’s busiest station.

“People are getting off in droves because we created an employment center here in Boca Raton,” Mayor Susan Haynie says.

Three residential projects have been announced and two more are seeking approval.

Schmier says he expects more projects over the next two to five years in the park, whether they are retail spaces or new offices.

Keith O�Donnell, a principal with commercial real estate company Avison Young, says some properties in the park aren’t the right size, so creativity will be needed. That could include combining buildings, performing renovations or doing demolitions. ?

Main Street Capital and Codina Partners: 370 residential units on the former 26-acre Siemens Nokia campus on Broken Sound Parkway, which Main Street bought for $37 million in 2007. Main Street says there is 17.2 acres of land that could accommodate up to 480,000 square feet of office or high-tech space.

TR Danburg: Seeking city approval for 282 apartments with a resort pool, clubhouse, fitness center and an 11,000-square-foot community shopping center. The location is at the southeast corner of Congress Avenue and Clint Moore Road.

Liberty Property: Seeking approval for 322 units on a 22.4-acre site near West Yamato Road and Park of Commerce Boulevard, where it already has two office buildings.

If the signage at the Park at Broken Sound looks like it has a retail touch, there’s a logical reason. The conceptual work on the redesign was performed by ID & Design International (IDDI), a Fort Lauderdale company that is internationally known for its retail projects. Its clients include Macy’s and Whole Foods. IDDI has also done malls in Asia and iPic Theaters.

IDDI President and CEO Sherif Ayad chose a leaf as the major symbol in the park’s logo. It was inspired by the greenery and setbacks he saw when driving through the park. “This is one of the only corporate parks I drive through that I say I wish I could live here,” Ayad says. The leaf represents playfulness without being stuck in a particular time period.

The new color palette in the park will play up wood tones with grays, whites and greens. Major intersections will have 90-foot-long signs, but they will break down into smaller segments. Banners on streetlight poles will be used to promote community events.

Bonnie Kaye, chief strategist for marketing the park, says the Arvida Park of Commerce never had a website or social media, but this one will have #parkatbrokensound and #perfectaddressboca for its hashtags and website.