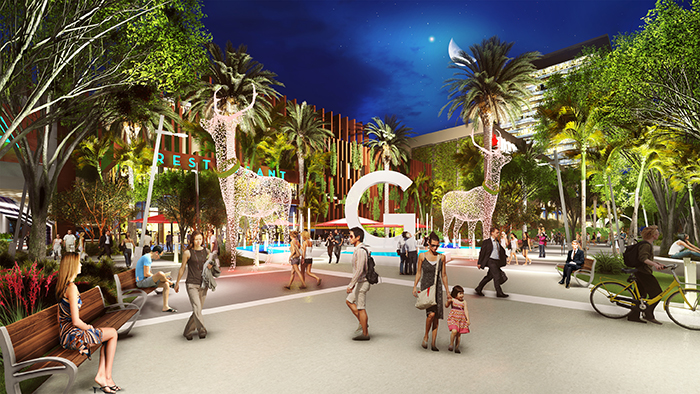 The Greening of the Mall

The Galleria at Fort Lauderdale is not only adding residential towers, but it’s creating eight acres of park-like space, which builds on a lifestyle movement that started with the addition of restaurants and a food court in 2004. The mall will become much more approachable to pedestrians with about 20 new locations for restaurants and shops.

The green spaces will include gardens, ponds and fountains that use captured rainwater in addition to a 1-acre rooftop area that could be programmed for community activities. “Think of the Highline and, now, the Lowline,” says project developer Peter Flotz of Lansing Melbourne Group, referring to Manhattan’s Highline park, which was built on abandoned elevated train tracks, and the plans for an underground park in a Lower East Side trolley terminal.

One of the major public spaces planned at the Galleria is the size of a football field and will face Sunrise Boulevard where Bayview Drive runs through the mall. Currently, it’s just a strip of asphalt parking. Another plaza-like area will be in front of the former Saks Fifth Avenue space on the east side of the mall. A community garden with public art and a dog park will go behind Macy’s.

A wetlands area on the southwest corner of the mall will have plants to help filter runoff water. Cisterns are also planned to capture water for pools and irrigation, while 14 injection wells will pump runoff into the aquifer to help recharge it and fight saltwater intrusion.

The U.S. Green Building Council has accepted the Galleria’s application to be a LEED for Neighborhood Development project – one of the first in Florida. These communities are designed to be more sustainable and pedestrian-friendly with eco-friendly buildings and park spaces.

“I take a real stewardship approach to this stuff. The land will be here after I’m gone,” says Flotz, who is working with the mall’s owner, Keystone-Florida Property Holding. He talked about the redevelopment in the March 2015 issue of SFBW, but gave an update in late December on tweaked plans, which followed feedback from dozens of community outreach meetings. For example, plans for office space were dropped. “For everyone who liked it, another 100 didn’t,” Flotz says. The market was also lukewarm for a hotel tower, so that’s gone, too.

The feedback did favor upscale senior living, which resulted in plans for two low-rise towers on the south side of the mall that could attract an operator like Hyatt’s Vi assisted living brand. “The demographic train is huge,” Flotz says. “There are 10,000 people a day turning 65 in the U.S., and Florida is the second fastest-growing state in the country.”

The rental tower east of the mall, once the site of a movie theater, has been cut from 45 to 38 stories after feedback from neighbors about it’s appearance on the skyline. Flotz envisions three restaurants and a gourmet market in the tower.

A cutting-edge movie theater chain is interested in taking over the former Lord & Taylor space.

“There are 10,000 people a day turning 65 in the U.S., and Florida is the second fastest-growing state in the country.”

Getting luxury anchors to complement Neiman Marcus is a challenge for the mall, due to the demographics of its market-area radius, Flotz says. While there are wealthy communities near the Galleria, a lot of its surroundings are either ocean or less affluent neighborhoods. That’s a reason Nordstrom turned down the mall, he says, though he’s getting an uptick of interest in luxury retailers as a result of the new plans.

Flotz still has an array of city and county approvals to go through, but he hopes to be in position to break ground on the 10-year project by the end of this year. The first phase would include the east tower and the park-like areas, while subsequent phases would include the senior buildings and a condo complex on top of Neiman Marcus.

The rental tower will have top-of-the-market leasing rates, Flotz says, but notes, “We’re the only ones who can offer coastal living that’s not $2 million and up.”

The parent of the owner of the mall, the Pennsylvania State Employees’ Retirement System, has the first right of refusal to purchase the buildings when they are done, he says.