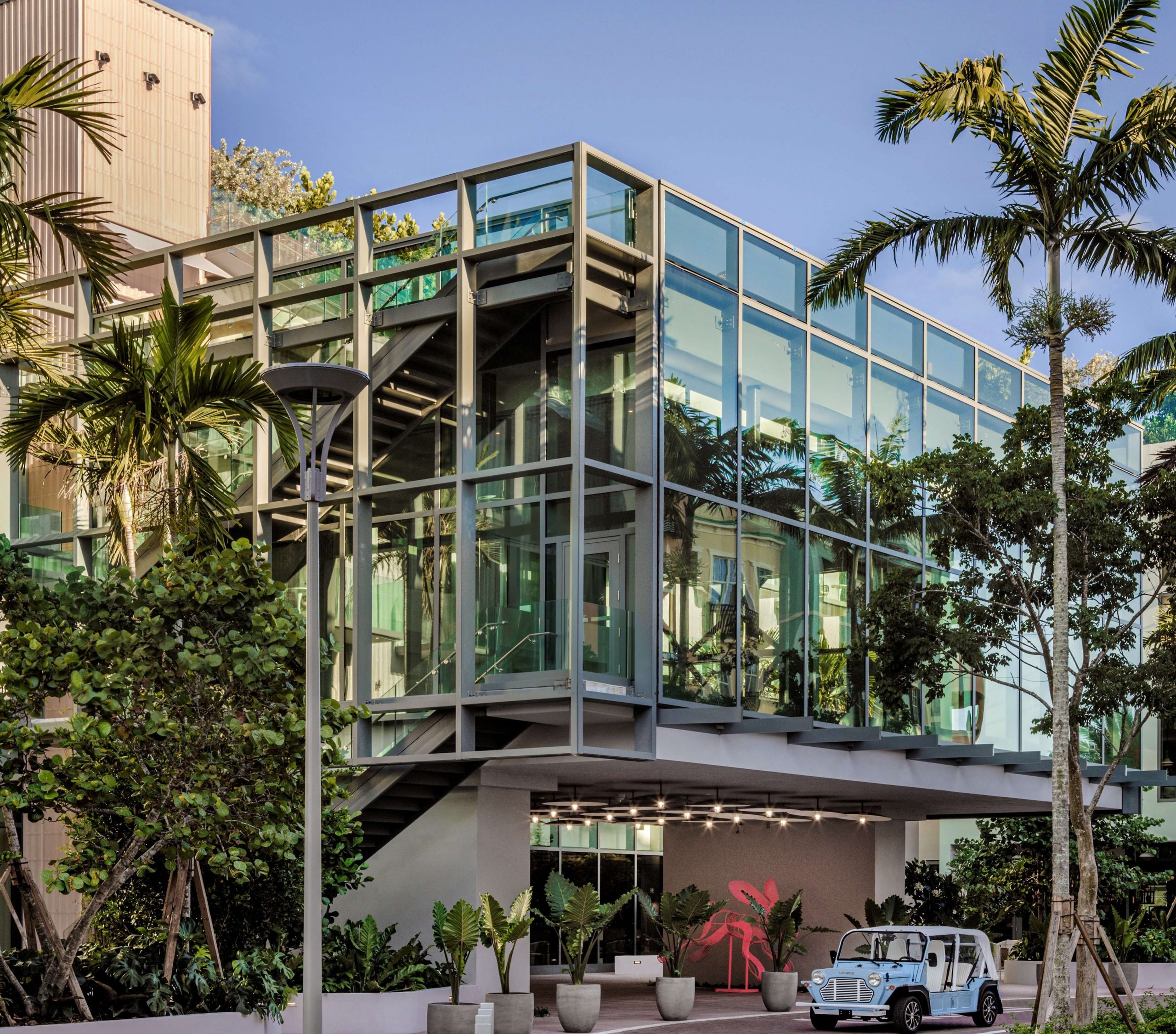 The Ray Hotel in Delray Beach Confronts the Rulebook

For the new hotel hotspot, city ordinances—whether adhered to or changed—inspired the innovative design by architect Jose Gonzalez

Delray Beach is on the move, in large part because of the efforts of Menin Development, specifically CEO Craig Menin, and Jordana Jarjura, president and general counsel. Jarjura’s influence is nothing if not tangible, as the former vice mayor of Delray Beach was singlehandedly responsible for adding tropical modern design to the list of approved architecture styles in the city.

Her experience on the Delray Beach Planning and Zoning Board made her keenly aware of the statement that architecture can make, so when visitors and locals approach the 141-room Ray, Menin Development’s latest hotel, and gaze upon the Cube, the glass design feature that rests out front, they know that something innovative is happening to the quiet beach town.

The Ray’s architect, Jose Gonzalez, founder of Gonzalez Architects in Miami, conceived and executed the Cube as a 53-foot-by-32-foot-by- 15-foot practical sculpture. “I still remember the day I came up with that,” he says. “This was a very difficult site in the sense that there are two levels of parking underneath that building, from property line to property line, so I had to solve the problem of building on top of that and managing the structure, punching down to the parking garage and still working with rooms up above. It was a bit of a Rubik’s Cube. In laying out the rooms, I wanted to maximize the exposure of the rooms to views.”

The fact that Delray Beach has an ordinance mandating courtyards (“boring,” the architect says), caused Gonzalez to get inventive by merging the required event space with “a really dynamic architectural feature. You go by and say, ‘Wow, what the heck is that?’ ”

Mission accomplished. “The idea,” he says, “was to create this little jewel box in the front that you would walk under, and then it would sort of float there and become a great ballroom space, and then it has a rooftop. If you notice, the rooftop on that level is different from the rooftop of the restaurant and pool, so idea is for the Cube to stand alone as a feature that could be iconic.” The Cube is semi-detached from the rest of the hotel; only the connector—the entrance and exit—is attached to the main building.

One of those connectors is the rooftop, yet another instance of necessity becoming the mother of invention. “The original design had a simple rooftop deck with a pool,” Gonzalez says. “Then the city changed, by ordinance, the ability for us to make 25% of the roof enclosed—in essence to add another floor, but for only 25%. In doing so, we were able to create an open-air restaurant that can be closed and air-conditioned depending on the time of the year.” So, while one side of the roof is highly activated, and a draw in the evening, the pool end delivers pure serenity, though you would never know that from the construction.

“The pool sits up, and then it overflows, and it’s all made from stainless steel—it was flown in, with a crane, and then welded together. It was a fun technical challenge as well,” the architect says. But guests experience only the look and feel of the shimmering, 1-inch ceramic tiles underfoot and the pool’s gentle ripples—which is the way it should be—until they emerge to pad across the deck, which is clad in ipe, a Brazilian hardwood that is a staple of tropical modernism.

That aesthetic, clean yet warm—by now well established in Miami but far less so in Palm Beach County—reflects the fruits of Jarjura’s labors. Before her efforts, only seven architectural styles were permitted in Delray Beach: Florida vernacular, Anglo-Caribbean, Mediterranean Revival, classical tradition, art deco, masonry modern and Main Street vernacular. Now, with her prized tropical modernism, there are eight. In this way, the Ray represents the frontier.