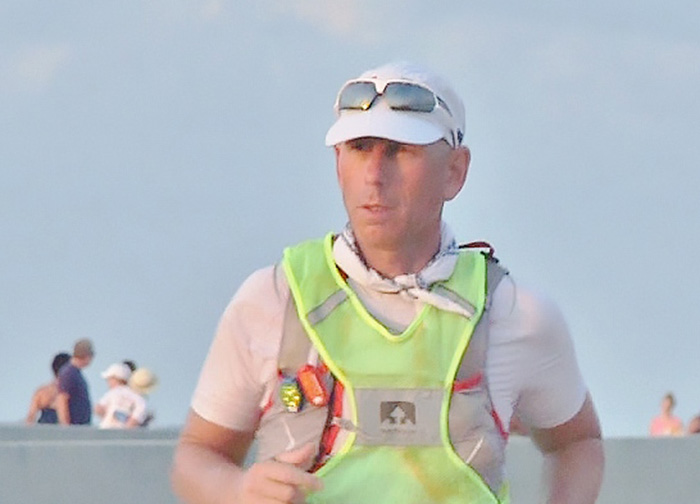 Brightline’s MiamiCentral station, which has a 9-acre site just north of the historic Miami-Dade County Courthouse on Flagler Street, has come out of the ground rapidly in recent months. Workers were poised to start attaching steel framework to the concrete support structures during a tour given by Planz, who is vice president of Miami operations for Suffolk Construction. He sees a parallel between MiamiCentral, where he is the project manager, and his ultramarathon runs.

“It should look overwhelming. It’s a half-mile-long bridge with three buildings being built over it,” Planz says. “You say it’s impossible. When it comes to a 100-mile race, you think it’s impossible.”

For both the races and the project, he has a plan and a crew.

His mental approach to ultramarathons is to tell himself he’s just running 2 miles at a time, which is when he swaps out his hydration bottles. “You just continue to go 2 miles. I did the same for the project. I broke it up into small manageable parts.”

He has a 30-member team on the project, including some colleagues who have been part of his support team for ultramarathons.

Planz’s job is akin to being an orchestra conductor for the roughly 15 contractors who may be working on the project at any given time. There are typically 400 workers on the site.

Planz took up ultramarathons after earlier doing marathons and Ironman races. He has done at least 150 marathons, which are 26.2 miles, and 18 Ironman Triathlons, which combine a 2.4-mile swim, a 112-mile bike ride and a marathon. It’s not unusual for Planz to get up at 3 a.m. at his home in Miami’s Roads neighborhood to do a training run before work.

Planz, who was born in Albany, New York, was a scholarship baseball player at Gannon University, where he majored in electrical engineering.

He returned to Suffolk three years ago, after working with the company from 1996 to 2008. Working with Suffolk Southeastern President and GM Jeffrey Gouveia and VP Chris Kennedy is like working with family, he says.

After working on some other projects, including Atlantech Plaza in Fort Lauderdale, he had the opportunity to work on the station proposal. Boston-based Suffolk, which is one of the nation’s largest construction companies, was chosen from a handful of finalists, Planz says.

At the start of the tour, Planz explained how passengers arriving in Miami will glide up an incline north of Northwest First Avenue and Eighth Street, the northern edge of the station. The tracks will be 50 feet above street level.

As an example of just one of the complexities of the project, Planz pointed to a concrete support that bridges over the Florida East Coast Railway spur leading to PortMiami. That had to be built while freight trains still rumbled underneath. His project must not only cross over three city streets, but the Metromover as well.

During the tour, the concrete cores of the three buildings had taken shape. The northernmost building will house offices while the southern two towers, which are connected at the base, will be apartments.

The first phase of the rail system in mid-2017 will connect the downtowns of Miami, Fort Lauderdale and West Palm Beach, with each segment about a half-hour of travel time. In 2018, the system will provide a three-hour trip to Orlando International Airport – connecting the state’s two biggest international tourism destinations. MiamiCentral also has platforms for the Tri-Rail commuter system and will have connections for both Metrorail and Metromover.

“When I started reading about it, I realized it was more than just a project, because of what it’s going to do for the state. It’s also going to change the entire landscape of downtown,” Planz says. “You become in awe that you have the opportunity to be a part of something like that.” ↵

The core of a MiamiCentral building emerges