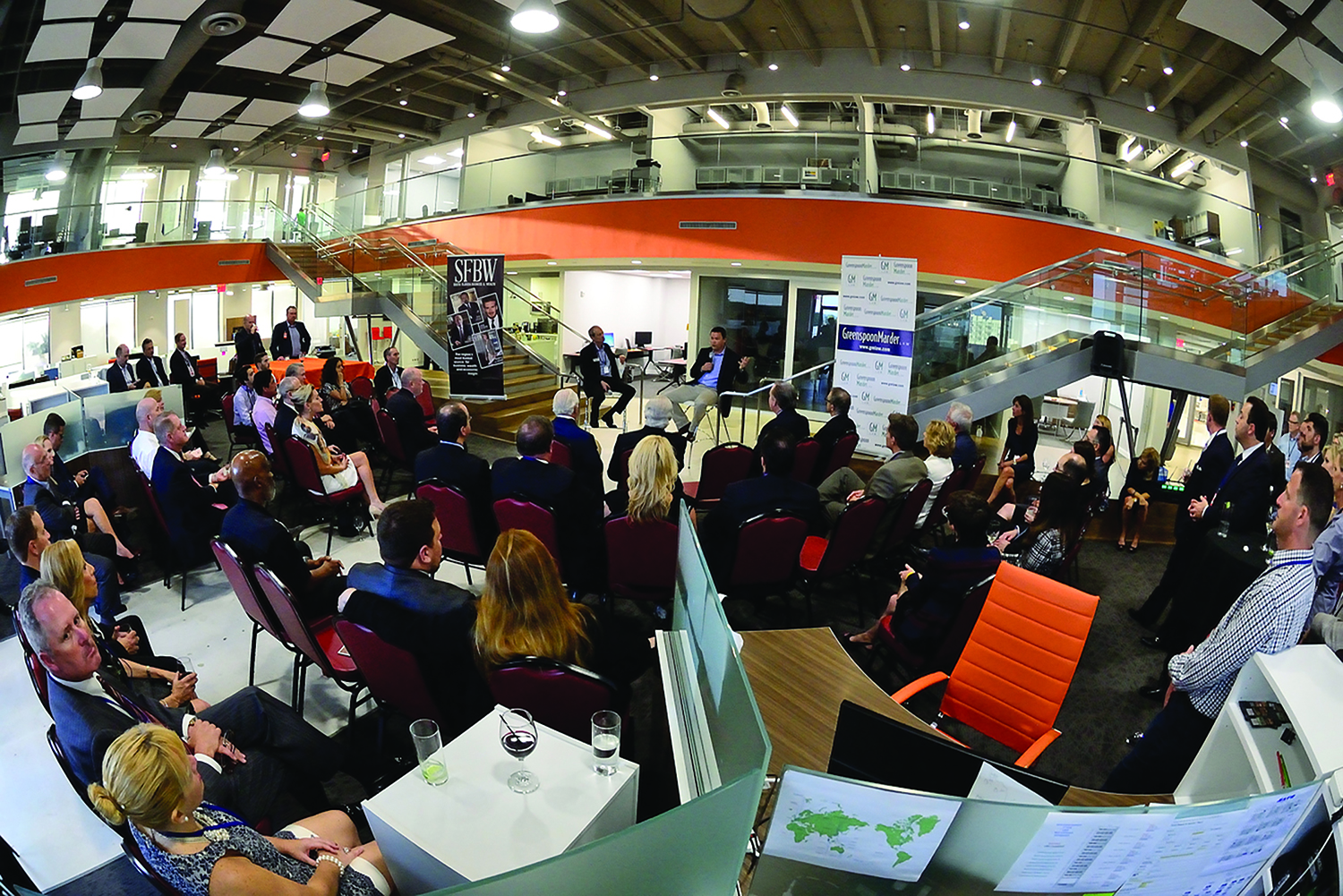 In the world of the Internet of Things (IoT), SGS enables customers to gather data from an array of sources, such as radio frequency identification (RFID) devices, to understand what’s happening and increase customer engagement. A December 2015 profile of the Fort Lauderdale-based company can be found at SFBWmag.com.

Beedles previously co-founded several technology companies, including TRAKiT, which was acquired by SATO in 2007 when he became director of SATO America. Parent company SATO Holdings, which is headquartered in Tokyo, had $877 million in sales in 2015.

Beedles was interviewed by SFBW Chairman Gary Press as part of the CEO Connect series, which is sponsored by Greenspoon Marder and TD Bank. The following transcript was edited for brevity and clarity.

Can you explain in layman’s terms how RFID works?

Think of a bar code and think of a chip that’s the size of a grain of sand. Basically, we make the bar code electronic. You can have data appended to it.

For example, the retail industry deals with a $45 billion to $50 billion problem: carrying too much inventory. Typically, that is from October to December. One of the technologies our team works on is to give visibility to every single garment in the store 24/7 without human intervention. Once you have that, you can reduce inventory carrying costs and show what the supply chain, ordering and forecasting looks like. The RFID can be in the garment itself, on a price tag or in the care label. You can monitor a store anywhere in the world all day, tracking color, style, size and quantity. As products are moving, it gives an idea of where products are going. If it’s purchased, it goes through the point-of-sale system.

Another thing RFID can help with is authentication; knockoffs are a multibillion-dollar problem in the industry. Technically, one day it will come to a point where you can take your device, scan the item, and tell if it’s real.

Now that we have the basics, tell us a bit about the different displays in the showroom here and why they are important to people in those fields.

We have selected four verticals. We probably work in a dozen and the technology is across all verticals. You can get visibility of every item. For example, apply that to health care – knowing every single gauze and sponge a surgeon uses and tracks it. Think about how many beds are occupied in a hospital or where the equipment and assets are. It’s a huge problem in all markets, whether retail, oil and gas or hospitality.

In hospitality, for example, you can change your experience by being able to notify the staff of who you are. You go straight to your room, your temperature is already set. Maybe you like orange Skittles and they are there, based on the profile you set.

What’s the impact of so many products being sold online these days? Is it helping your business or posing challenges?

I heard you were appointed as chairman of the Acuitas Digital Alliance.

Intel Corp., RetailNext, Nexgen Packaging, British Telecommunications, and our company are founding members. Our team has the opportunity to work with companies like Intel and develop new technology and products before they come to market. We are excited about that because we are doing it right here. A lot of Silicon Valley companies are traveling to Fort Lauderdale – more than you would know. Acuitas is a global organization that is going out and really trying to attack vertical markets and bring technology in to solve problems.

I’m sure these RFID and bar code devices generate information that turns into big data, which is a hot trend. How does SATO help its partners make sense of it all?

We grab a lot of data and we write applications. If there is not an application, we will develop it. We figure out from a business analytics standpoint what our customers need. We give you what you need to run your business and solve your problems.

Some of the technology will be released this year to streamline operations and hopefully cut costs out of the large corporation expenses so they can lower prices. We have some pretty big companies that have already signed on.

How did the headquarters end up in South Florida?

We did an analysis by city. We worked with the governor’s office and found there is a tremendous talent pool in South Florida. We talked to the universities. Lifestyle matters. The region is beautiful. We also do business in South America and 26 countries. So for us, it’s a nice growing part of the country.

It came down to taxes. Florida was aggressive. The alliance pushed a lot with the governor’s office. It was back and forth between former Texas Gov. Rick Perry and Gov. Rick Scott. Austin was our second choice. We said let’s make Fort Lauderdale Silicon Beach.

How many entrepreneurs or companies have moved here to be close?

We are working with a couple of real high-tech firms. One of them is a group out of California called Not Impossible Labs. They are looking at the area right now. They have developed some prostheses and eyewear for people with ALS. There is some really good technology that we are looking to get involved in.

What is your style of leadership?

I’m a big believer in teamwork and not to make it all about me. We wouldn’t be here if we didn’t have really, really good people that had vision. I travel a lot. My style is not to micromanage, but to give them the freedom to what they do. We try to find those people who can lead themselves.

We are having a colorful political season. You travel globally. What are your impressions?

What is going on here really matters to people in other countries – probably more than I realized. Other governments are interested because it impacts them. They watch the U.S. because when the U.S. stumbles, the rest of the world stumbles. We are in China, but we worry about more what’s going on in the U.S.

What do you do for fun?

I have two kids: a daughter who is 19 in college and a son who is 16 at St. Thomas Aquinas High School.

I try to spend as much time as possible with my family when I’m in town. I try to get down in the Keys, but I like to stay home because I am gone so much. I like to fish and I like to boat. I also like to golf, but I don’t have a lot of time for that.