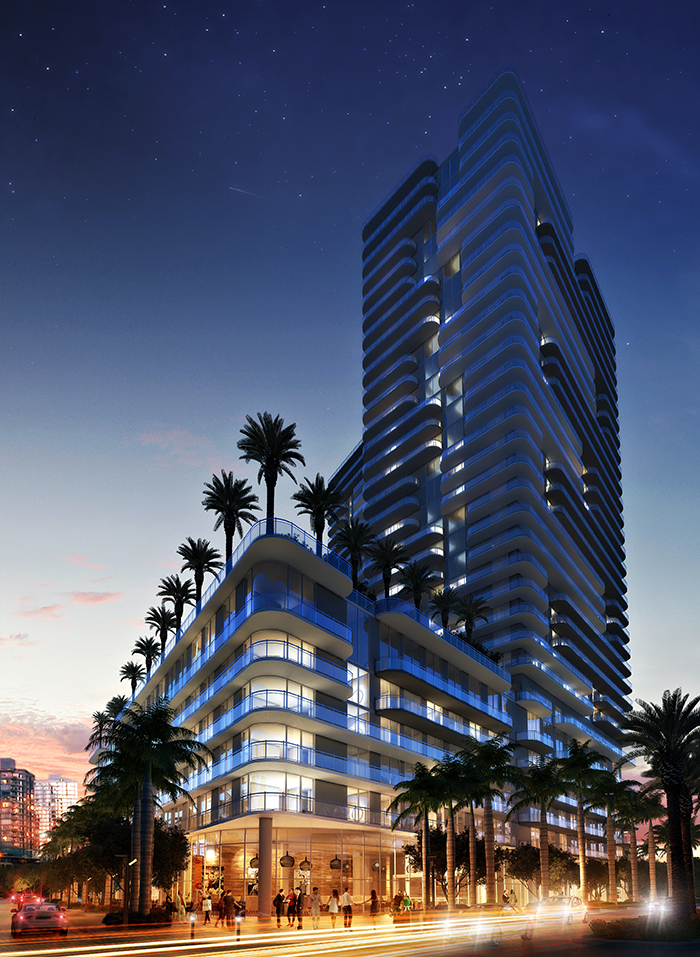 Urban chic in Miami is expected to reach a new high in 2017 with the completion of the Hyde Midtown Suites & Residences project located between the Design District and Downtown.

The joint venture by The Related Group and Dezer Development will comprise 410 residential condo units and 60 one-bedroom designer hotel suites. Amenities in the building, which is designed by Arquitectonica, include a seventh-floor pool terrace and tennis court with views of Biscayne Bay and Miami’s skyline, access to the Hyde Beach Club, a spa and fitness center, meeting space, premier hotel-style concierge services, a children’s play room, a private media center and chic food and beverage outlets.

Created with tech-minded, culturally fluent young professionals in mind, Hyde Midtown’s concept is a collaboration of hospitality group sbe’s Hyde brand amenities and design by Rockwell Group, whose impressive credits include the Dolby Theater in Los Angeles, the Architectural Digest Greenroom at the 2014 Oscars and Nobu restaurants worldwide. Rockwell Group is designing the project’s lobby, amenity floors, elevator corridors and guest suites. Inspired by the bold, irreverent style of the art galleries and hyper-luxurious retail shops that surround the new project, Rockwell Group chose a palette of neutral materials with small pops of color to achieve an unfussy, yet luxurious and sophisticated ambience.

“Hyde Midtown is uniquely positioned within Miami’s Design District, Wynwood and Midtown, three emerging neighborhoods that are burgeoning centers of art, design and culture,” says David Rockwell, founder and president of Rockwell Group. “We felt it was important that the public spaces and guest rooms reflect their unique local surroundings, so our design concept is based on the notion of “the new luxury,” an eclectic, edgy mix of raw and finished materials, contrasting colors and handcrafted design elements.”

The lobby interior is based on an art hotel concept, with concrete flooring, exposed concrete ceilings and blackened metalwork throughout. A condo reception desk clad in American white oak, a white grand piano and an interactive geometric pattern projected onto the ceiling are a nod to Miami’s art deco architecture. The lobby walls will feature custom-designed metal mesh and blackened-steel display ledges to showcase contemporary artworks from the collection of The Related Group’s chairman and CEO Jorge Pérez.

Like the lobby, the rooftop areas will emphasize controlled, neutral finishes. Blackened metal pergolas will include succulent-filled garden beds and built-in bird-bath-style tables. Top-mounted plantings will grow across a blackened-steel canopy above the outdoor island bar and will stretch down toward the teak bar top with its blue-glazed Portuguese tile accents.

Carlos Rosso, president of condominium development at The Related Group, says, “Much like the boroughs of New York City, each of Miami’s neighborhoods is developing its own unique personality. Rockwell’s striking designs and appreciation for the surrounding cityscape are not only giving the district its signature vibe, but they are also making the Hyde brand synonymous with the Midtown district.” ?