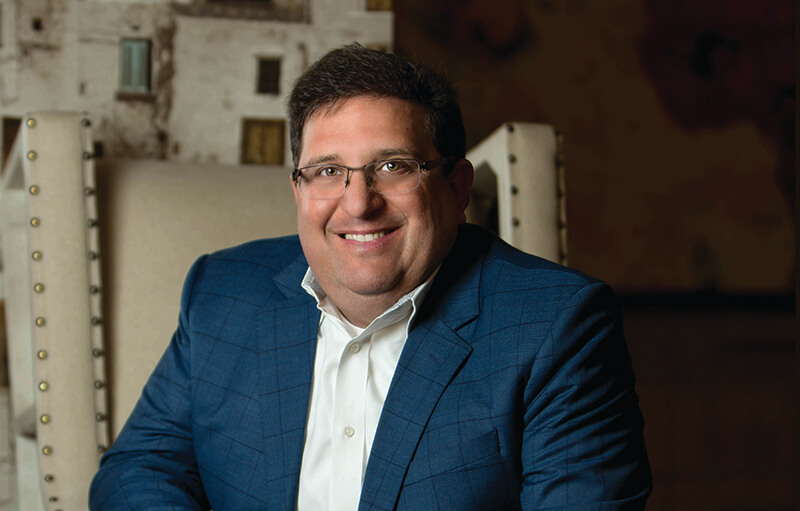 What’s Next for Salo?

Sredni’s life odyssey includes being born in Colombia, moving to Miami as a teenager, growing TradeStation as chairman and CEO, becoming chief operating officer of the Japanese brokerage that bought TradeStation, and now serving as president and co-founder at ChronWell and managing director at Ocean Azul Partners.

Like many successful people in South Florida, Sredni came here amid strife in his homeland. Sredni says his family was on vacation in Florida during a civil war in Colombia when his grandfather said it wasn’t a good idea to return home. If you watch the Netflix show Narcos, that’s what was going on in Colombia at the time, he says.

Sredni attended Hebrew Academy in Miami Beach without being fluent in English. Sredni says he adjusted quickly and ended up earning an accounting degree at Penn State in 3½ years—the only time since age 14 he hasn’t lived in South Florida.

How did he end up back in Florida after graduating in 1987? “It’s a funny story. I got an offer in New York because Florida had just put in the fifth-year requirements for CPAs,” he says. “Peat Marwick gave me an offer and I had an office visit here. I left State College [Pennsylvania] in the snow, and the wind was blowing and it was 12 degrees. I got here and it was a [nice] day. I was overlooking the bay, and it was sunny, and the temperature was in the 50s, and I said, ‘What the hell am I doing?’ ”

After a short stint at Peat Marwick, Sredni went on to work for six years at Arthur Andersen and Andersen Consulting. He became bored doing audits, so he did turnaround work, IT consulting and management consulting.

He worked as chief accounting officer for Ivax, which was led by billionaire Phillip Frost, for two years, but, in 1996, he started working for Omega Research, the predecessor to TradeStation. It had about $17 million in revenue and 30 employees, but a lot of potential, he says.

Sredni worked as vice president of operations and chief financial officer, rising to president, CEO and chairman. By 1997, the company went public on Nasdaq. In 2001, the company became an online securities brokerage and adopted the TradeStation name.

“We were very lucky with a great team there that was able to really push the envelope and develop some great tools and unique tools to help traders really level the playing field with institutions,” Sredni says.

In 2011, TradeStation was sold to Monex Group, which is the holding company for the second-largest brokerage in Japan. TradeStation was named by Barron’s, a weekly financial magazine, as the best online broker for the third consecutive year.

“I was going to leave, but I ended up staying and six months later I got promoted to be COO of the holding company and I was on the board. I was the only non-Japanese speaker on the board,” Sredni says, calling it one of the greatest experiences of his life. “The culture is very different than in the U.S. culture. Understanding how they did things and understanding how companies operate there is a great experience. … In the U.S., so often, we think there’s only one way to do things when, in reality, when you go outside, there are different ways to skin the cat.”

For example, Japanese companies often rotate people between jobs while in the U.S. people tend to have a career and stay put. “There, more often than not, you understand people’s strengths and put them where they best fit in the organization,” Sredni says.

Sredni says he thinks he was tapped for the COO role because he was flexible on culture and understood there were different ways to accomplish objectives.

“I’m open and curious, and my style of leadership is one where I get the right people and sort of get out of the way,” he says.

The next big thing

Sredni left on April 1, 2016, with the idea of taking time off but immediately started getting inquiries from people who were interested in working with him.

“Really, for almost a year, I had a different lunch and different breakfast with somebody else going through ideas, evaluating ideas,” he says. “I got involved with a few boards of established companies and a few boards of entrepreneurs and helped them with their journey to success. I really, in earnest, took no time off. I think my DNA does not … let me sit back, relax and do nothing. That would have given me a lot of anxiety. … I did do quite a bit of travel that I had sort of scheduled.”

Sredni says he and his wife love to travel and have visited more than 70 countries. The only continent they are missing is Antarctica.

Sredni became involved in the region’s entrepreneurial ecosystem, including Endeavor Miami, where he is still a mentor.

For his next big thing, though, Sredni was contacted by his one-time boss at Arthur Andersen, Bill Pruitt, who became an angel investor after serving as Arthur Andersen’s managing partner for Florida, the Caribbean and Venezuela.

Pruitt had a knack for due diligence and then finding partners on deals, Sredni says. “His IRR [internal rate of return] was 39 percent a year.” No wonder that some people nicknamed Pruitt “Midas.”

Sredni became one of five partners at Ocean Azul Partners, a venture fund investing in startups, mostly in technology.

“We have raised over $10 million right now. We’re in the process of deploying that capital with companies mostly here in South Florida. We have a good pipeline out of MIT in Boston and companies in Israel,” Sredni says.

The partners won’t invest in a company unless they think they can get 10 times their investment back in five to seven years. They also want companies that offer something unique—“companies that are creating the future, not solving a problem of the past,” is the way Sredni puts it.

They seek companies where the principals are open to feedback and the partners can add value, whether it’s using their experience or their network of contacts.

The fund looked at more than 150 companies and invested in a handful, he says. One of them is DadeSystems, which helps with accounts receivable automation and mobile payments. Another company, Clark Industrial Engineering, has patented technology for advanced industrial valves.

“What we’ve done is, we stumbled on an incredible opportunity, which was to change and disrupt the way workers’ compensation is processed in America,” Sredni says. “Workers’ compensation has been neglected and is pretty screwed up. It’s really not sexy and not very prone to change.”

ChronWell will use technology to help injured workers—by improving communication with employers, payers and providers—get back to work more rapidly and at a lower cost.

ChronWell First Care is a concierge service to help injured workers get more seamless access to appointments, transportation and physical therapy. It can use technology such as chatbots, which leverages artificial intelligence to conduct meaningful, contextual conversations.

Often, injured workers feel neglected and might be enticed by TV ads from lawyers who say they can help, Sredni says. “What we are trying to do is make sure [employees] are taken care of and feel they are taken care of.”

Using artificial intelligence will help overwhelmed workers’ comp administrators process claims more quickly. ChronWell also wants to gather information about who the best providers are. For example, a provider who takes two weeks to schedule an MRI drives up costs for employers who have to wait longer for the injured worker to get back on the job.

The target market includes state funds and self-insured employers or pools of employers. The pools can help spread risk among employers.

ChronWell has raised $10 million and is negotiating with a state fund and a large employer pool. It hopes to have the first version of the concierge system in place shortly.

ChronWell is positioned for rapid growth, Sredni says. “Sales cycles will be long because we are dealing with big, big customers, but what we want to do is have beta sites, pilot programs and then get rolling from there. … It’s technology-enabled, so we think we can scale it pretty fast.” ♦