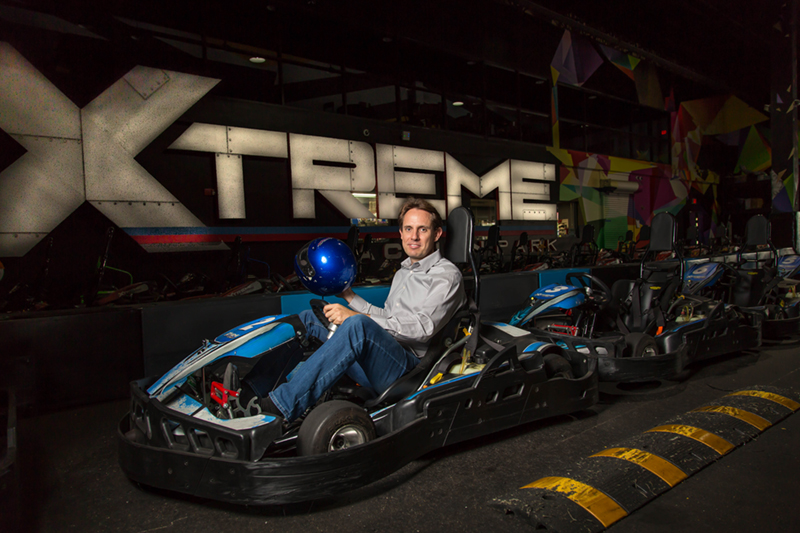 If you are looking for a fun venue for team building, Xtreme Action Park awaits. Want an adrenaline rush? Compete with your coworkers on a half-mile go-kart track. Want something intellectually challenging? Try solving puzzles to get out of an escape room.

There are also bowling, a ropes course and a bar where you can banter about the experience. There’s plenty of event space, ranging from conference rooms to a roller rink that can transform into a 2,000-person gathering place.

Xtreme’s location is strong for corporate events since the Fort Lauderdale Uptown area employs 70,000 people. Xtreme is a pioneer in what’s called the “Envision Uptown” movement. A 2014 Urban Land Institute study says the area near Commercial Boulevard and Cypress Road has a good population density but needs to transform into more of a live/work/play neighborhood. Xtreme definitely fits the definition of play.

Behind Xtreme are three partners who each brought something to the table:

• Michael Dezer calls himself the real estate guy. He started collecting buildings in New York and found great success in Sunny Isles Beach by doing projects with Donald Trump and collaborating with The Related Group. He’s also a notable car collector, which is reflected in his family’s new Porsche Design Tower in Sunny Isles Beach.

• Aaron Parkinson is a technology guru and serial entrepreneur who found success in the wastewater treatment field and has developed the electric Golf Skate Caddy and Fiik Skateboards.

• David Goldfarb is literally the fun guy, as he owns PrimeTime Amusements. He started out with a couple of pool tables in his fraternity house and now operates more than 2,000 arcade games, including cutting-edge models found at Xtreme.

So how did they
come together?

Goldfarb’s company was a supplier to Xtreme Go Kart before the latter closed and also had provided games for Dezer’s Miami Auto Museum in North Miami. He told Dezer about the 340,000-square-foot building going on the auction block back in 2014 and Dezer won the bid.

They converted part of the building into office condominiums. Bekins Van Lines took 110,000 square feet and Goldfarb took 20,000 square feet for his business. Then Goldfarb became involved in the roughly 125,000-square-foot first phase of Xtreme, which kept and overhauled the go-kart track. Dezer owns about 80,000 more square feet, which includes the museum with his cars and a trampoline park, which is a tenant.

He expects many mixed martial arts and professional athletes to use the gym and has lined up three trainers, who will be owner-operators: Henri Hooft, a top professional trainer for martial arts fighters; Mario Sperry, a top jiujitsu coach; and Tony Villani, whose XPE Sports in Boca Raton is a top performance-training site for NFL players and collegians preparing for the draft.

There’s synergy among Xtreme’s individual elements. For example, Goldfarb expects Xtreme to get exposure when sports networks cover big-name athletes training there. There also will be some crossover activity because some football players enjoy mixed martial arts and some MMA players want performance training.

“What’s unique is it will fall under one roof here,” Goldfarb says.

The partners were encouraged by the success of the first phase of Xtreme, which included the go-kart track, bowling, the arcade, a ropes course and Bazooka Ball, a combat game with elements of laser tag and paintball. They managed to double their initial forecast for revenue. The second phase included leasing out space for the trampoline park, doubling the arcade space and opening the museum, roller-skating rink and the escape rooms.

Dezer said he was attracted to the building by its sheer size. “Everything I do, I like to do big,” Dezer says. He needs a lot of space for his growing car collection. However, the attractions part of the business has done so well that Dezer says his attitude is less about car museum space and more about games.

Dezer, who also owns 15 acres of land in Las Vegas, said his love of cars goes back to when he was a teenager in Israel and he got into trouble once for taking a spin in a car that wasn’t his. Among his earliest purchases were a Vespa scooter, a Harley Davidson motorcycle and a 1949 Plymouth. After being a paratrooper in the Israeli armed forces, he moved to Queens.

Dezer says he bought a former Chevrolet dealership in New Jersey to have a place to put his cars and then sold it for three times what he had paid. He went on to create a real estate empire in Manhattan’s Chelsea and Flatiron districts by purchasing industrial and manufacturing buildings in the 1970s. Dezerproperties.com says the holdings include 20 buildings with 1.3 million square feet.

After he moved to Florida, he bought a string of hotels in Sunny Isles Beach that turned into sites for condos and the Trump International Beach Resort.

His car museum in North Miami has two buildings with 250,000 square feet and is worth 10 times what he paid for it, Dezer says. He thinks the value of his Xtreme real estate has doubled in value already. He is looking for a tenant to lease the former Syms building, which is in front of Xtreme.

Dezer’s car museum at Xtreme has a huge collection from the movies, including “Back to the Future” and every James Bond movie, he says. Admission is $10 for Florida residents. Dezer says he also has 250 micro cars, which is the world’s largest collection. He also has a big collection of Vespas and just spent $500,000 on 31 more.

Parkinson learned about Xtreme from Goldfarb, who is a fellow member of the Entrepreneurs Organization.

“I’m a bit of an adrenaline junky. I saw an opportunity to get into a fun business,” he says.

Parkinson, who has offices upstairs at Xtreme, is bringing his technology chops to the business, including integration of the various systems for the go-karts, such as point of sale, signing the waiver and selecting race times. That will also help give more functionality to Xtreme’s mobile app, which allows live views of races.

Xtreme already gathers a lot of analytics, such as accidents and average lap times. Drivers have to pay for an $8 annual license that also comes with a helmet liner. The systems then track them, so drivers who crash a lot are automatically slowed down.

Dezer was asked if Xtreme could be replicated elsewhere. “Yes, after we do this and have a couple of good years running, of course. We would be stupid not to do it in other places.”

One potential site is Dezer’s Las Vegas property. He’s turned down a number of would-be buyers, but Lady Luck might have just rolled his way. The preferred site for the new pro football stadium that will house the NFL’s relocating Oakland Raiders, at Dean Martin Drive and Russell Street, is a block from his land. “Something like this when they go to the game could be great,” Dezer says.

Hours: Open 365 days a year starting at 11 a.m. daily and closing at 10 p.m. (Sunday-Thursday) and midnight (Friday-Saturday). Parking is free.

Go-Karts: A half-mile track—the only indoor asphalt course in South Florida with gas-powered cars. Pro Karts go up to 45 mph and Super Karts go up to 65 mph.

The Arena Roller Skating Rink & Performance Venue: A 16,000 square-foot venue including a 12,000-square-foot roller-skating rink plus a DJ booth and VIP seating. It can hold up to 2,000 people for private events.

Bazooka Blast Glow in the Dark Arena: Teams suit up with scoring vests and masks and use 2-inch foam balls fired from paintball guns.

Evolution Escape Rooms: Players are locked in a room and have to solve a series of puzzles and escape within a set time limit. It is marketed for corporate team-building and other events.

Fort Lauderdale Auto Museum: The Dezer Collection features the world’s largest micro-car collection plus classic cars, military vehicles and famous movie vehicles such as James Bond cars and the six-wheeled monster convertible from “The League of Extraordinary Gentlemen.” The museum can be booked for galas, seated dinners, cocktail receptions, birthdays and corporate gatherings.

Conference and party rooms: Can hold 20 to 75 people.

Skybox Lounge: A unique 2,520-square-foot space overlooking the track for corporate entertaining by day and private bar and restrooms.