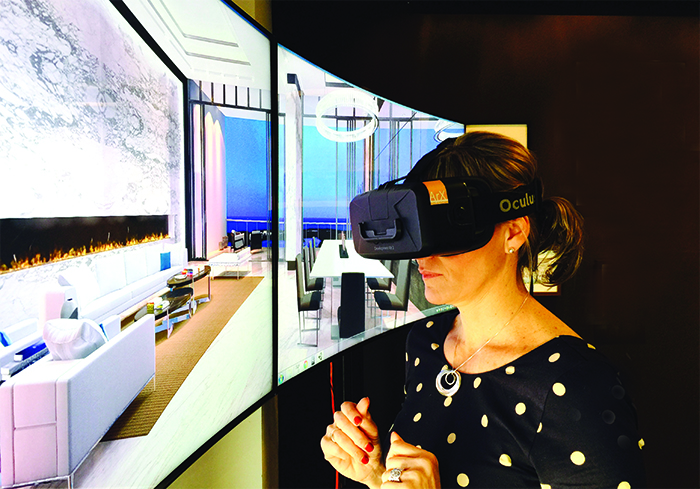 Residential real estate sales are moving into the world of virtual reality with technology developed by ArX Solutions in Coral Gables.

A recent visitor to the company’s headquarters was able to put on a pair of Oculus Rift virtual reality goggles, sit in a chair and use a remote control to experience walking through a new condo –
going from the great room to the bedroom and even out to the balcony, which had a view of Biscayne Bay. The renderings were so realistic that one can get vertigo looking over the virtual balcony.

Navarro and his brother, Gonzalo, were originally architects in Argentina who brought ArX to life in the early 1990s when they researched computer graphics. Patricio Navarro says they became the biggest architecture visual�ization firm in South America, but continued to do architectural design in parallel. They came to the U.S. after a major recession hit Argentina in 2001. “We were almost broke at that time,” Navarro says. “The currency lost three-quarters of the value in one day. All of your savings became one-fourth of what they were on Monday. The whole financial system was completely broke. People would go to the bank with flares to literally burn the bank.”

They had less than $30,000 to open in South Florida, but since 2003, the company has been growing by almost 100 percent a year, Navarro says. They survived the recession without firing any staff and “when things became better, we were in the pole position.”

The company keeps expanding. It has 23 employees in Miami and 14 in Argentina. Most of the staff members are artists, who generally are also architects and interior designers. ArX has coders on staff as well, and was recently looking to hire more employees to support growth.

ArX does business with 95 percent of all major developers in South Florida, works on a lot of projects in New York City, which is led by Nicolas Michael, and has also worked on projects in the Mideast, United Kingdom and Asia.

The firm’s most ubiquitous products are the realistic architectural renderings used to woo buyers.

Animating the images into virtual reality requires a powerful $10,000 personal computer capable of doing millions of calculations per second. Oculus was attractive for virtual reality because it is used with games that have an immersive mode, Navarro says.

The first Oculus Rift, the Developer Kit No. 1 (DK1), could do side-to-side motion, but the Developer Kit No. 2 being used by ArX now can do distance and pitch to give a realistic sense of movement. The biggest drawback to the DK2 is that the resolution isn’t high enough for each eye not to be able to see the pixels, Navarro says.

In a demonstration of the 4K system, Navarro used a mouse and joystick to walk through a condominium. Users can click and can see how different finishes and furnitures look.

Showing off an Echo Brickell penthouse unit, he panned around a room with fireplaces and showed views of the Key Biscayne bridge.

On some projects, drones are used to shoot skylines.

The touring experiences can also be used on tablets and smartphones, whether Android or iOS.

Usually, the animation is preceded by the still image renderings, Navarro says. “Otherwise, it can be a never-ending process because the developers see problems everywhere.”

Costs for the animation can start at $40,000 and go past $1 million if a developer wants to show a lot of rooms.

ArX also has developed an app. Point it at a picture that’s loaded into the app’s database and a 3-D-like image pops up on the screen.

What’s next? Navarro says SteamVR, which is being created with HTC. The system will capture the position and orientation of a virtual reality headset as people walk through a room. The SteamVR website says developer kits are expected to ship by summer, with consumer hardware arriving later in the year. ?