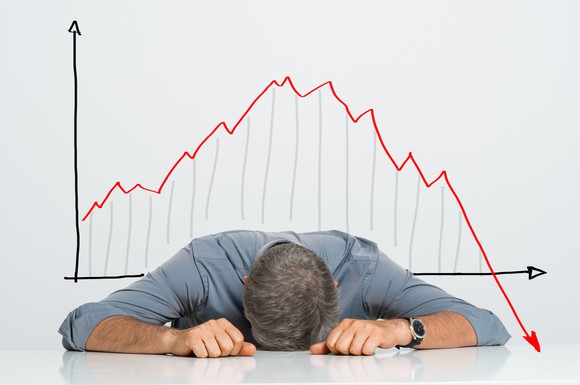 3 High-Yield Stocks to Own in a Market Crash

If you’re concerned about a forthcoming market correction, GlaxoSmithKline, AT&T, and Procter & Gamble may be worth buying right now.

Although the broader markets are currently trading at historic highs and investor sentiment remains strong, there is always the possibility of an unforeseen correction that sends valuations tumbling downward. So, it might be a smart move to consider buying a handful of so-called “defensive stocks,” or stocks that can produce stable earnings regardless of the overarching economic climate.

With this theme in mind, we asked three of our investors which stocks they think might be worth owning in the event the market crashes. They suggested GlaxoSmithKline (NYSE:GSK), AT&T(NYSE:T), and Procter & Gamble (NYSE:PG). Read on to find out why.

A healthcare stock for all seasons

George Budwell (GlaxoSmithKline): Companies that sport strong cash flows, healthy dividend programs, and compelling valuations tend to perform admirably during marked declines in the broader market. Fortunately, the British pharma giant GlaxoSmithKline ticks all those boxes — implying that it might be an outstanding stock to own for defensive investors right now.

On the cash flow front, Glaxo’s new managerial team, headed up by CEO Emma Walmsley, has been working toward improving the company’s sales volumes and gross margins across its three core businesses: consumer health, vaccines, and pharmaceuticals. While these efforts may take some time to bear fruit, it’s worth noting that Glaxo already posted operation cash flows of nearly $9 billion over the past 12 months, and that’s before these latest cash flow boosting measures were put into place.

Glaxo’s top flight dividend of 5.12% is also a rather attractive feature for defensive investors. Even though the company’s 12-month trailing payout ratio of 200% is cause for concern, Glaxo’s new management has vowed to keep its dividend program unchanged until the end of 2018. Thereafter, management plans to pin its dividend payout to cash flow generation, which is a reasonable step for a company that’s going through a fair amount of product churn, and experiencing the marked decline of its former flagship asthma product Advair at the moment.

Last but not least, Glaxo comes with a rock-bottom price-to-sales ratio of 2.39. Although investors apparently aren’t willing to pay a premium for a drugmaker that now lacks a bona fide flagship medication, Glaxo’s bargain-basement price to sales ratio strongly suggests that it is grossly undervalued relative to both its big pharma peers and near-term growth prospects. Next year, for instance, Glaxo is forecast to growth its top line by a modest 2.5%, thanks to the unexpected strength of its meningitis B shot Bexsero and its forthcoming shingles vaccine, Shingrix. In other words, Glaxo’s shares are trading as if its top line is about to crater, and that’s simply not the case.

Based on management’s ongoing streamlining efforts, top-tier dividend yield, reasonable near-term growth prospects, and dirt cheap valuation, this big pharma stock appears to have all the ingredients necessary to perform well in the event of a market crash.

Keith Noonan (AT&T): Stocks that trade at low earnings multiples offer big dividends, and have been historically less volatile than the broader market are typically strong candidates if you’re looking to build for your portfolio’s defensive potential against a potential market crash. With a forward P/E value of roughly 13, AT&T’s current valuation looks inexpensive and should give it some downside protection, and the company offers one of the best returned income profiles on the market.

AT&T stock currently yields a whopping 5.1%, and the company has raised its annual payout for 31 consecutive years — a period that has included three U.S. recessions. The forward cost of distributing its dividend represents roughly 77% of trailing free cash flow, indicating that the company still has room to drive payments upward. The stock’s big dividend helps to establish a pricing floor, and, if shares do decline, there’s a good chance that investors will move in to take advantage of increased yield — thereby creating upward momentum for the stock price.

Turning to historical volatility and future resilience, AT&T has a beta value of roughly 0.5, which indicates that the stock tends to move roughly half as much as the S&P 500 index. The company occupies leading positions in the wireless service and pay-television industries and generates most of its sales through subscription services. So, while some customers might switch to more inexpensive offerings from Sprint or T-Mobile or cancel DirecTV service in the event of tightening purse strings, AT&T has the benefit of stickiness that typically accompanies those recurring revenue streams. It’s also unlikely that a market crash would cause growth opportunities like connected cars and Internet of Things services to completely dry up.

With its sturdy business, cheaply priced stock, and a stellar dividend, AT&T looks like a top defensive stock for weathering market volatility.

Clean up with this consumer products giant

Dan Caplinger (Procter & Gamble): A 3% dividend yield might not sound like much, but when even a 30-year Treasury bond pays less than that, it’s something investors will grab hold of for dear life. Procter & Gamble is a consumer products stalwart, with dozens of lucrative brands bringing in billions in revenue each and every year for the company. Customers around the world rely on P&G for products like Tide laundry detergent, Pampers diapers, and Crest toothpaste, and the solid demand for these necessities ensures that Procter & Gamble is able to sustain its growth even during major economic downturns that often accompany market crashes.

Procter & Gamble has a couple of things that make it valuable in a crash. First, its above-average dividend cushions the blow of share price declines when markets correct, and its track record of huge dividend growth makes it a smart long-term investment. More importantly, though, P&G stock tends to be less volatile than its more aggressive peers, with recent statistics suggesting less than 60% as much volatility in share prices than the market as a whole. That won’t necessarily prevent you from losing money with Procter & Gamble stock in a crash, but it does mean that often, your losses will be less extensive with P&G than they would be with a more aggressive stock. That makes Procter & Gamble a smart defensive pick for those looking to protect their portfolios from a fall from recent all-time record highs.

10 stocks we like better than AT&T
When investing geniuses David and Tom Gardner have a stock tip, it can pay to listen. After all, the newsletter they have run for over a decade, Motley Fool Stock Advisor, has tripled the market.*

David and Tom just revealed what they believe are the ten best stocks for investors to buy right now… and AT&T wasn’t one of them! That’s right — they think these 10 stocks are even better buys.