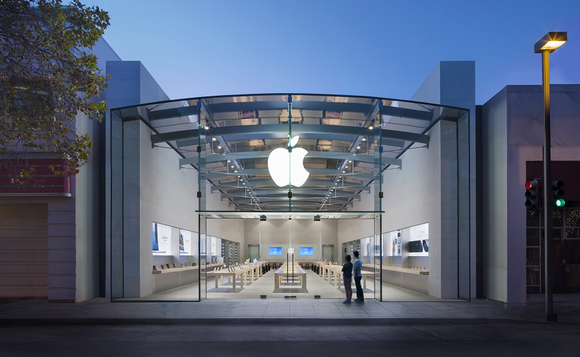 A look at what the iDevice maker is working on.

In order to get a sense of the kinds of things that companies are working on, particularly highly secretive ones like Apple (NASDAQ:AAPL), I like to look at what positions those companies are hiring for. In this column, I’d like to go over three particularly interesting job listings that I found on Apple’s site as they appear to give investors a big clue as to what’s next from the iDevice maker.

No. 1: Self-driving car efforts
There has been much ink spilled about the mythical “Apple Car.” The Apple Car is rumored to be an electric vehicle that may even be able to drive itself. I believe that the following job posting strongly suggests that the company is putting a serious engineering effort into such a product: 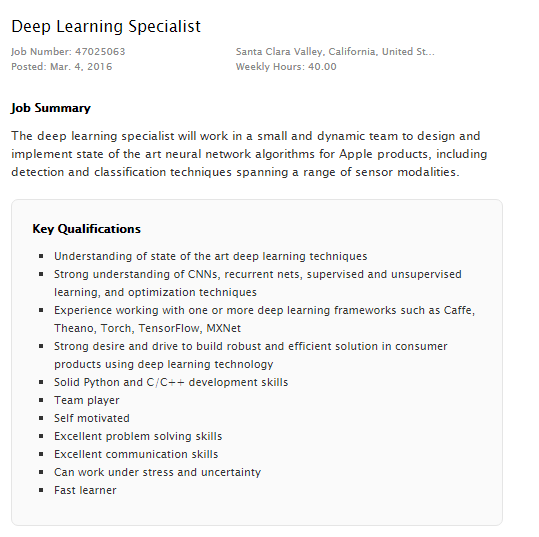 Here we can see that Apple is looking to hire a “deep learning specialist.” As followers of graphics specialist NVIDIA (NASDAQ:NVDA) may be aware, deep learning is, per the the company, “the fastest-growing field of machine learning.”

Indeed, the company goes on to explain that deep learning employs “many-layered Deep Neural Networks to learn levels of representation and abstraction that makes sense of data such as images, sound, and text.”

Deep learning is a discipline that’s central to NVIDIA’s efforts to build computer platforms that enable self-driving cars, as such vehicles need to be trained to recognize many different types of objects in the real world.

Interestingly, one of the “additional requirements” that Apple lists in this job posting is “experience/knowledge of GPU computing” with experience using NVIDIA’s proprietary CUDA programming environment “preferred.”

This job listing strongly suggests that Apple is looking to pursue self-driving cars.

No. 2: Optical coatings
One of the key features of the iPad Air 2 was the introduction of a fairly novel anti-reflective coating. This coating, according to DisplayMate’s Raymond Soneira, led to a significant reduction in ambient light reflections compared to “the very best competing tablets and smartphones.”

Per 9to5Mac, one feature of the upcoming 9.7-inch iPad Pro is an updated anti-reflective display coating relative to the one found on the iPad Air 2.

It’s unsurprising then that Apple is currently hiring for a Senior Optical Engineer whose job it will be to “[lead] overall investigation on advanced display optical coatings.” The listing says that the individual hired for this position will “work with both suppliers and internal teams at Apple to shape the display related technologies that go into Apple products.”

I suspect that one way that Apple will improve the effective contrast ratio of the iPhone 7/7 Plus/Pro that arrive later this year will be to implement the same second generation anti-reflective coating that the 9.7-inch iPad Pro is expected to have.

No. 3: That Apple GPU …
I have believed for quite some time that Apple is in the midst of building its own graphics processing unit, something that has been widely reported on at this point. The timing is not clear on when we will see Apple shift away from designs produced by Imagination Technologies (NASDAQOTH:IGNMF), but I think it’s only a matter of time.

Unsurprisingly, on March 4 alone, the iDevice maker put up job listings for two positions that suggest that the company is hard at work on its own graphics processor designs.

The first is for a “Graphics Core Hardware Verification Engineer.” The person serving in this role will be “responsible for top-level pre-silicon RTL verification of embedded graphics cores.” In other words, this person will be on the team responsible for making sure that Apple’s GPU designs should work before they are put into silicon.

The next position that Apple is looking to fill is for a “Graphics Software Engineer.” This person will “be responsible for software tasks required for the development and verification of a GPU design.”

I’m keeping my fingers crossed for an Apple-designed graphics processor to appear in the A10 system-on-chip that’s expected to debut with the iPhone 7 this fall.

Ashraf Eassa has no position in any stocks mentioned. The Motley Fool owns shares of and recommends Apple. The Motley Fool recommends Nvidia. Try any of our Foolish newsletter services free for 30 days. We Fools may not all hold the same opinions, but we all believe that considering a diverse range of insights makes us better investors. The Motley Fool has a disclosure policy.