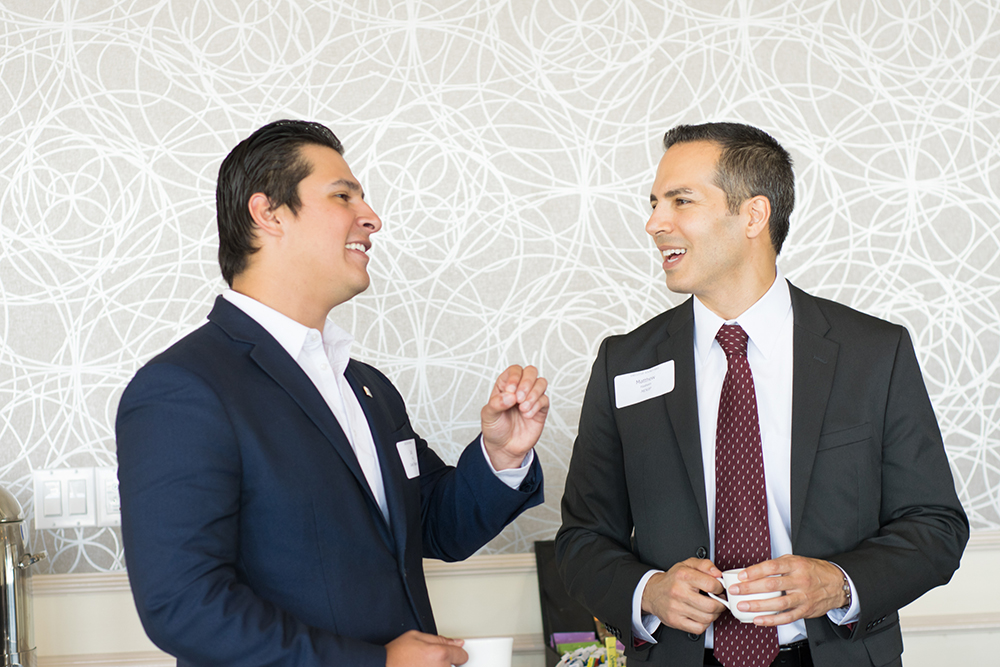 Anecdotes from the C-Suite

How do you and your organization define innovation?

Rashidi: It’s interesting being in the tech and data analytics field. You can’t pick up a newspaper, whether it’s the Economist or the Harvard Business Review, that doesn’t touch upon the subject one way or another. Five years ago, every organization had an innovation pact. And I thought, how can one person lead innovation at an entire organization? To stay afloat in any competitive environment, you have to constantly reinvent yourself. Stagnation is death. Period.

So I do think innovation comes in many forms. I do think, however, you have to understand your limits. Think big. Start small. And scale quickly. Especially with digital transformational programs because things don’t happen overnight. Know your environment, know your market, know your registry. The other element is, our beloved CEO constantly wants to model our company after the Amazons, the Apples, the Disneys, the Googles of the world. And we have healthy debates. He wins. I don’t. And I go, ‘It’s not fair, these are companies that have operating models that were built on nothing.’ And they’ve used data, analytics and robotics to propel themselves, and that’s part of their fabric. No one has brought into the company without having that level of DNA within other companies like ours who have been built 30, 40 years based on legacy-based customer service.

It’s the human interaction. You can’t force the technology or any digital component without this understanding.

Hashem: I still think of us as a startup company even though we were founded 17 years ago in Boca, so I should probably stop saying that. We founded MDVIP on the saying, “Necessity is the mother of invention.” Our founder, being a physician, felt like if he had the time, he would have prevented the onset of diseases for his patients. And with that, when we worked on our business model, we decided to reconfigure how medical care practice works. If physicians have more time, and are well-trained, they can work with patients on their health and get in front of many diseases and ailments. Fast-forward to today, how we deal with innovation. We put it in two classes—micro and macro. “Micro” is related to a process or protocol, and I think you want to embed that within in the organization based on culture and the people. So, if people see something is not working, officially or effectively for a customer, they got the power to change it. “Macro” level is about who are your board of directors, the CEO. It’s about the management structure and the shareholder base and how that big thinking trickles down the company line.

Knight: I’ve worked in banking for my entire career, and, in January, I joined Shop Alexis. We are a high-end womenswear manufacturer. You can find us at Neiman Marcus, Saks Fifth Avenue and at local boutiques. It’s a founder-led family business that started 10 years ago. In terms of innovation, we design for our customers in mind. Who is she? Where is she going? What is she wearing? They don’t design for what they would wear or what they think should sell.

And with our partnerships, we have hundreds of boutiques we work with, and we want to make sure that they are successful, so the customer can go to them and find items that they couldn’t find in a department store. We work really hard to design many pieces and make sure our partners are successful. 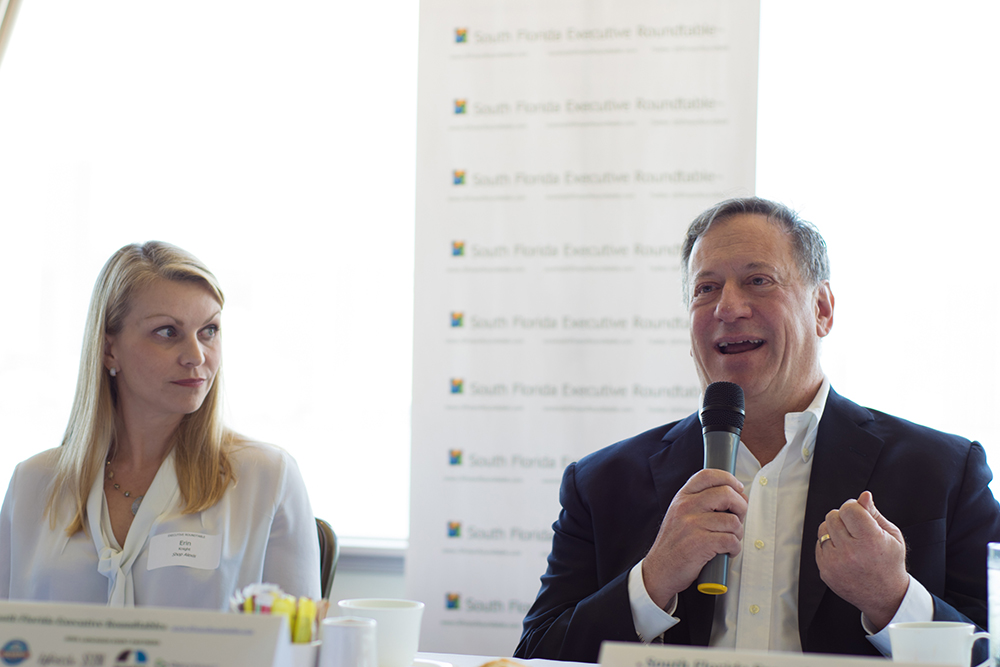 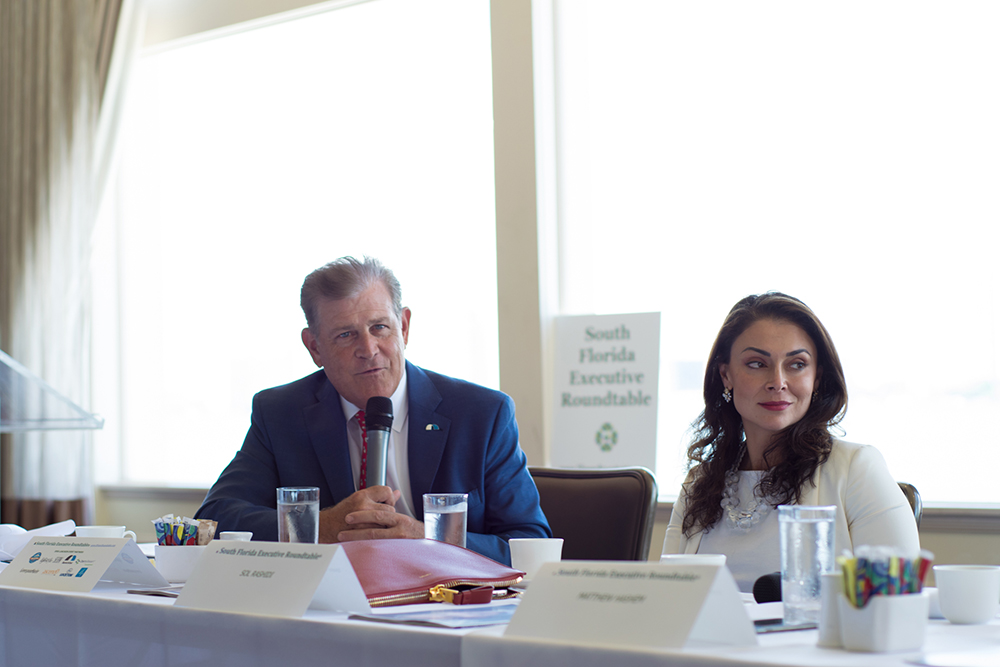 Stone: At TradeStation as chief legal officer, I am responsible for overseeing legal compliance, enterprise risk management and internal auditing.

“Innovation” is a modern word for what used to be called, 30 years ago, a “unique selling proposition.” Then it became “differentiating factor” and now it seems to be called “innovation.” TradeStation was founded by two Cuban-born brothers, who came here in the 1960s. They designed a custom trading software for investment strategies that can be tested and optimized based on data charts. It was a big idea that didn’t exist in the retail world. What these two guys did was find a way to differentiate themselves.

Talk about your firm and the potential use of cryptocurrencies.

Stone: As we all know, that’s not risky business at all. TradeStation has very active traders. Cryptocurrencies are still in [their] infancy. I’m not talking about blockchain and its uses, but purely cryptocurrency as an asset to be traded like stocks and commodities, foreign currencies. It’s not going to go away, and I believe it is a good opportunity because the regulatory environment and infrastructure around it does not exist today. It’s fragmented, yes, but it will come together eventually. And I think that good electronic growth businesses, such as retail and at the institutional level, who are putting together the right infrastructure cryptocurrency [are] an asset class for people to trade. I believe that is the direction that things are going.

As it goes on, the platforms will become more sophisticated and easier to use.

Erin, over the next three years, what are your company’s biggest challenges?

Knight: I would say the uncertainties surrounding tariffs, global currency fluctuations and political influences. And keeping our brand relevant, because the pulse of fashion is fast.

Where is your talent coming from as a pool?

Hashem: For us at MDVIP, it depends on our goals. We’ve had trouble in the past when we were trying to fulfill newly created roles, like when we needed a leader in digital marketing. “Who could really play that role to get us where we needed to be?” we wondered. At the time, we didn’t find what we were looking for, because that industry was so nascent and up-and-coming. We had to reach outside our local market to find someone. Other than that, I feel like because of the business concentration in South Florida, that we’ve had a good pool of talent that we can source from.

Sol, what does AI mean today?

Rashidi: I am not a fan of the words “artificial intelligence.” I prefer “augmented intelligence,” because I don’t think there’s anything we are doing that is artificial. You see movies such as Blade Runner, Space Oddity [and] I, Robot, and it gives you this romantic vision of what AI is in its robot state of the world. I think there’s a lot of hype and I don’t buy into it. The fact is our statisticians and our computer science majors are our new data scientists. The practice has existed, but what has finally caught up is the computing power.

Cyberthreats in your business? What are you seeing?

Stone: For those who think you have an insulated cybersecurity structure, I recommend that you have your company do a double-blind test. That’s where you hire, say, a company like Deloitte. And you don’t tell any of your security people about what’s happening. They’ll do tests, like seeing if they can connect to your phones, network, etc. When you think you have a security system and when you run this test, you’ll have an ability to understand where you’re vulnerable. I think the truth is, no one actually does.

SFBW is the exclusive media partner for the executive-level luncheon. For tickets, visit sfexecroundtable.com.♦