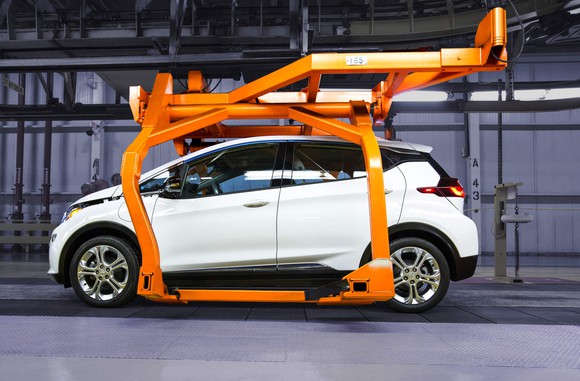 Ask a Fool: What Stock Should You Buy Next?

If you’re looking to invest right now, which stock is your best bet? Find some answers here.

Investing is all about picking the best time to buy the best stocks. But when there are so many prospective investments to choose from, it can be challenging to decide which stock you should put at the top of your shopping list. To help make your decision a bit easier, we’ve presented three stock ideas that you can consider for your own portfolio. Take a look at all three ideas and see which one you think fits best with your own investing goals.

John Rosevear
Do you like companies with strong balance sheets, savvy management teams, a good plan for bottom-line growth, and a fat dividend yield?

If so, you might want to take a close look at General Motors (NYSE:GM). Yes, really!

GM has come a long, long way from the dark days of 2009, when it famously crashed into bankruptcy court after years of mismanagement. GM’s bankruptcy experience allowed it to shed tons of debt and excess capacity, and the good work it had already started doing to improve its products and cost structure gained speed quickly.

The upshot is that today’s GM has a rock-solid balance sheet, high credit ratings, and thick profit margins, along with a solid dividend yielding 5.1% at the moment. Despite all of this, its stock trades at less than 5 times earnings. This makes GM an intriguing portfolio candidate, not least because this old industrial giant is well-positioned to boost its bottom line significantly: CEO Mary Barra has the company on course to make big improvements over the next several years, while matching or beating potential Silicon Valley disruptors at their own game.

Barra’s plan to boost GM’s profits and margins by early next decade has several parts, including an overhaul to GM’s long-troubled European operation; a serious, well-funded effort to turn Cadillac into a global luxury-car powerhouse; and an aggressive push into advanced technology and alternative forms of “personal mobility” that has already put GM at the forefront of the major changes coming to the auto business.

Long story short: More than most automakers, GM is walking the talk of transforming into a 21st-century provider of personal mobility. It’s already surging ahead in the race to a self-driving car, building its own ride-sharing business, and taking big stakes in mobility innovators like ride-hailing service Lyft. Meanwhile, its core business is booming, and its quality has never been better. What’s not to like?

Dan Caplinger
Certain sectors come in and out of favor over time, and the financial industry has been suffering a downturn over the past year. Uncertainty about the health of the economy and the future direction of interest rates has held back shares ofWells Fargo (NYSE:WFC) and other big banks. Yet in the case of Wells Fargo, the resulting bargain prices create a tempting opportunity for value-seeking investors.

Wells Fargo is arguably the strongest banking franchise in the U.S., but its stock trades at less than 11 times forward earnings estimates. It carries a dividend yield above 3%, and the bank’s focus on the domestic market for mortgage, credit card, and business loans has worked well because of the U.S. economy’s outperformance compared to that of the rest of the world. With a solid margin of 2 to 3 percentage points between its return on equity and its cost of capital, Wells Fargo’s fundamentals are not only healthy, but outstanding among the biggest banks in the nation.

Until the Federal Reserve clarifies what’s ahead for interest rates, big banks like Wells Fargo will face some challenges in planning for the future. However, Wells Fargo has handled tough situations before, and the pessimism that the current stock price reflects seems unwarranted to those who recognize the success of the business model that the bank has followed for decades.

Neha Chamaria
The precipitous fall in fertilizer stocks in recent months has offered up some amazing opportunities for long-term investors. Right now I particularly like The Mosaic Company (NYSE:MOS), one of the world’s leading producers of two key nutrients: phosphate and potash.

While Mosaic’s valuation appears attractive, its business has equally compelling long-term prospects. The fertilizer markets may not be in the best shape right now, but fertilizer remains an integral agricultural product that boosts crop productivity — something the world will need to fall back on as the global population grows.

Even in these challenging times, Mosaic remains cash-flow positive and has maintained an operating margin of well over 10%. Mosaic’s dividends also appear safe for now, considering that it paid out less than half its net income and free cash flow per share in dividends last year. Comparatively, Potash Corp paid out its entire profits and more than its FCF as dividends, forcing it to cut its quarterly dividend earlier this year. Mosaic is currently fetching investors a juicy dividend yield of 4%.

Even if the fertilizer industry doesn’t grow at exponential rates going forward, demand for nutrients should remain strong. As one of the top fertilizer players out there, Mosaic makes a great choice for the long haul at current prices.