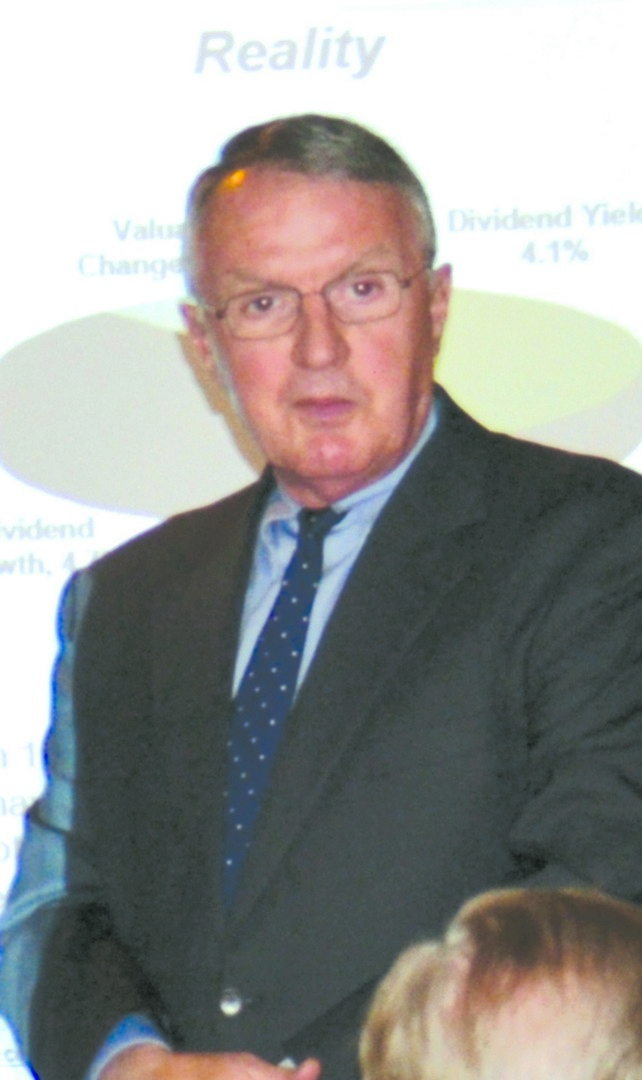 Walter C. Bean says he gets distressed when he reads investors shouldn’t spend more than four percent of their portfolio or they’ll run out of money.

He’s come up with a 5/5 strategy – seeking a 5 percent dividend and 5 percent in growth to get a 10 percent annual return.

Bean says his approach emerged in the wake of the tech stock crash when many investors lost half of their money by investing in companies that had no earnings and no dividends.

“You cannot fake a dividend,” he says.

Bean is a manager of $23 billion at investment giant Federated, including $9.38 billion in the Federated Strategic Value Dividend Fund. Bean made a presentation on his dividend-oriented strategy at an event sponsored by Coral Gables Trust, which offers wealth management services with Federated’s dividend strategy approach.

Bean says he realized there’s a stereotype that slow-witted people are in dividend stocks, while the fast-witted are in growth stocks. In five of the last eight decades, though, investors have lost money when it comes to investing based on stock prices.

Looking at the S&P 500 since 1957 finds the best of five tranches was composed of high-yield stocks. The best stock overall was tobacco company Phillip Morris (now known as Altria Group), a non-cyclical business with headwinds that included ads banned from TV, Surgeon General warnings and litigation. The company’s profit pool was tenaciously defended despite all of its issues, Bean says.

Altria pays out 90 percent of its profits in the form of dividends, according to Morningstar data on Yahoo Finance.

Altria (NYSE: MO) has seen its share price rise from $20 in 2010 to nearly $50 recently. It has a 5.8 percent dividend yield over the past five years, according to the Morningstar data.

A lot of companies that investors thought were growth stocks aren’t even around anymore, he says. Bean didn’t mention current growth stocks by name, but his comment came after investors hit the share price of Amazon, which isn’t showing profits as it keeps reinvesting in its business.

Bean did talk about Coca-Cola, which regularly raises its dividend and has climbed from $25 a share in 2010 to near $45 recently. Coca-Cola has a five-year average dividend yield of 2.89 percent, according to Morningstar. Coca-Cola also has a beta of 0.66, which means its two-thirds as volatile as the market as a whole.

“When you get half your return in cash your volatility is much lower,” says Bean, who likes companies that consistently raise their dividend.

In recent years, Bean’s dividend strategy has been challenged due to the low payout for dividends. Historically companies pay 60 percent of earnings out in cash, but these days it’s 30 percent. In 14 of the last 15 years, companies have decided to spend more money on share buy backs rather than improving dividends, Bean says. Buybacks are designed to show management thinks a stock is cheap, but Bean says too often they are made at high price levels.

In contrast to the U.S., there’s less emphasis in the United Kingdom on what Bean calls financial engineering. The average dividend return there is 4.5 percent. Bean has about 24 percent of his investments in the UK and mentioned well-known companies that include Unilever, Royal Dutch Shell, BP and Glaxo Smith Kline.

Most of the turnover in Bean’s portfolio occurs when a stock price has had a good run, which means its dividend yield has dropped. His strategy is to redeploy the money in a company with a good dividend yield.?