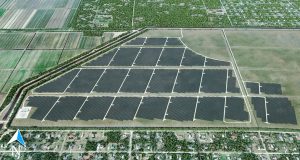 NextEra Energy is the global leader in solar and wind power generation, but now its Florida Power & Light Co. regulated utility is making the state a leader in solar energy production, too.

While those plants are sprawling, FPL also has state approval for programs that embrace retail consumers.

An October ranking of U.S. solar developers by Energy Acuity had NextEra Energy Resources as the largest utility conducting developments with 56 projects. FPL was ranked 15th with 12 projects. The list is led by First Solar and Sun Power, which aren’t utilities, while Next Era was third.

A Wall Street Journal article concluded that a 2017 SEC filing by NextEra (NYSE: NEE) was indeed accurate—the company produces more solar and wind power than another other company globally. 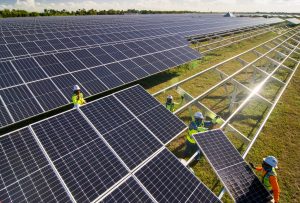 FPL has become increasingly green in the last decade. In addition to building solar farms, it has imploded fuel oil power plants in Riviera Beach and Port Everglades, and turned them into plants that burn natural gas, which is less polluting.

The Florida Public Service Commission in December approved a one-year extension of FPL’s Voluntary Solar Partnership program. The program, branded as FPL SolarNow, offers all FPL customers an opportunity—for $9 a month—to participate voluntarily in the construction and operation of solar generation facilities.

Customers, who can enroll or cancel anytime, expand the use of solar in their communities, without the upfront costs of installing solar systems on their homes or businesses, the PSC said in a news release. As of August 2018, 36,024 FPL customers were participating.

FPL is developing a second customer participation solar program called “Shared Solar,” the PSC said. If approved by the PSC, customers will be able to buy a subscription for a fixed monthly amount of solar power to be generated by FPL, and will be eligible for bill credits reflecting the savings created by those solar projects.

As for the larger energy center projects, FPL in February completed the installation of almost 300,000 solar panels at the Miami-Dade Solar Energy Center in West Kendall. The center can produce enough power for 15,000 homes. 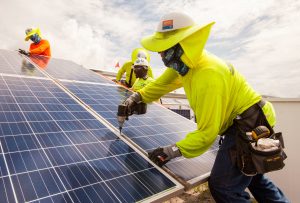 “The construction of four additional solar energy centers is just the latest demonstration of our laser focus on advancing solar energy for all of our customers, while keeping their bills lower than 90 percent of the country,” FPL President and CEO Eric Silagy said in a news release. “These solar plants are part of our commitment to installing 30 million more solar panels by 2030 across more than 100 new solar sites, resulting in the creation of thousands of jobs here in our state.”

Florida ranked second in the nation in 2018 in solar employment, behind California, according to a recent report by The Solar Foundation. The Florida Department of Economic Opportunity projects solar jobs to grow by more than 60 percent through 2026, compared to statewide job growth of about 10 percent.

At peak construction, each FPL solar plant employs about 200 workers, the company says. FPL estimates that about 3,000 jobs have been created since 2016 when the company embarked on one of the largest solar expansions in the country.

Each of the new FPL solar plants will be capable of generating 74.5 megawatts of power from the sun, for a combined addition of nearly 300 megawatts of new solar capacity—enough to power about 60,000 homes. FPL says the new solar plants are being built on a cost effective basis and will bring an additional $26 million in net-savings to FPL customers over the long-term.

The new solar plants were hailed by government and economic development officials in FPL’s announcement. Here are the details on the plants:

The new solar plant will be FPL’s largest installation to date in Palm Beach County, where FPL and NextEra are headquartered. The plant will be adjacent to the new city of Westlake, a 4,500-home master planned community. Media accounts indicate FPL spent $10 million to buy the site from developer Minto Communities.

“We’re fortunate to have a world leader in renewable energy located right here in Palm Beach County,” Kelly Smallridge, president and CEO, Business Development Board of Palm Beach County, said in the FPL news release. “FPL’s ability to deliver some of the cleanest and most affordable power in the country is a major competitive advantage that helps us attract businesses to our area.” 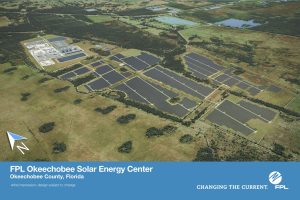 The new solar plant will expand FPL’s clean energy footprint in Okeechobee County, which will also soon be home to the FPL Okeechobee Clean Energy Center. The natural gas power plant is projected to be the cleanest most fuel-efficient power plant of its kind when it begins serving customers next month.

“FPL’s investments in clean power generation continue to be a game-changer for our county,” said Jeff Sumner, president, Sumner Engineering & Consulting and chairman of the Economic Council of Okeechobee County. “Investments like these provide a vital injection of economic activity to our area and help support our local community for years to come.”

Visible to thousands of drivers traveling Interstate 10 every day, the new FPL solar plant will be the largest solar installation in Suwannee County to date.

“FPL’s solar investment is an ideal fit for our community as it supports the growth of clean tech and ecotourism—two industry sectors that provide for a diversified and sustainable regional economy,” said Jimmy Norris, director, Suwannee County Economic Development. “And its location will help us advertise that Suwannee County is playing a role in Florida’s transition from the Sunshine State to the Solar State.”

FPL’s second solar plant in Manatee County will join the FPL Manatee Solar Energy Center, which was built in 2016 and started the company’s unprecedented solar expansion.

“It’s exciting to continue to be a part of what FPL’s solar expansion is doing for our state,” said Manatee County Commissioner Priscilla Whisenant Trace. “We know firsthand the benefits a solar plant brings to our community and look forward to the additional economic and environmental benefits, including more green energy and jobs, another solar facility will bring to Manatee County.”

“Our partnership with FPL has resulted in solar sites that incorporate environmentally responsible features, such as native plants that benefit Florida’s birds, wildlife and pollinator species into the design of the solar plant,” said Julie Wraithmell, executive director of Audubon Florida.