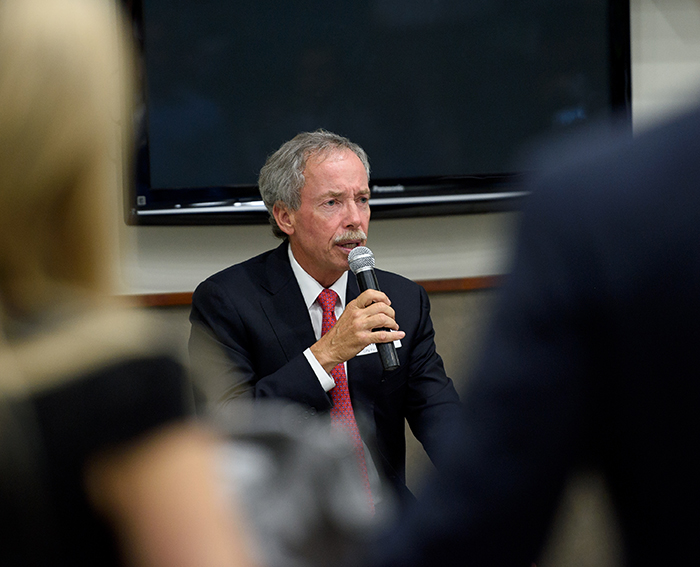 Keith Koenig is the president of a furniture powerhouse that has 26 showrooms under two brands, City Furniture and Ashley Furniture HomeStores. City Furniture evolved from Waterbed City, which was started in 1971 by Keith’s late brother, Kevin. In 2014, the trade publication Furniture Today ranked City Furniture No. 30 on its Top 100 list of U.S. retailers.

Koenig is active in many South Florida community organizations and is past board chair of the University of Florida Foundation. He has received both local and national recognition, including the Ernst & Young Entrepreneur of the Year Award, the UF MBA Outstanding Alumnus Award and the Furniture Retailer of the Year Award.

Koenig was interviewed by SFBW chairman and CEO Gary Press during a live CEO Connect event at JM Lexus in Margate. The presenting sponsor for CEO Connect is TD Bank.

The following transcript has been edited for length and clarity.

I understand your family moved here from New Jersey, which is where I’m from. Were you born there or down here? Are you a Springsteen fan?

I was 10 years old in 1961 when we moved to Fort Lauderdale, right off of Commercial Boulevard. I remember it was a two-lane road and I would get sand spurs walking to Floranada Elementary School… Of course, who isn’t a Springsteen fan?

Tell us about your brother coming up with the concept for what was then Waterbed City back in 1971.

It’s a classic American success story. Mom and dad were lower-middle class; Mom worked in Jordan Marsh in the dress department, dad ended up working for National Car Rental. Money was tight and we were the type of family that if you wanted something, you would go out and get a job and work for it.

Kevin was not a good student in high school. He was one of those C students. He got into trouble once in a while. He went to Broward College and then to FSU and started studying business and got really engaged. He was a natural businessman. He came back to FAU and got an MBA. He worked his way through FAU as a bellman and saved four or five thousand dollars. He then opened a small waterbed store.

What do you think the family said? “Are you crazy?” of course. I joined him in 1972 and we became partners in 1975. You eat enough peanut butter, save every penny and work unlimited hours, there’s not much you can’t accomplish.

What was your role initially and how did it evolve?

We were very complementary. Kevin was more back room. I was more sales and marketing. We attracted some good folks. We worked well together. We fought like cats and dogs at some times; that’s nature. He owned a little more than half the business.

How has your Catholic faith helped in dealing with adversities, such as the death of your brother?

The sad story is that just over a month ago, my wife of 37 years passed away after 22 months of breast cancer. We were with her every step of the way. Over time, we allowed the good lord to come in our life. It was very important. Over the past two years, it has been a foundation for putting life into perspective. Losing a spouse without faith would be very difficult – even with faith it’s difficult. She is the angel on my shoulder and I look forward to seeing again her some day. She doesn’t want me to mope. My brother doesn’t want me to mope. We are going to have another grandchild. We are going to make a great future for our family, our company and all of our friends.

I understand you chaired a committee that raised $111 million for the Archdiocese of Miami and you received the St. Gregory the Great Award from Pope John Paul II. Tell us about your charitable work.

Most of our charitable work didn’t stream from anything other than a willingness to accept some responsibility. I remember our kids were 2 and 4 and our friends said, “You ought to go to the Discovery Center.” We took our kids down there and they loved it. Next thing our friends asked: “Do you want to be on the board?” And the next thing: “We are going to build a new museum – you gotta do this and that.” Then, we built a $37 million museum. Along the way, we have developed so many friends. That’s how you build a community. We are not stars or anything; we just tried to help out when we could.

One of the remarkable things about City Furniture is how it has been able to evolve and innovate. I’d like to hear about the big decision in 1994 to go from Waterbed City, which was a well-known brand, and turn it into City Furniture.

Every business has to face change. The waterbed business started to tank… Anybody pass by a waterbed store lately? People were coming into our stores saying, “We are getting a regular mattress.” We decided to reinvent as City Furniture.

One of the takeaways is that a lot of times, problems are opportunities in disguise. If the waterbed business had just grown a little bit, we never would have dealt with the need to reinvent our business. Now, our business is 10 times what it was.

In 2002, you began making furniture under the name Kevin Charles Upholstery, which was another innovation. Tell us about that.

When we started, everything was made in the U.S. Now, anything made with wood is coming from overseas, with very, very few exceptions. A lot of our suppliers were pulling out of the integrity of the product. I could make a sofa and put in an inferior frame with lesser-quality cushions. If I put on the same fabric, I saved a lot of money, and you wouldn’t initially know the difference. Six months from now, though, you’d think I was a potato head.

When we started in 1994, we would sell sofas for $499; today, we charge the same price, but it’s much better quality. If you do things responsibly, our team knows you get positive recognition, and people gravitate toward people they trust.

Tell me about the logistics strategy behind City Furniture. Your son, Andrew, plays a key role. And you have one of the biggest warehouses in South Florida. How many square feet?

Now that furniture comes from around the world, lead times are five or six months. We have to be very analytical about predicting trends and behaviors. We work very hard at having a global supply chain.

I spend a lot of time in China, Vietnam and Malaysia, but there’s not one time I don’t come back, get on my knees and kiss the ground. Most Americans have a vast under appreciation for how good our country is. There are so many good things going on in our country. There is an energy explosion, a creativity explosion, a manufacturing explosion. I am seeing fabrics that were made overseas being made in North Carolina and other places in the Southeast. I think the next five years are going to be a great five years.

How did you land the Bernhardt furniture line and how do you keep the other price points so reasonable?

We work at keeping the values really good; it grows volume. With more market share, we can deliver more on the trucks. Volume is our friend.

We put every penny we make back in the business. Every showroom is good except for Pembroke Pines where Tom Miller [of Miller Construction] has a $2 million project.

I am very good friends with Alex Bernhardt and we built stores that will show the Bernhardt furniture well. They are the best at high end. Their sofas are $1,499, so they are expensive, but they aren’t $4,000.

Is there any place you can buy a waterbed?

Believe it or not, I’m thinking about bringing them back. I think they would be a big hit. I still sleep in a waterbed and I still think it’s the best product. We have a factory in Mississippi and I know just how to do it. Charlie Hall is the original inventor of the waterbed and we are working on the project. Our kids are listening to our old music, so why not a waterbed?

How do you maintain and project the positive side to every challenge?

I do believe that the future is bright. I believe people are good. I believe the sun is going to come up tomorrow. I believe we have a land of freedom and opportunity. We have a fair rule of law – yeah, it could be better. We have a fair government – yeah, it could be better. But overall, I guess that everybody wants to come here. They want what you have. I think there is a lot to be positive about. There are so many good things going on. ?