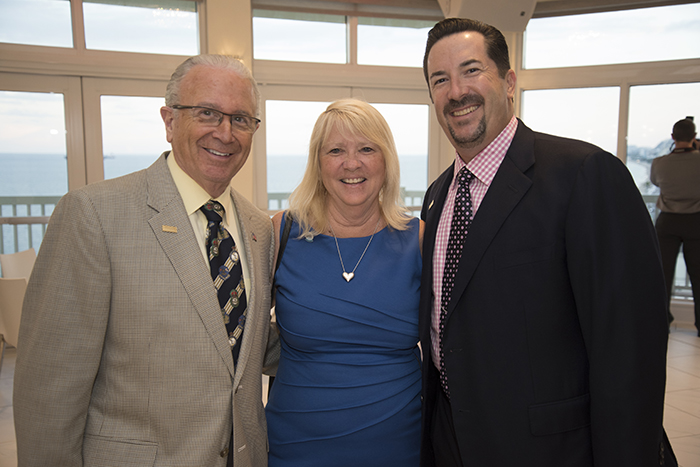 Bob Moss has a 46-year career in the construction consulting and management field, playing key leadership roles at Centex before founding Moss & Associates in 2004. Since moving to Florida in 1986, Moss has presided over notable projects such as:

” Atlantis Paradise Island and Our Lucaya in the Bahamas

Moss was interviewed in front of a live audience by SFBW Chairman and CEO Gary Press at the Pelican Grand Beach Resort in Fort Lauderdale. The CEO Connect series is presented by TD Bank.

The following transcript has been edited for length and clarity.

The Moss Construction logo includes a plumb line, which shows whether something is straight up and down. What does the plumb line mean to you philosophically?

Plumb line is not a term used in construction – plumb bob is frequently used in construction and it happens to connect with me a little bit. It’s a simple tool of accuracy, consistency and doing things right. It is used extensively in our business. It is one of the simplest tools, but sometimes simple is better and accuracy is always good.

You seem to have been born into the construction industry. I heard your father was in the business in North Carolina?

My father had a very, very, very small construction business. He did room additions to people’s houses. Coincidentally, he built the room addition to my wife’s family’s house – that’s part of how we met as teenagers.

I think the largest job he and his partner did was a two-bedroom, about 1,300-square-foot house.

Every summer, when I was about 12, 13 and 14 years old, I would go and work. I would pick up the trash and clean up. Pretty soon, I decided I could do more. I was hanging doors and doing wood floors.

When you and I were chatting on the phone the other day, you were talking about solar energy. Tell us about that.

Solar is here to stay. It is a great source of renewable energy. Peak demand in electricity all over the world is when the sun shines. Why? Because we are all up, working and using three mobile devices that connect to all these switching stations. They are power hogs, so they are getting pressure to produce renewable, clean alternative energy. Solar farms are perfect.

We were invited by Florida Power & Light to help supervise someone they hired to build a solar farm project on the West Coast that was making a blunder on it. We took over the job – about 100 acres. That’s the one President Obama went to five years ago. Then, we went to Martin County and took over another job. We have done 1,344 megawatts of DC power – that’s enough to power 250,000 homes. We have done them all the way from California to Florida.

If you go by our office on Andrews Avenue, you will see we have a solar canopy, for which we got a tax credit; it offsets our daily consumption of electric power.

You didn’t necessarily have take the easy street to adulthood – your father died and you worked your way through Central Piedmont Community College. How did that shape you?

Whether you are cutting meat in the evening after high school, working in the vegetable department at a large shopping center or working at a plywood finishing plant or with Westinghouse, it is a great learning opportunity. If you look at it with energy, enthusiasm and learning about something… there are many lessons learned at each and every one of those jobs, no matter how insignificant it might be today.

You started in North Carolina and then traveled all over the place and grew in this company before Centex?

I went to high school and technical college in North Carolina. I was lucky enough to walk into the HR department of a very large worldwide construction company. I was filling out an application and the vice president of HR walked in and said, “What are you doing young man?” I said, “I’m filling out an application.” And he said, “Come in here and I’ll talk to you.” I don’t know what I said, but he liked it and I got hired. I worked on a large shopping center and a big newspaper facility.

Sandy and I got married and we had a baby named Chad. Most of you know him, he’s the most popular Moss.

They said they needed somebody to go to Ponce, Puerto Rico, to do a job. We stayed there 13 months. It was a successful project, demanding, and a lot of crazy things happened, but we made a bit of money.

I went to Allentown and Danville, Virginia, before we moved and bought our first house in 1973 in Pensacola – a large estate for $27,000. After three years, we finished that project (one of the first projects I had a major role in managing) and went to Washington state with the same company to a big nuclear station. Then we went to Denver and left that company and went to Nashville, Tennessee, to a company that became Centex; I was there 25 years.

Was wanting to work more closely with your sons a primary driver for leaving Centex?

That was something that my sons and I rejoice about. Chad had determined he would be a stockbroker; Scott thought he would be a Topgun naval aviator. Chad went to Barry to get an economics degree and Scott was accepted into the Naval Academy. After two years at Barry, much to my surprise, Chad said, “I’m not going back to Barry. I’m going to FIU to study construction risk.”

Scott went through all these qualifications to get accepted at the Naval Academy. They wanted him to play football. He went through the physical and they said he’d never be a naval aviator because his vision wasn’t good enough. That sort of broke his bubble big time. He went to the University of Florida and met a bunch of folks who work for us now who were all taking building construction courses. He said, “I like these guys. I want to get a building construction degree.”

Things work out differently than you expect, but as far as I’m concerned, it’s wonderful.

You’ve done a lot of work for Disney over the years. What’s it like to work for Mickey?

I feel very blessed to have been involved with them from 1986 to 2002. Disney had a reputation that almost no contractor did more than one job. It had a habit of having a large, large team of engineers and architects. Then, in addition to that, they had Imagineering – a large group of folks who showed up every day on every job to look at what you are doing and say, “How can we make this a better client or visitor experience?”

If you are building this room and someone comes in and wants to change it when you are about ready to paint, it can be a little discouraging – especially if you are already behind schedule.

I made a point of getting to know the top guy at Disney [Bob Iger]. I said, “We are not going to survive unless we trust each other. We have to figure out how to get our teams to work together. You give me answers so I can pour the concrete and do the drywall and do all these things you want done and done fast.”

Every other week I flew to Disney. If I said, you need to do this, this and this, it would be done the next day. If he said to me it needed to be done, I would say the same thing.

What are some of your favorite and most challenging projects?

I don’t know if I can name my favorite. The whole Disney experience – 22,000 hotel rooms and the success we had in satisfying them – is clearly special. Others:

” Atlantis: $100 million in work in 11 months – the original conversion in 1991. Nobody else was willing to tackle it. I met with the prime minister and said, “If you’ll help us, we’ll do it.” He said, “You call me any time.” We formed a great relationship with him and pulled off a miracle.

” The $250 million Lucayan in Freeport, Bahamas.

” One of our highest-quality projects is the Gonda Building at the Mayo Clinic: It’s a beautiful building with Chihuly fixtures.

” Nova Southeastern University: The day before my noncompete expired, they awarded us a $50 million job; we went on to do $200 million. We did a partnership with Miller Construction and that was very successful.

” Marlins Park and the BankAtlantic Center [now BB&T Center]. We knew Wayne Huizenga for many years and he called us and said, “Can you build a hockey arena?” I said sure. He said, “Don’t screw me. We’ll worry about the details later.” That was Monday; he said, “Thursday I want you and your top two people to accompany myself and top three people from my design firm to look at the last four hockey arenas built in the nation – and you are going to tell me how to do a better one. And we did. It’s the best in the nation.

I understand Watsco has had a tremendous run in performance as a stock over the years. Tell us about that and what was the key to that happening.

Watsco is the largest distributor of heating and air-conditioning equipment in the world – 600-plus locations coast-to-coast in the U.S., Canada, Mexico and the Caribbean. They buy a piece of equipment from a manufacturer, store it in their warehouses and sell it to about 9,000 air-conditioning contractors. That’s a pretty simple business, but there is $35 billion of that kind of work done in the U.S. every year. Watsco is doing $4 billion, so they still have a lot of headroom.

When I went on the board, Watsco had a tiny piece of that business. The chairman is a smart guy I met in the Young Presidents” Organization. He wanted a contractor engineering mentality as part of his board. It’s been a wonderful ride since 1992. He has grown that business tremendously by buying regional mom-and-pop companies all over the United States. He does something a lot of big companies making acquisitions don’t: He honors the people who made it successful. Of the 12,000 companies on the NYSE, it’s in the top 25 of financial performance – that’s in stock value increase and dividend appreciation. ?