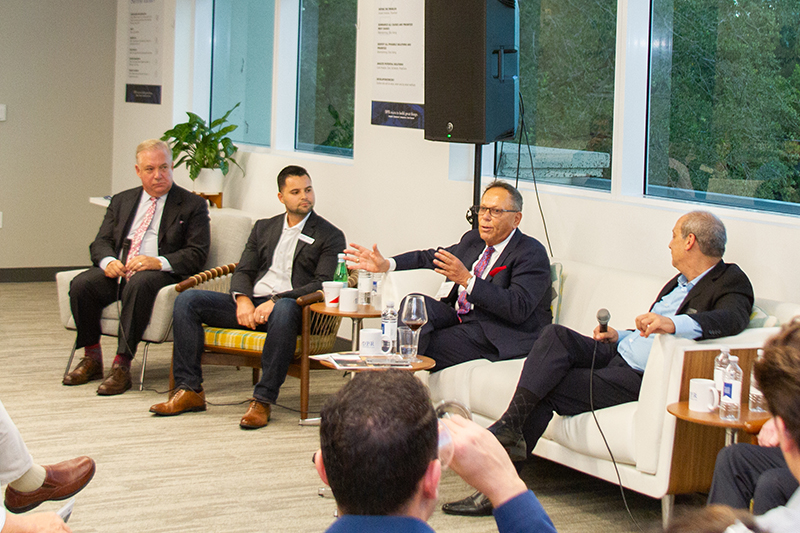 Innovation is the remedy for high health care costs

Health care costs are taking up 19 percent of the nation’s gross domestic product, but innovative companies in South Florida are trying to change that.

SFBW’s “Innovative Solutions in Health Care” event featured a leader in telemedicine, a new site to help consumers compare costs, an industry compliance expert, a health care facilities contractor and the chief operating officer of Cleveland Clinic Florida. The commonality among the panelists is how they are trying to create efficiencies in the health care field that will help hold down costs and improve patient outcomes.

The event was hosted in Fort Lauderdale at the offices of sponsor DPR Construction, which serves many of South Florida’s most prominent hospitals.

In 2008, Randy Parker saw parallels between health care and how movie studios once relied on physical distribution via videotapes—until the internet provided a virtual distribution solution. He founded MDLive to provide virtual health care (online appointments with doctors) for low-grade conditions. MDLive patients pay $59 or less, depending on their insurance, for 50 routine medical conditions, such as colds, allergies, fevers, the flu and headaches

Other specialties include psychiatry, dermatology and counseling, which have different pricing.

MDLive is the nation’s largest telehealth provider, with services for 30 million members throughout the United States. In August, the company closed a $50 million funding round led by two of its partners, health care insurance companies Cigna and Health Care Service Corp.

When he started MDLive, Parker perceived the health care system as broken, but nonpatient stakeholders were happy because the system was extremely profitable. Fast forward 10 years, and 2018 is finally creating the perfect storm for change, propelled by technology, reimbursements and consumer demands.

MDLive helps make care more efficient, and physicians can spend less time on things that can be done through technology, he says.

Another example of technology is the latest iteration of the Apple Watch, which can warn users about potential atrial fibrillations or check for signs of Parkinson’s disease, Parker says.

“With accurate continuous monitoring and the right care team and specialty organizations that patients could be referred to, we have become highly efficient,” he says.

Vertical integration will become a factor in making health care more efficient as well, he says. One example is Amazon buying PillPack Pharmacy, which provides presorted medications for patients. Another example is drug store giant CVS Health Corp. seeking approval to buy Aetna, one of the nation’s largest health insurers. And Cigna is starting a $250 million venture fund.

Benjamin Frosch, the principal of Frosch Medical Compliance, says the No. 1 pressure on health care was created by the Medicare program, because Americans live longer now than when the program started in 1965, thanks to better technology and pharmacology. While that’s great for the public’s health, it has put Medicare under severe financial stress. He expects technology and pharmacology to continue making jumps in improvement over the next five years.

Frosch expresses concern about the number of doctors choosing to be specialists rather than general practitioners, who earn a lot less.

One game-changer is the New York University School of Medicine, which has announced a tuition-free program for its students, Frosch says. Cutting student debt will put less pressure on graduates to pursue specialty medicine to pay off loans.

Frosch says the audience he sees during lectures at medical schools also has become a female majority, which is important because they are spurring changes.

Osmel “Ozzie” Delgado, chief operating officer for Cleveland Clinic Florida, called telemedicine a disruptor in U.S. health care and indicated change was needed from a financial perspective. While the country spends nearly one-fifth of its GDP on health care, “when you look at outcomes and quality of care of outcomes, it doesn’t translate to getting the quality and outcomes you should get when you spend that much,” he says.

Health care needs a shift from sick care to wellness maintenance, and systems need to provide a continuum of care, he says.

The average consumer is spending $4,000 a year on health care and can’t tap into some benefits because of high deductibles. As a result, they are turning into price checkers. The question ahead is which providers will be able to deliver quality care at affordable prices.

“I think the disruptors are great. I think what we are doing is great. We have an express care app, a 24/7 app, where we can provide primary care physicians,” he says.

Patients want care delivered in the most convenient way possible, Delgado says: “You don’t need to drive and get in your car and have an appointment at 2 p.m., spend 10 or 15 minutes looking for parking, register and spend 30 minutes waiting, then six minutes with the physician.”

Delgado said one problem with the current health care system is it incentivizes sick care. “If we incentivize well care, you bend the curve,” he says. Cleveland Clinic discovered that with its own self-funded insurance program. It incentivizes employees to use exercise programs and compliance with cholesterol and hypertension medicine.

The Affordable Care Act has helped bend the cost curve, but the pharmaceutical industry—with its powerful lobbyists—is still a challenge, says Delgado, who is a licensed pharmacist.

A wave of mergers is happening among hospitals, such as Baptist Health’s acquisition of Bethesda and pending partnership with Boca Raton Regional Hospital.

Frosch says more than 30 percent of hospitals in the nation operate in the red, and mergers can help provide operational efficiencies. “The days of the single standalone hospital is a dying breed,” Delgado says.

Cleveland Clinic also had pursued a deal with Boca Raton Regional after previously buying Indian River Medical Center in Vero Beach. It also announced an affiliation with Martin Health System for cardiology and heart surgery. A big allure for partnerships is Cleveland Clinic’s 23-year No. 1 ranking from U.S. News and World Report for cardiac care.

Adrian Barrios, construction manager for DPR Construction, said micro hospitals are being created in states that don’t require approval for new hospitals. They can offer 90 percent of the care that a major hospital would, generally short of complex procedures.

Delgado says the hospital of the future is going to be an acute, critical-care hospital. An outpatient boutique hospital will handle hip replacements while complicated procedures like heart and liver transplants will still be held in hospitals.

Michael Swartz, president of MediXall, explained how his company allows consumers to use their smartphones, tablets or consumers to check out their health care providers and cost of services, such as imaging centers, to provide more transparency on pricing. Swartz says consumers look to models like Priceline and Expedia as to how they want to do business. Eventually, he expects to provide patient reviews like how consumers have reviews on Yelp.

Swartz says some people spend more time price checking things like carpet cleaning than seeing whether there is a more competitive price for a medical procedure. He adds most health care plans have cost comparison tools, but few people use them.

Consumers have no idea about to shop, so MediXall’s approach is to handhold them through the process. It’s currently focused on radiology diagnostic procedures, so doctors and patients can know how to find great care at lower prices.

Patients are led by their nose, Frosch says. “You are told where you are going, and you just go. Very few people in 2018 will get another opinion, and that’s pathetic.” ♦