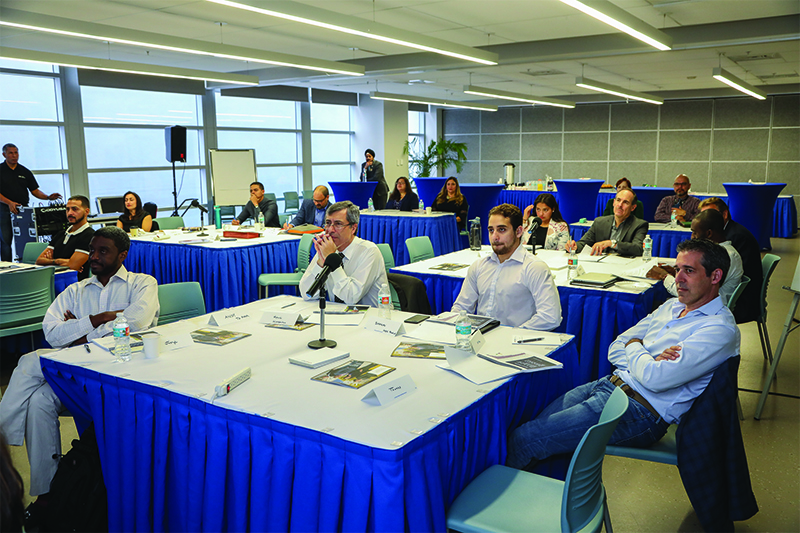 Keys to Success for Entrepreneurs

SFBW was the media partner for the September CEO Leadership Forum at Miami Dade College. Among the key topics were sales organization and how to avoid failure. For information on the forums, visit ceoleadershipforums.com.

Can you handle the truth?

Attorney William Mueller gave a presentation right out of Hollywood to drive home the point about why startups fail, which was exemplified when he showed the famous movie clip from “A Few Good Men,” where Jack Nicholson’s character yells at Tom Cruise’s character that he can’t handle the truth.

Unfortunately, too many entrepreneurs don’t identify the truth and act on it, said Mueller, who has honed his skills leading the management consulting practice at Kelley Kronenberg and holding executive business positions.

The answer was investing millions in Theranos, a blood-testing company that was a Wall Street darling and was once valued at $10 billion. Now, it is being liquidated for the benefit of creditors.It said it had technology to do many blood tests with just a finger prick, but the company hid that it wasn’t working well. Founder Elizabeth Holmes was once feted as the next Steve Jobs, but now she and her husband have been charged with fraud.

• Companies don’t recognize their most important asset might not be on the balance sheet: Mueller told an anecdote about a consulting job where he spent all day with the CEO, going over a litany of problems, including a cash crunch and investors threatening lawsuits. (His discussion was illustrated by a slide from the “Transformers” series, with explosions going off.)

Mueller was surprised to hear the CEO was going to talk with a $1.4 billion telecom company that was interested in a deal. “How come we haven’t talked much about that?” Mueller asked. “Well, I wanted to focus on the problems that are causing stress,” the CEO said.

“That’s your silver lining. That wasn’t on your list,” Mueller told him.

• Some people like the idea of being an entrepreneur, but they have no idea how to make business decisions: Mueller introduced this topic with a slide of Elon Musk, the serial entrepreneur who has been involved with PayPal, Zip2, SpaceX and Tesla.

Even though Musk is a visionary, he stumbled recently with a tweet about taking Tesla private, which prompted an inquiry from the U.S. Securities and Exchange Commission. Musk changed his mind and the stock dropped. He paid a $20 million settlement to the SEC and gave up his chairmanship.

• The business has a product/service the market demands, but there is a fatal flaw in the business model: Mueller told about visiting a company that was running low on cash. He asked a salesperson how many sales he could close in a week. Zero. Next month? Zero. The problem is the company’s sales cycle was so long that it was destined to run out of money eight months after investors had put in $1 million.

• Lead executives and business owners wait too long to seek help: Mueller talked about how Walgreens was anxious to make a deal with Theranos to put testing labs in its stores, fearing that rival CVS would cut a deal. A Walgreens laboratory consultant asked great questions and said things didn’t look right, including being denie access to Theranos’ lab.

If your company is struggling with sales, you need to take a look at whether you have the right building blocks, says Brian Berkowitz, principal of Blue Ocean Sales Strategies, which is powered by Sales Xceleration. Berkowitz ticked off some quick statistics about what’s going wrong and why:

• Half of companies haven’t had anyone travel with their sales representatives on a call in the past 12 months. Salespeople tend to give the brightest picture back to their managers. Going on calls gives the owner and sales manager insight into the clients’ perspective, such as whether the product meets needs.

• Six out of 10 companies don’t have individual sales quotes. If a salesperson doesn’t know how success is going to be measured, it’s difficult to tell them later they haven’t done a good job.

• Eight out of 10 companies don’t have a sales forecasting tool/process. It doesn’t have to be a fancy customer relationship management tool, but it needs to be better than the owner just hoping to do better than last year.

• Eight out of 10 companies haven’t performed an annual performance review on their sales reps in the past three years. Without a review, you don’t really know how the reps are doing.

• Nine out of 10 companies don’t have a CRM system. Having one is vital as a single repository for all sales activity. You can track activity and forecast business based on historical data on what percentages will close. From that you can create quotas for salespeople.

• Nine out of 10 companies don’t have a sales compensation plan that rewards the behavior they are seeking. You want to make sure sales reps are selling the products that bring the most benefit to the company rather than pursuing the path of least resistance.

Here are some of Berkowitz’s observations on common businessowner complaints and the dangers involved:

• We have a seasoned sales team. That can mean, “we have people who have been here a long time and they are resistant to change.”

• A lot of our annual revenue is from one client. What if that client is bought and they don’t need your services? No matter how good your business is, you need to be out there selling.

• I am uncomfortable with the sales team’s activity. You aren’t really sure what they are doing without quotas, and a CRM that shows daily activity.

• The sales team is improperly staffed. Sales teams must be led by an experienced sales manager. You need proper structures, such as outside salespeople (hunters) who get business, and inside salespeople (farmers) who take care of the clients.

• No defined sales process. Documents and procedures need to be documented. Define the checkpoints needed to get into the next step of the process.

• The compensation plan doesn’t correct behavior. If you set one up the right way, the more the salesperson makes, the more money the company will make. “A salesperson will do the least amount they can do to make the most amount of money,” Berkowitz says.

• No detailed sales business plan is shared with the team. The probability of hitting your goal is much greater if you have one. Plans should include targeted account lists with corresponding decision-makers, deadlines and accountability.

For entrepreneurs, Berkowitz says the happy result of having a proper sales organization is simple: “You don’t have the world on your shoulders anymore.” ♦