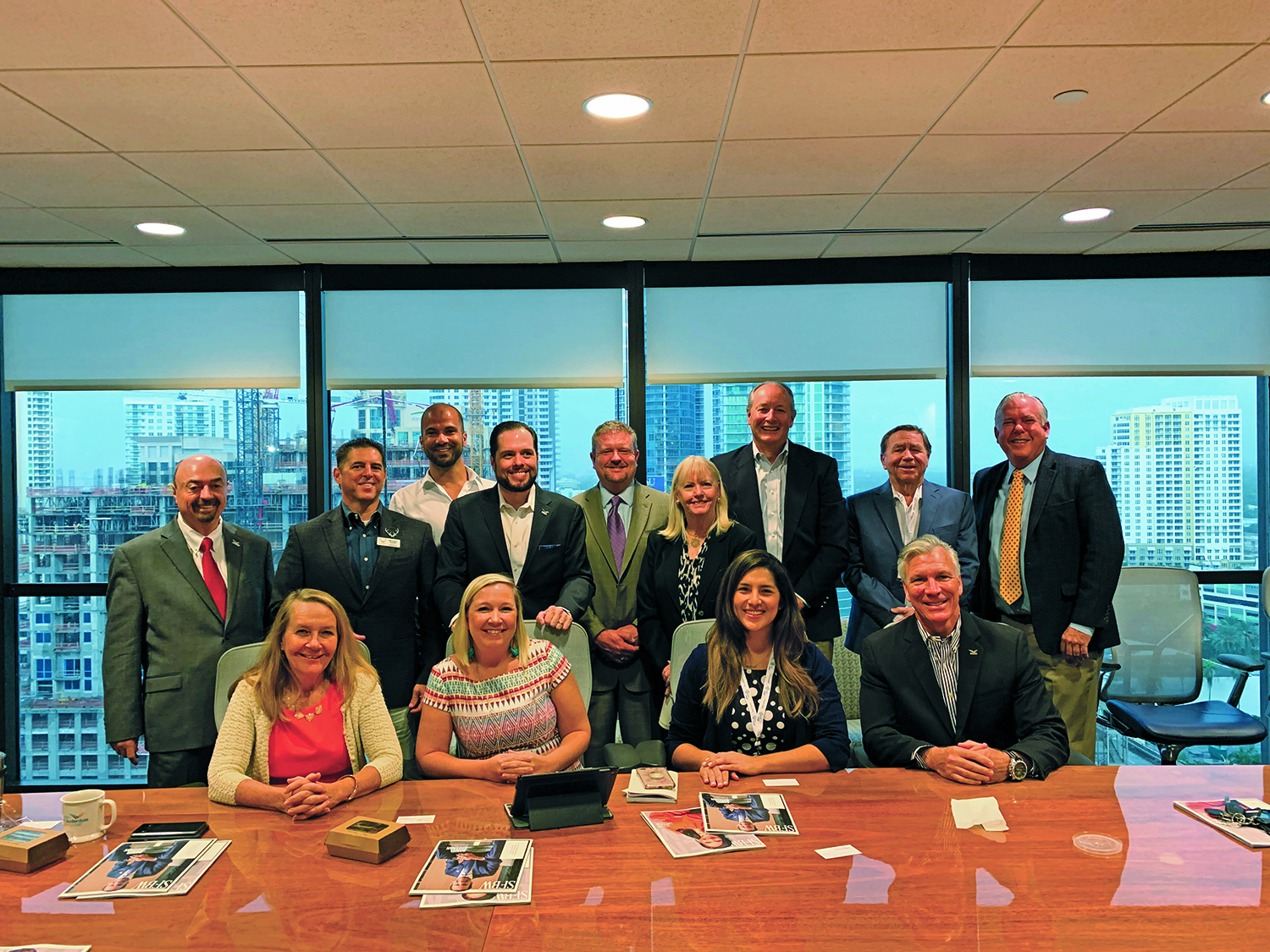 It sounds like something out of an episode of Modern Marvels.

A patient with chronic pain is heavily dosed with narcotics but, one day, learns about the Stimwave Freedom Stimulator system. A doctor injects a micro stimulator through a needle near pain points and the patient then uses an app and a wearable wireless device to combat the pain and cut back on the use of opioids.

Stimwave’s headquarters is tucked away in an office park off of Copan Road in Pompano Beach and provides an example of the growing life science cluster in South Florida.

Stimwave was among the companies featured in a roundtable discussion on the state of life sciences organized by SFBW and the Greater Fort Lauderdale Alliance. Earlier roundtables looked at the impact of corporate headquarters, technology companies and aviation companies on economic development.

The three industries on which the Alliance focuses under the life sciences umbrella are medical devices, pharmaceuticals and biotech, says Todd Holt, the Alliance’s director of business development and the former life sciences project manager for Enterprise Florida, the statewide public-private economic development partnership. He played a key role in recruiting the Torrey Pines Institute of Molecular Studies in Port St. Lucie and the Max Planck Florida Institute for Neuroscience in Jupiter.

The state made a major bioscience push under the administration of Gov. Jeb Bush, which brought major national bio companies to the state.

Stimwave started at Arizona State University and looked at that area and at San Diego for its headquarters, says Ron Perryman Sr., director of operations. “One of the reasons we chose to come here was because of the close proximity to Europe, so that we can deal from the east coast and have that time zone factor on our side. Also, being able to offer to our employees better housing at much more advantageous prices compared to some of the places in the West Coast,” Perryman says. He also cited the lack of a state income tax.

Panelists mentioned many other attractions for doing business in the region, including the weather, culture and educational institutions.

Stimwave.com says the company’s Freedom Stimulator is the smallest implanted stimulator system. The website has a referral form for patients to find a doctor trained in the use of the device.

Stimwave announced in October 2018 that it had the first FDA-cleared software that allows the AppleWatch to control a neuromodulation device implanted inside the body. This October, it gained publicity from Pro Football Hall of Fame member Joe Montana using its product.

“We are FDA-certified, and we help our patients kind of wean off from opioid usage,” says Marlene Peña, Stimwave’s people and development regulatory manager.

SHL Pharma, a unit of the giant SHL Group (Scandinavian Health Limited), started with two employees in Deerfield Beach in 2011 and has grown to 120, says Michael Hudak, director of human resources. It helps individuals with chronic illnesses medicate themselves with auto injectors that are designed, developed, assembled, packaged and labeled in Deerfield Beach for major pharmaceutical companies.

Ramin Rafiei, SHL’s director of digital health care, says the company has a trial in mid-Michigan that is helping produce precise metrics that allow patients to avoid clinic visits, which can be a lengthy process in rural areas.

Vigilant Biosciences, a medical device company in Fort Lauderdale, has raised $30 million for products that provide early detection of oral and oropharyngeal (throat) cancer. The technology is licensed from the University of Miami.

The products are available in select markets outside the United States. In 2017, Vigilant received a multimillion-dollar National Institutes of Health grant for a five-year study that is enrolling 300 mouth- and throat-cancer patients and control subjects. Institutions participating in the study include the University of California at San Diego’s Department of Surgery, New York University, Johns Hopkins University and the Greater Baltimore Medical Center.

DNA Labs International is an example of a homegrown success story. Chief operating officer Allison Nunes says her stepfather worked for the Broward Sheriff’s office, and he would complain about the lengthy time it took to do forensics. Her mother, CEO Kirsten Charlson, came up with the idea of starting a lab in 2004.

“We are better and we’re faster,” Nunes says, with some results returned in as little as 24 hours. It has solved a lot of cold cases and works with hundreds of law enforcement agencies nationally, including the Florida Department of Law Enforcement. Nunes and Charlton say it ranks second among labs nationally because of continued investment in technology.

Panelists say they seek to recruit locally, but sometimes have to go out of the area for specialized talent. There is hope that, over time, the talent pool will continue to grow and lessen the need for out of market recruiting.

Michael Hudak, director of human resources for SHL Pharma, says he and one of the company directors have visited local colleges to increase the number of life sciences degrees. Nova Southeastern University is just starting a life sciences degree program.

The tricky part is matching the number of graduates with the number of jobs open with local companies in a still-emerging sector. If the graduates can’t find jobs here, then they end up leaving.

Gearing up the programs is an extensive process, and each university is different in how it’s organized, says Andrew Duffell, president of the Research Park at Florida Atlantic University. “But we’re definitely moving in the right direction and as all of you, as employers, hire two or three or half a dozen people every couple of years, you’re developing that future talent.”

Ramin Rafiei, director of digital health care at SHL Pharma, says the company has a program that brings on graduate researchers to complete their thesis work. So far, all of the students gone on to work with the company, which is a win/win for students, their academic sponsors and SHL.

Nunes says DNA Labs finds its technology is moving faster than what police departments have to work with. It has partnered with Keiser University to provide leadership on new trends. That helps its graduates, who go on to be crime scene investigators.

However, the need for experienced talent has resulted going out of state for three recent hires. Letting employees work virtually helps.

Duffell says most of the principal investigators with major grants at Scripps and Max Planck were from out of the area, but beyond those two dozen people, the vast majority of employees came from Palm Beach and Broward counties. Many of them were educated at the Biotech Academy at Palm Beach State College.

At Vigilant, CEO Bill Brodie has a background in Texas and the West Coast, chief medical officer Michael Donovan is a professor at the Icahn School of Medicine at Mount Sinai in New York City, and regulatory vice president Kriss Foss is from the San Diego Area.

However, the company’s scientific founder and chief scientific officer is Elizabeth Franzmann of the University of Miami. She conducted innovative clinical research on salivary biomarkers for head and neck squamous cell carcinoma.

Peña says Stimwave is using the Handshake career development and recruiting platform that’s offered via FAU and FIU. It recently provided a tour of its facilities to show students what it does. Recruiters are used to help fill clinical specialist roles.

Perryman of Stimwave says the company has been able to find many employees in South Florida and has recruited mechanical engineers to South Florida. “If they’re coming from a cold climate, they love it,” he says.

There is a benefit to not having a lot of competition for specialized talent, because it can help with retention, Hudak says. Some of the employees it lost have moved back to the Northeast to be with their families.

There’s also the matter of funding for life sciences companies.

Duffell says more investors from outside the region are looking at life science companies here as they become better acquainted with the cluster. “We’ve seen the amount of capital raised per company increase over time and the pedigree of the investor increase as well,” he says. One challenge is getting seasonal and retired investors to realize there are opportunities here and they don’t always have to look back to the Northeast. “That’s an area where we still need to do some work. But it’s improving and certainly over the last 15 years that I’ve been active in the life sciences industry, we’ve seen the capital infusion increase exponentially.”

Perryman says Stimwave’s board of directors includes some of its investors. “We’ve raised right around close to $30 million. The company is a private company at this point. That may change. I can’t talk too much.”

Holt says it would helpful if the state had something like its previous innovation fund, which was used to help recruit Max Planck and Scripps.

“Not that we want to use discretionary dollars for each and every project, but I think having that option makes us more competitive,” Holt says. “I think what we’re seeing now sends the wrong message, from an optics standpoint being that we have limited the number of programs we have.”♦

• Rob Hamilton, chief financial officer for Vigilant Biosciences, a medical device company in Fort Lauderdale that has raised $30 million to help with the early detection of oral and oropharyngeal cancer.

• Andrew Duffell, president of the Research Park at Florida Atlantic University, which bring entrepreneurs, innovators and researchers together with the students and faculty of FAU to promote research and economic development throughout South Florida. It has locations in Boca Raton and Deerfield Beach.