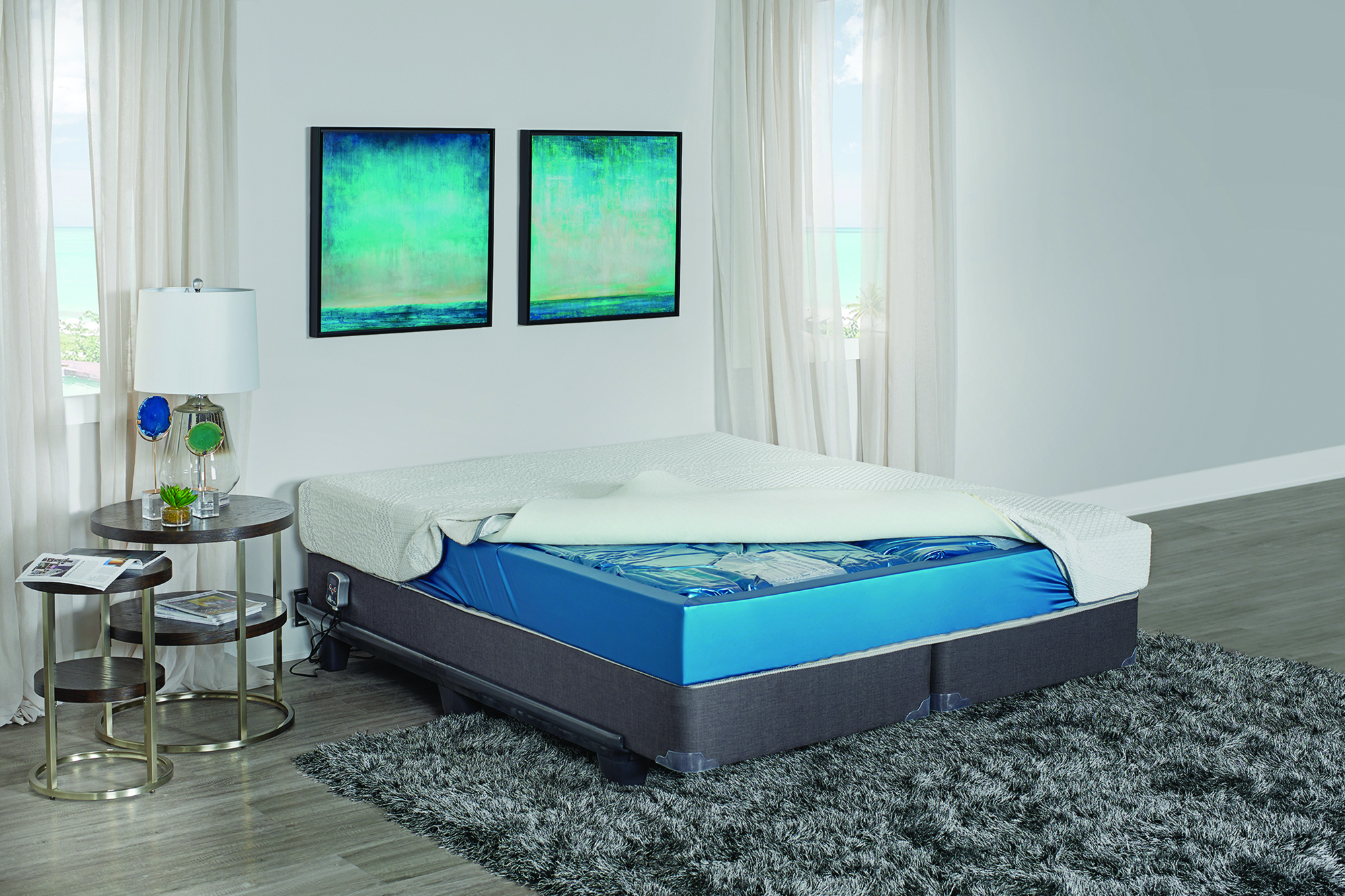 The return of the waterbed, in all of its contemporary splendor, makes waves at City Furniture

Keith Koenig could have any mattress he wants, but he continues to sleep on a waterbed.

“Steel springs eventually compress, as does all foam,” he says. “But water never changes.”

The CEO of City Furniture and his wife, Kelly, used their last waterbed for 18 years despite Koenig’s company not even selling them anymore. That is, until now.

In June, the furniture company launched a newly reimagined version of the waterbed—called Afloat—at three City Furniture locations, including the Sawgrass store in Tamarac as well as in West Palm Beach. The comeback marks the waterbed’s 50th anniversary since being created. But this isn’t some water mattress from the 1970s—this one has a few new tricks.

“All these advancements were not available 20 years ago,” Koenig says. “And they significantly improve on any prior waterbed ever made. That’s why I believe Afloat is not just the new waterbed—it is the best bed ever.”

For Koenig, waterbeds are actually in his blood. His late brother, Kevin, founded City Furniture—which was originally named Waterbed City—in Fort Lauderdale in 1971. Keith joined the business a year later, and the brothers became partners by 1975. Koenig said it was the right time for a reboot because the bed introduces new technology while addressing old health concerns.

“Millennials care about health and comfort like all people do,” he says. “Everyone understands that less pressure on the body can yield reduced tossing and turning. When they understand Afloat reduces tossing and turning and is amazingly comfortable—plus offers temperature control—they get very interested. They realize, just as my generation did, that a waterbed can be great for your health.”

Koenig says he also sees his fellow baby boomers returning to waterbeds, too. “Baby boomers like me are coming back in saying, ‘I always loved my waterbed.’ And they are buying Afloat.”

The bed comes in a range of models and price tiers, starting at $2,000 and going up to $3,300. Afloat eliminates old-school hard frames, leaky systems and the potential build-up of dust mites, bedbugs and other allergens.

Afloat is the first waterbed City Furniture has carried since 2001, and although Koenig says the store’s name won’t be reverting anytime soon, he still acknowledges the revival as a proud moment.

“Everyone at City Furniture was excited when they heard we were bringing waterbeds back,” he says. “Everyone in our company is pretty proud that we started as a little waterbed store in 1971 and that we morphed into City Furniture.

Some waterbed facts and Afloat notes, courtesy of Hall Flotation, the company that manufactures and markets the line.

History lesson: Charles Hall (Left) invented the waterbed for his master thesis in design school at San Francisco University in 1968. It was patented three years later.

Peak sales: By 1986, 20 percent of all mattresses sold in the United States were waterbeds.

Why waterbeds: Hall Floatation says, “Our bodies are more than 70 percent water, so you have two liquid mediums working in harmony. While our body temperature is 98.6 degrees, our skin temperature is about 5 degrees cooler. We want to sleep in an environment that is compatible with our surface temperature.”

Afloat models: The waterbed comes in a queen, king and dual king (the latter, with two separate water mattresses, each with temperature control). Models are available in “pure” or “firm.” The firm includes a 1-inch temperature-controlled memory foam layer between the mattress and cover.