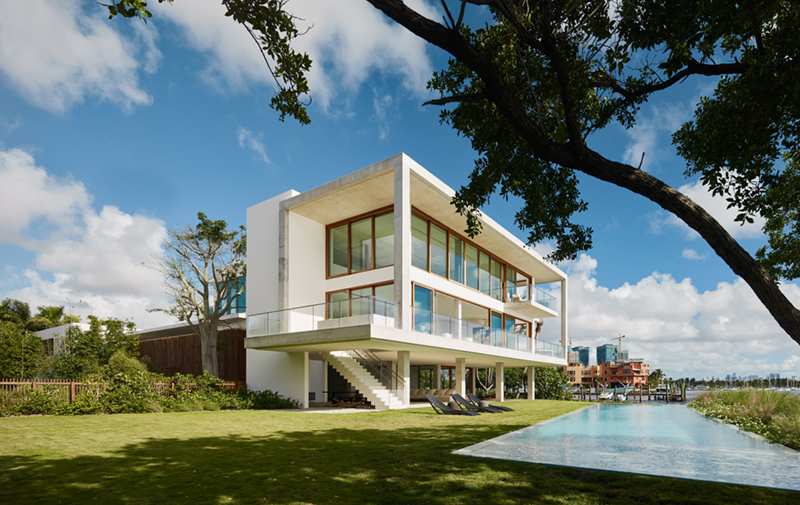 Patrick Lee was frustrated working as a consultant for the Four Seasons Hotel Miami. He was hiring contractors to do work, and they weren’t operating the way he wanted.

Finally, he spoke up to the hotel’s owner, Millennium Partners. “We are hiring these general contractors and I feel I am fighting them all the time,” he said. “I have a license. Can I do it myself?”

Lee got his wish and, over the past 11 years, he has grown Shorecrest Construction into a $10 million annual company with 16 employees.

Shorecrest is a general contractor known for bringing a high degree of craftsmanship to commercial and residential projects.

One of the most prominent examples is Casa Bahia, a 13,483-square-foot, ultra-luxury, tropical-modern home in Coconut Grove. It hit the market at $50 million last fall and recently was priced at $43 million as market conditions cooled in the Miami area.

Casa Bahia, which is on Biscayne Bay, was designed by Zyscovich Architects and filmmaker Alejandro Lanes. It won an Architizer Popular Choice A-plus Award in the Architecture and Water category.

One of its signature features is a stairway that steps through a pond and then seems to float unsupported up to the next story.

Casa Bahia is an example of how architecture in South Florida has moved from Mediterranean Revival to precise, modern design.

“People see it as simpler, but it’s not. They have taken away hiding places for imperfections. There’s no crown molding to hide it or baseboards to hide it,” says Lee, Shorecrest’s president.

Lee first became familiar with construction when he was living in a master-planned community that was being developed near his childhood home of Plant City, near Tampa. He had a couple of friends who majored in building construction at the University of Florida, which turned into his major as well.

After working in Tampa and Orlando, he came to Miami to work on the Four Seasons for Bovis, one of the giants in the construction and construction management field. The Four Seasons was held up because of Federal Aviation Administration height concerns, so Lee switched to being a consultant during the delay. (At 789 feet, the Four Seasons recently lost its crown as Miami’s tallest building to the soon-to-open Panorama Tower, which stands at a reported 868 feet.)

Between 2006 and 2017, Shorecrest has had an array of projects at the Four Seasons, including renovating the pool deck and the Edge restaurant, redoing some office tower amenities and working on units.

Lee says he has learned from the shortcomings of other contractors.

“A lot of those guys weren’t systems-based. They made a lot of promises that they weren’t following up on. They weren’t transparent in how they were doing business. You often felt like you weren’t getting what you were paying for,” he says. “The workers weren’t the problem—it was more the supervision either spread too thin or workers were not given clear directions on what expectations were.”

Lee steadily has built his company’s infrastructure—whether it was hiring his first construction superintendent and a receptionist and now having a controller, vice president of operations and an in-house project estimator.

He also has built a stable of trusted subcontractors, such as specialists in millwork and electricians who are versed in smart-home technology.

Shorecrest teamed with renowned interior designer Andrew Sheinman of Pembrooke & Ives to tackle a makeover of a 7,000-square-foot condo on Fisher Island. The renovation presented a lot of logistical challenges, including being reachable only by boat.

“People joke that it’s the only one finished in one season on Fisher Island,” Lee says.

Lee has also put his stamp on Shorecrest’s headquarters at 48 NW 25th St., in Miami’s Wynwood neighborhood. It has an open, airy design, and Lee was able to squeeze in more space by adding a partial mezzanine.

Lee looked at other locations but says, “We kept coming back to Wynwood because the energy feels good. We want artistic and creative people.”

Shorecrest typically does 15 to 20 projects a year, with four making up the bulk of the work.

When asked, Lee said he would consider making an acquisition to help grow the company if it provided a foothold in a different market. He wants Shorecrest to turn into a large regional contractor.

There’s still an important day-to-day quest, though—to go beyond craftsmanship and provide excellent experiences, not only for customers but also collaborators such as architects, interior designers and his employees.

Lee, who once was disappointed himself, doesn’t want to do that to others. ♦