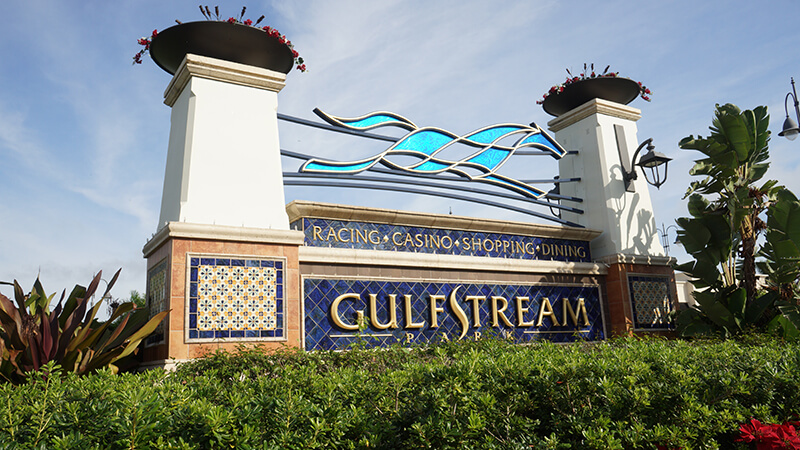 Gulfstream is a major force in the city

riving north on Biscayne Boulevard, as Aventura gives way to Hallandale Beach and Federal Highway, just to the right is a riotous spectacle, difficult to fathom—and unforgettable.

It’s an impossible-to-ignore, sci-fi-meets-animal-kingdom battle galore: a giant, snarling, winged horse punishing a huge, spiked reptile. The $30 million, a 110-foot tall, 200-foot long statue is known as “Pegasus and Dragon,” and it’s one of the country’s biggest statues—second only to the Statue of Liberty in height, by some accounts. It’s a graphic novel’s panel of an interspecies fight that occurred so long ago, it might be fable, legend or myth.

The big and mostly brass beauty was the 2011 idea of Austrian businessman and international tycoon Frank Stronach, owner of Gulfstream Park.

Engineers in China cast 500 tons of metal that were separated into 26 shipping containers for the monthlong sea journey to South Florida. Forty Chinese workers, along with four full-time translators, worked alongside 200 South Florida construction workers to put the gigantic puzzle in place at Gulfstream Park.

The Florida branch of Skanska, a Swedish construction firm, supervised the assembly of the panels onto a steel frame built in Germany. It was completed in 2014, after eight months of assembly.

The fixture depicts the universal theme of good defeating evil, but it also symbolizes how Gulfstream Park dominates its 20th-century thoroughbred racing rivals in Miami-Dade County.

Since 1939, Gulfstream has been one of America’s premier commercial horse tracks, a course famous for winter racing, where locals and snowbirds mingle with the jet set.

It competed head-to-head with stylish Hialeah Park Race Track and its flock of pink-tinged flamingos from the 1940s to 1970s. It was the Flamingo Stakes versus the Florida Derby until 1971, when a brash upstart, Calder Race Course, emerged in the northwest corner of Dade County to offer summer racing.

As the 20th century raced to a close, Gulfstream, Hialeah and Calder ran together in a triple-dead heat. But they all were losing. The attention of spectators and racetrack customers wavered from the pageantry of live horse racing.

Stronach bought Gulfstream Park in 1999 and invested heavily in the whole scene. The Stronach Group became a major gambling and horse racing company in North America, with additional holdings in Europe and Australia. It’s the largest thoroughbred racing company in the United States, in terms of revenues and holdings.

One of the world’s leading horse racetrack operators and suppliers of pari-mutuel wagering technology, the Stronach Group offers live thoroughbred racing and wagering at leading racetracks across America. These include Santa Anita Park in California; Pimlico Race Course in Maryland, which is the home of the legendary Preakness Stakes, the second leg of the Triple Crown; and Gulfstream, one of Florida’s newest entertainment destinations.

That includes horses in the $1 million Florida Derby, which locally based- and-trained Always Dreaming won this year.

Gulfstream Park became the only racetrack and casino in South Florida, concentrating on the racing business rather than casino slot machines and card games.

Next for Stronach and his daughter Belinda, chairman and president of the Stronach Group, was the creation of a horse race that dwarfed all others: the $12 million Pegasus World Cup International. The inaugural race was Jan. 28. Arrogate, with jockey Mike Smith, outdistanced 2014 Kentucky Derby winner California Chrome and earned $7 million. The 2018 Pegasus World Cup is Jan. 27 with a record $16 million purse.

“We’re on an island here in South Florida,” says P.J. Campo, vice president of racing for the Stronach Group. “Imagine having great food and drinks with outdoor dining at The Yard House and your view is the paddock where the horses parade before the big race.”

Frank Stronach was the man who was always dreaming. His bold gamble made them all come true.