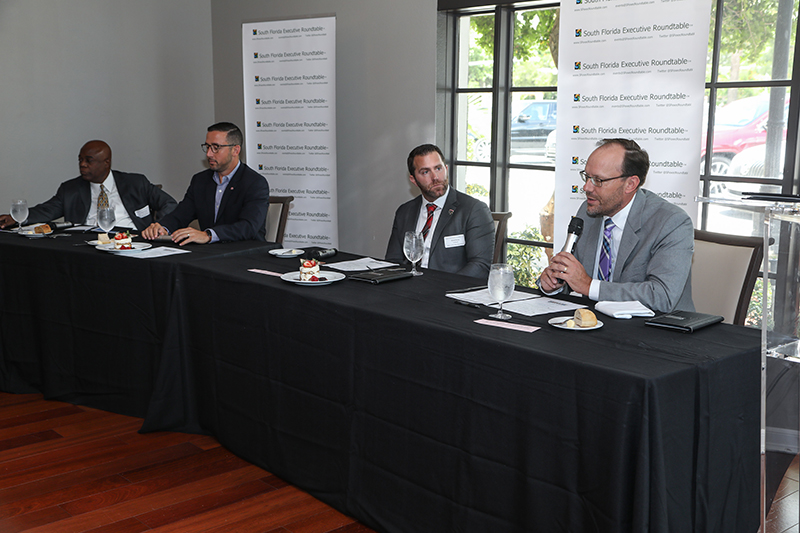 With the recent heated protests across the United States —the violent demonstrations and shootings in Charlottesville, Virginia, and the contentious disputes on what to do with the nation’s Confederate statues—race relations is on the forefront of the American public conscience. And South Florida business leaders are no exception. During the August Executive Roundtable held at the Coral Gables Country Club, the panel explored how this sensitive matter and relates to the region’s business community.

The moderator was Tom Hudson, vice president of news and special correspondent for WLRN radion and television. SFBW is the exclusive media sponsor of this executive-level luncheon.

The following transcript has been edited for brevity.

I think it would be remiss to not talk about business and race relations in this community, in this time. And Matthew, I want to start with you because you’re sitting next to me. I’m wondering how you have thought about this as a business executive and community stakeholder?

Caldwell: I do have to say we are a public entity, and our owner, Vincent Viola, was nominated as army secretary by President Trump. He wound up turning it down. I definitely think business leaders need to lead from the front. I do think there is a role for community leaders, but I don’t want to get too in-depth on it.

Gonzalez: At eMerge, we have a diverse team. And all of them have ideas and feedback, with what’s been going on over the days following what happened [in Charlottesville, Virginia]. Quite frankly, it’s been going on for the last year or so in the country. As people become comfortable, you need to have a dialogue and you need to make that part of the discussion without making it get too heated. I think for our folks, they understand they have the support and encouragement about these kinds of things. If case anyone doesn’t know what eMerge is, we are a large-scale technology conference in Miami.

We’ve had a government summit and we have had government leaders as speakers over the years. For us, it’s about balance. You need to have both sides of the discussion available within the forum. Personally, as a CEO, you need to be very careful with tying your business to your brand to any other organizations. Those are the conversations I’m having in boardrooms. I know CEOs who have walked away from certain advisory councils and diminished or got rid of councils all together.

Charnley, how about you? Your corporate title has “relations” in the title. You are directly responsible for fielding these kinds of inquiries. I imagine they bubble up to your level.

Conway: Working with UPS, we have a commitment of promoting diversity and inclusion. We really try to lead by example. I’ll say that inside of our organization we have different business resource groups that are reflective of minority groups. So we have: Women’s Leadership Council, LGBT groups, Latin groups. But more than just having those group’s inside, they are supported by people who don’t look like them to create engagement and leadership by example. And then on the external side of this, we look for partnerships with nonprofits in the community that have these different makeups. And we have charitable and grant programs that tie back into the community. From there, we do cultural assessments when we start to put people in leadership positions, particularly out of Miami with my responsibility on the international front.

We try to keep our people from talking about religion and politics and different things like that on the inside because it can become unmanageable. When I go to Mexico, I am constantly challenged on what I hear and see. And we have that same sensitivity with my Venezuelan friends and partners. We try to walk the talk and reach out, engage and collaborate with the people to make a difference. ↵