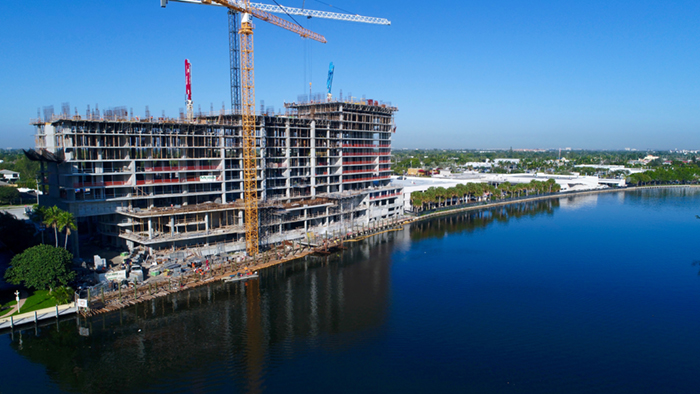 Developer Bradley Deckelbaum says construction on his Premier Developers’ Riva condominiums project should be completed sometime this summer, capping a wave of redevelopment along North Federal Highway in Fort Lauderdale.

Riva is the first luxury condominium along the highway north of Sunrise Boulevard and is along the Middle River, which will provide residents an array of watersports activities. The project was the brainchild of Deckelbaum, who found the site while paddleboarding.

“The name, ‘Riva,’ is Italian for ‘shore,’ and true to its name, we are nestled along 400 feet of peaceful and serene waterfront along the Middle River across from George English Park,” he says.

Sales at Riva indicate a growing trend for many Broward County residents: a west-to-east migration, Deckelbaum says. “We had a generation that moved out west to raise their kids. Now they’re coming back.”

He says buyers from all over are discovering what Fort Lauderdale has to offer. “People from up north, people from the upper Midwest … sales come from everywhere,” he says. “As we look toward the future, there is an increased demand for luxury residences in east Fort Lauderdale that offer walkability and decreased reliance on cars for basic, everyday needs.”

More and more stores and restaurants have been opening in the area, including Audi Fort Lauderdale, Nordstrom Rack, Trader Joe’s, Orchard Supply Hardware, Burger 21, Agave Taco Bar and Flash Fire Pizza. The street has big-box retailers, too, including Best Buy, Hhgregg, Office Depot, Bed Bath & Beyond and Dick’s Sporting Goods, and Target, which is in the Coral Ridge Mall.

The growth comes as no surprise to Deckelbaum.

“While this area has always had hidden gems, such as Casa D’Angelo and Croissan’Time, the investments that have been made in many of these properties has increased both the visual appeal and the interconnectivity while bringing in more upscale and high-quality retailers and restaurants,” he says. “The effect is a more-pedestrian feel and a much stronger community, with a commercial environment that much better serves the local residents.”

He says the majority of Riva’s buyers plan on living there themselves, as opposed to renting out their units. “They’re excited to move in here,” he says. “We chose to build in an area, which I believe is a unique waterfront oasis in the heart of the city.”

Deckelbaum sees a trend toward continued future growth in the entire area surrounding Riva. “The neighborhood anchored by Federal Highway between Sunrise and Commercial boulevards has evolved to accommodate the upscale residents who live in Coral Ridge and the other adjacent waterfront communities in Fort Lauderdale,” he says.

Just driving along Federal Highway in the area, one can already see a change, he says, pointing out how the area is becoming more and more visually attractive with the recent growth and development. He’s optimistic about the area’s future as well.

“While the beach developments may have beautiful ocean views, they are not able to offer our level of convenience. With Riva, we found the perfect location for waterfront living and downtown amenities,” he says.

“There’s so much happening and about to happen,” Deckelbaum says. “I think this area of Fort Lauderdale is going to become more of a neighborhood. It’s got great shopping, great restaurants. It’s all there with more coming.”

Deckelbaum says it’s the “wide-open spaces inside and out” that Riva buyers are finding most attractive. “The large design makes it easier to move,” he says, adding that people enjoy proximity to the beach as well as downtown. “It’s the peace and quiet of this little enclave.”

Riva includes its own watersports center, providing residents easy storage for kayaks and paddleboats, plus a dock to launch directly into the Middle River. ↵

Riva will have an aquatics center